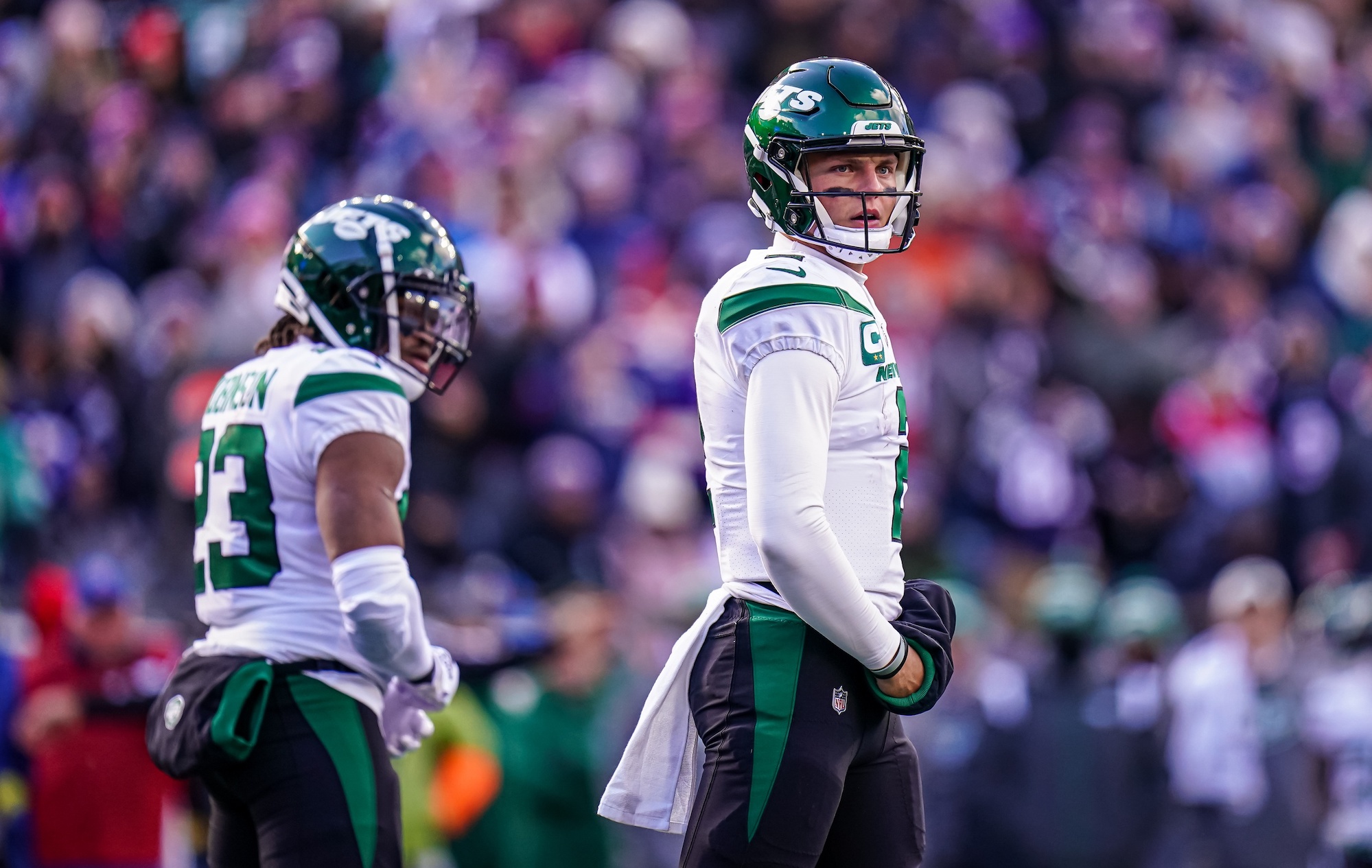 In his first couple of years in the NFL, New York Jets quarterback Zach Wilson has done little to establish himself as the solution to their quarterback problem. While he has had his flashes of talent in a few of his first 20 career games, Wilson has yet to take things to the next level to confirm he’s a viable long-term answer under center.

After yet another dud against the New England Patriots on Sunday, there are only more questions about the second-year quarterback’s future as the Jets’ signal-caller—especially after his coach wouldn’t commit to starting him going forward. A couple of them are, “how much is Wilson holding his team back?” and “should the Jets be ready to draft a new quarterback in the 2023 NFL Draft?”

The answer to the first question, especially after just how poor his performance was in New England on Sunday, is almost certainly “yes.”

Wilson had maybe the worst start in an already lackluster career on Sunday, unable to do anything against the Patriots all day long. As the Jets’ defense kept the team in the game, allowing just three points all day, Wilson and the offense could not get things going. The quarterback completed just nine of his 22 pass attempts in the game for 77 passing yards. In the entire second half, the Jets had just two (2!) yards of offense. Wilson deserved a lot of the blame for that too, unable to complete more than four passes in the second half with some especially bad misses sprinkled in. What’s worse, instead of taking responsibility for the offense’s shortcomings after the game, Wilson denied any culpability.

.@Connor_J_Hughes: "Do you feel like you let the defense down at all?"

So if Wilson’s performance wasn’t bad enough to “lose the locker room” like a bad or failing head coach, his post-game comments certainly did. As a player at one of the most important positions in all of sports, Wilson’s job as a quarterback is to be a leader of the team. Failing to do so on the field as the leader of the offense and then failing to take responsibility for his abysmal performance is doing just the opposite of that.

This leads us to the conundrum that the Jets—and particularly their general manager, Joe Douglas—are facing. Wilson clearly is holding the offense and the entire team back from winning meaningful games down the stretch. At the same time, the team invested a top-two draft pick on him in the first round of 2021’s draft. To give up on him this early is to admit a colossal mistake on the part of the front office.

At the end of the day, the Jets are still 5-2 this year when Wilson starts, but games like Sunday’s matchup with the Patriots showed off all of his shortcomings and call into question whether New York is winning despite their quarterback. The sophomore still needs to step up and show some level of development over the last few games of this year—if he gets to start. The winnable games still on the schedule—against the Chicago Bears, Detroit Lions, and Jacksonville Jaguars—will provide him an opportunity to show that he can win the games that he should. But if he continues to struggle even against weaker opponents without showing that he can make plays for the offense when he’s called upon, it will spell the beginning of the end for his time in New York.

As Wilson’s duds mount, the Jets need to be keeping an eye on the 2023 quarterback class, even if it doesn’t necessarily mean pulling the trigger on day one of the draft.