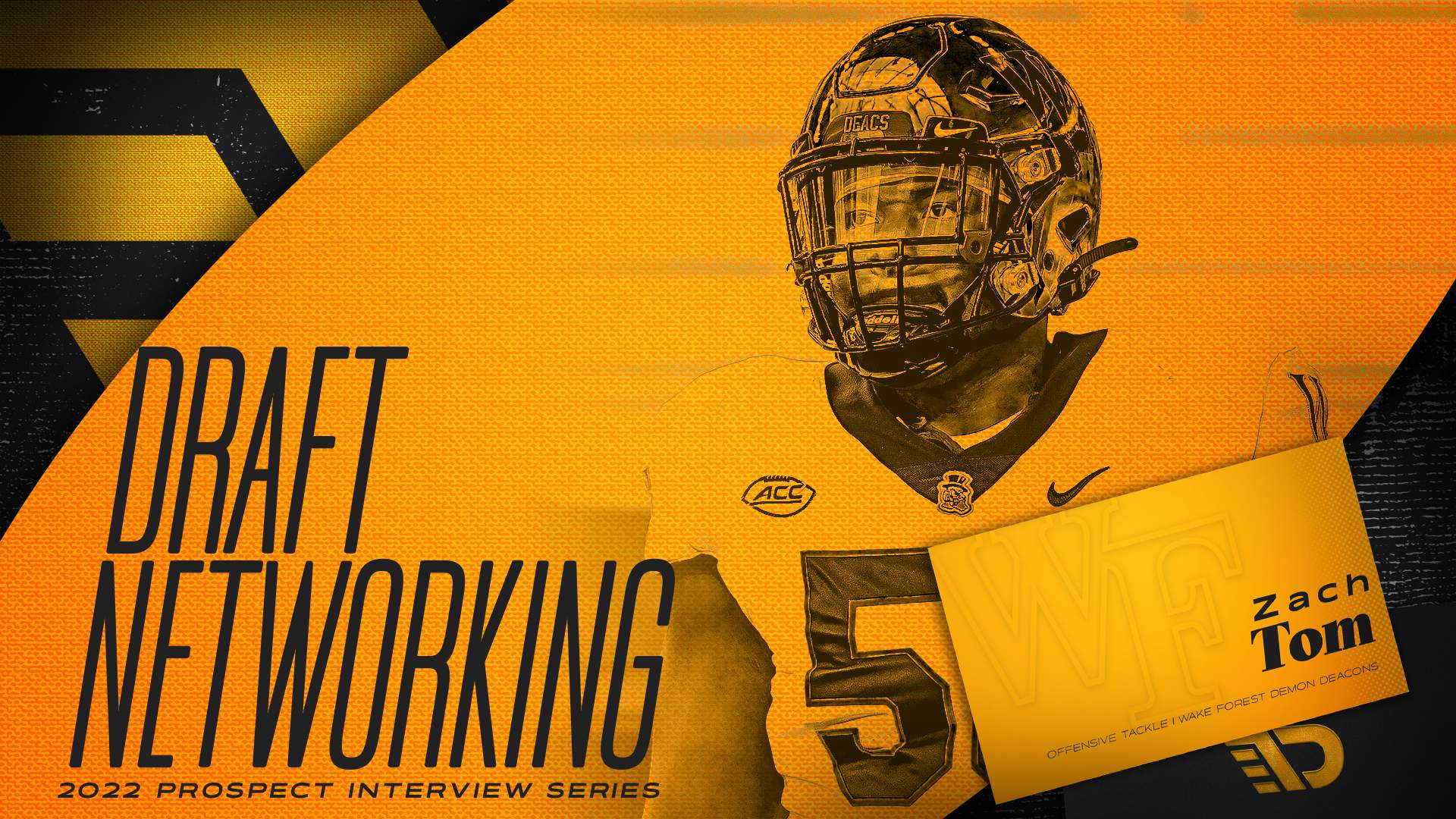 Versatile offensive linemen will attract a plethora of interest from all 32 teams throughout the 2022 NFL Draft. Employing utility linemen that can play multiple positions makes a coach’s job easier on Sundays. It’s a quality that should make the services of Wake Forest’s Zach Tom in high demand.

Tom appeared in 48 career games with 37 starts while playing both the left tackle and center positions. Tom is a high-level athlete that dropped jaws by running the 40-yard dash in a blazing 4.94 seconds at the NFL Scouting Combine.

Tom recently spoke exclusively with The Draft Network regarding the differences between playing tackle and center, what NFL teams have said about his versatility throughout the pre-draft process, his success as a pass protector, his experience at the combine, and so much more.

JM: You depart Wake Forest for the NFL after appearing in 48 career games with 37 starts. You’re incredibly experienced. How do you think your experiences at Wake Forest helped prepare you for the next level?

ZT: Anytime you’re able to play that much football, especially in college, it does nothing but help you become a better overall player. It helps you refine your game. Obviously, the more experience you have, the more you learn about the game. Those experiences helped me adjust and improve my techniques along the way. It’s helped me out tremendously. I was blessed enough to stay healthy and play as much football as I did at Wake Forest. That’s a big reason why I had a successful collegiate career. Anytime you’re able to do something with such repetition, you will naturally get better at it. I perfected my technique.

JM: You totaled 3,107 snaps and you were only credited with giving up two sacks throughout your entire college career. What is it about your game that allowed you to play with such success in pass protection?

ZT: The biggest thing was just being consistent. I always made sure that I was taking full-speed reps, even in practice. You practice how you play at the end of the day. When you take practice seriously, those good habits you’ve developed will translate to the game. A big part of my game focuses on being a consistent performer. It’s about more than just playing on the fly. It’s about revisiting your training habits and personal growth. That’s a big reason why I was able to be successful. Consistency of technique is a huge deal for me, especially in pass protection.

JM: I’m curious if that makes you believe your game is more advanced in pass protection currently, as opposed to run blocking?

ZT: Yeah, I would say that. I consider myself to be an elite player in pass protection. I think there are areas of my game that need to improve, especially in the run game. That’s also true in pass protection, but it’s more so relevant as a run blocker. I’m always trying to get better in every area of my game.

I think I have some technical issues to clean up as a run blocker that will easily be corrected at the next level. The scheme we ran at Wake Forest was very RPO-based. The NFL will obviously run more pro-style systems, so there are some technical aspects of my game that will need adjusting. I’ll get those technical things cleaned up in the run game.

JM: You possess the skill set necessary to become a complete player. I imagine versatility is a term you’re routinely hearing throughout this process. You’ve played a bunch of left tackle and center, and there’s reason to believe you can play guard, too. Are teams bringing that up during your one-on-one meetings?

ZT: Yeah, essentially every single team I’ve met with has discussed how my versatility is a huge strength of mine. That’s one thing I take a ton of pride in. I’m capable of playing all five positions. That’s something I’ve been working on for a long time, and I’ve become even more capable of doing so during this pre-draft prep period.

Outside of training for the NFL Scouting Combine, I dedicated a lot of time to fine-tuning my craft as a versatile lineman. Being able to play all five positions at the next level will do nothing but help you make a successful transition from college to the NFL. That’s definitely something I take pride in.

ZT: To be completely honest with you, most teams see me as a center. That’s where I’m expecting to play. Obviously, if the team that drafts me sees me at tackle, that’s what I’ll play going forward. Like I said earlier, I consider myself to be a versatile player. I think I can play all five positions at a high level. It doesn’t really matter to me personally. Most teams are telling me that I’m going to play center going forward, so that’s what I’m expecting.

JM: That makes sense. What are some of the biggest differences between playing tackle and center? They’re obviously two very different positions, but I’m curious what comes to mind for you immediately.

ZT: At tackle, the types of players you’re going up against are obviously extremely different. You’re squaring off with longer, more athletic EDGE rushers. At center, you’re going up against shorter, bigger defenders. They’re obviously not as athletic at center, but they’re typically stronger. I would say that’s the biggest difference. Third downs are a big difference as well. You’re on an island at tackle. At center, you typically have a bit more help.

Another thing about the center is that you’re the main communicator up front. That’s a huge responsibility that an offensive tackle typically doesn’t have to worry about. It’s a huge part of playing center, though. Those are a few key differences that immediately come to mind for me.

JM: Earlier you talked about gaining knowledge on your future position through team meetings. Who are some of the teams you’ve met with throughout the process?

ZT: The New Orleans Saints and Miami Dolphins came to Wake Forest to work me out in person. I’ve had a bunch of virtual meetings, somewhere between 15 and 20 virtual meetings. I can’t recall every team I’ve met with, but the Green Bay Packers, Seattle Seahawks, Buffalo Bills, New England Patriots, Tennessee Titans, and Cleveland Browns come to mind.

JM: There’s a lot of interest in you and it’s easy to see why. You were electric at the NFL Scouting Combine. You ran the 40-yard dash in a blazing 4.94 seconds, and you also leaped a 33-inch vertical. Do you feel like you surprised some people in Indianapolis?

ZT: I definitely did. I’ve always taken a tremendous amount of pride in my overall athleticism. I knew what I could do. I knew I was going to go to the combine and be one of the best overall performers among my position group. I’m sure there were some people and teams that were surprised by my final results and how well I was able to perform overall, especially given my weight. I’m sure I surprised a bunch of people in Indianapolis. I fully expected to perform well at the combine.

JM: You did just that. I’ve really appreciated your time today. What kind of impact is Zach Tom going to make at the next level?

ZT: Like I said earlier, I’m going to be that versatile player that’s capable of playing all five positions at an extremely high level. I’m going to be a consistent performer that you can count on. I’m going to always put my best foot forward and give full effort. I’m gonna be a guy that stays in the film room. I’m going to quickly learn the playbook and understand what the expectations are. I’m excited to help my pro team win a bunch of games.