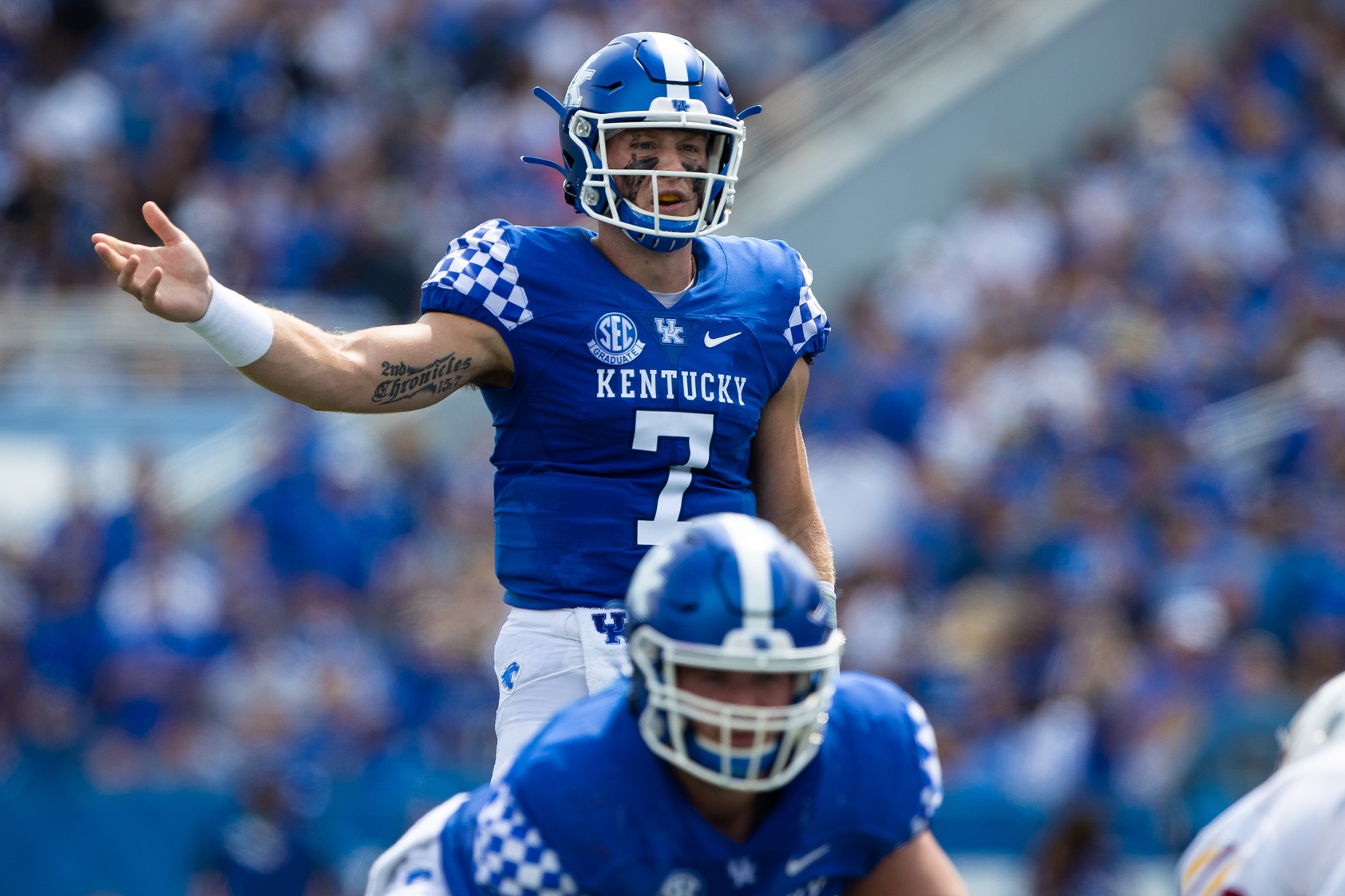 Will Levis On His Goals For 2022, What He’s Working To Improve

The 2022 NFL Draft featured a questionable group of quarterback prospects. The 2023 class of quarterbacks appears significantly deeper than its predecessor. Several high-end prospects will jockey for positioning throughout the course of the upcoming college football season. One of the most promising players is Kentucky quarterback Will Levis.

Levis possesses all of the tools necessary to develop into a franchise quarterback at the next level. Lewis recently spoke exclusively with The Draft Network regarding the upcoming campaign, transferring from Penn State to Kentucky, working alongside coach Rich Scangarello, his offseason training regimen, and so much more.

JM: You decided to transfer from Penn State to Kentucky ahead of the 2021 season. It’s safe to say that your decision has already paid off. I don’t think there’s any room for debate left. Now that you’ve had plenty of time to reflect on that, how would you look back on it?

I was at Penn State for a few months to finish my degree, and I wasn’t with the team. I was training on my own to maintain my body and whatnot. I was by myself for the first time in my college career. It was scary, but it became a very rewarding experience. I got to Kentucky and worked my tail off to get myself to where I’m at today. It was a process to get things in place. It’s cool to look back and see how much things have changed for me. A lot of that weight is off my shoulders nowadays compared to then.

JM: I love the way you’re able to look back on that through a variety of lenses. You really settled in alongside Kentucky Head Coach Mark Stoops and Offensive Coordinator Liam Coen last season. Coen departed the program for an opportunity with the Los Angeles Rams. Stoops hired a fantastic replacement in coach Rich Scangarello, who’s been described as a quarterback whisperer. How do you view that situation given that you really thrived under coach Coen last season?

Will Levis: With coach Coen leaving, I think we were all anticipating that his departure was a possibility. I was very confident that the only opportunity that could lure him away from Kentucky was that specific opportunity with the Rams. I was mentally prepared for it to happen. Of course, it did happen. I can’t control it.

I’m obviously ecstatic for coach Coen. He deserves that opportunity. I needed to make sure that I was comfortable with all potential outcomes. I wanted to feel great about our ability to hire an appropriate replacement for him, which we did in coach Scangarello.

Coach Stoops was amazing throughout that process. He kept me abreast in relation to who they were talking to and considering to replace coach Coen. They were very clear in terms of what type of coach they wanted to hire. I was extremely confident in coach Scangarello’s abilities once the process of speaking with him began taking place. The decision to hire coach Scangarello was made pretty easily and quickly. I definitely think we got a good one in coach Scangarello.

JM: It certainly feels that way from all perspectives. What are some of the things coach Scangarello has you working on this offseason, and how do you plan to carry those things into the Fall?

I have to use my body efficiently in a manner to make those throws with terrific timing and anticipation. It starts from the feet up. Mastering and timing up throws with our concepts and understanding the timing of everything is probably the most important thing for me this offseason.

Coach Scangarello’s ability to coach quarterbacks through the previous experience he’s had alongside a long list of successful quarterbacks speaks for itself. It gives him so much credibility. Whenever he speaks, our entire team listens. He has our undivided attention in the meeting room. Good things come out of his mouth when he speaks (laughs).

JM: Absolutely (laughs). What are some of the responsibilities you had at the line of scrimmage last season, and do you expect to be afforded the same liberties under coach Scangarello? That’s something I’m very curious to touch on.

Will Levis: We operated in a similar manner to how an NFL offense would operate in terms of what was asked of me as the quarterback. I had the responsibility of calling audibles. I had the freedom to change or flip a play.

I think we’re going to take that to the next level this season. I think even more will be expected of me as our quarterback in 2022, and I may be allowed to do some different things. Whether that includes making the protection calls, or more diverse pre-snap audibles for certain plays and opportunities, we’ll see. I’m really looking forward to that because I know I’m definitely capable of executing those things. It’s going to further prepare me for the demands I’ll encounter as a quarterback at the next level.

JM: It sure will, and we’re excited to see you take that step forward. As a dual-threat quarterback that can hurt defenses with both his arm and legs, how do you balance being aggressive with taking what the defense gives you?

Will Levis: That’s a great question. It’s 100% so important. I can approach that question in two different ways. From a throwing perspective, it was difficult for me to receive a deep-developing shot play and turn that into a check-down last season (laughs). As a quarterback, we have to understand that when we get a deep shot called, it doesn’t always necessarily mean you have to take a deep shot. Most of the time, the best decision is to take your medicine and check it down to the running back, or whatever your check-down option is.

That’s an area of my game I can improve in. I’ve worked on that throughout this offseason specifically. I think I’ve made strides.

As for running the football, I had to learn and navigate some aspects of that as well. Being the physical, athletic dude that I am, I need to use that part of my game to my advantage. At the same time, I have to be smart and avoid taking hits when they’re not necessary. That’s something I didn’t really understand last season if you watched me play (laughs). I have to understand that my health means as much as anything to our team. I have to be a smart runner. That may involve sliding a little more often (laughs).

JM: Spoken like a quarterback who took one too many hits last season (laughs). When we turn the tape on, we see a quarterback that can hurt a defense off-script. That’s so important in today’s game, especially at the NFL level. What are your thoughts on that and how did you develop that aspect of your game?

Will Levis: It’s all about experience. I think it’s something you can only gain through experience. It arrives via in-game reps that allow you to go off schedule and trust your gut. You have to read and react in a similar way.

We work our scramble drills in practice. It can’t be something that’s always 100% on the fly. We work on those types of situations. We learn that on the practice field, and we take it over to individual drills, too. When those situations arise in a game, it’s very rare that you’re going to get a clean pocket and a clean look for a play. You have to be prepared to improvise. My physical traits certainly help, but my cognitive ability to see things through, and to anticipate things is really what makes those plays happen.

JM: That makes a ton of sense. Is there a game on the upcoming schedule that you have circled? Any opponent you’re particularly excited for?

Will Levis: As of now, I’m just excited for our first game of the season [against Miami (Oh.) on Saturday, September 3]. I’m not focused on the overall schedule right now. I’m focused on getting my body, and our bodies ready for camp and to play ball. We’ll take things one game at a time. We can’t overlook any of our opponents. We have to make sure we treat every opponent the same.

JM: What would you say is the best game you played in a Kentucky jersey last season?

Will Levis: I’d probably point to the game against LSU. I think about how I operated throughout that contest and how efficient we were on offense. It felt like we were firing on all cylinders. There weren’t many things that went wrong for us in that game. We played an extremely efficient game, both throwing and running the ball. I think that was my best performance overall.

JM: I’ve appreciated your time today. In closing, what are Will Levis’ goals for the 2022 season?

Will Levis: We talk about it every day. We want to play for the SEC Championship. We want to be in Atlanta come December. That’s the next step for our program to take. We’ve been looking forward to that. We want it to happen this year. That’s the goal we have in mind. As long as we have a great collective season and we achieve the things we know we’re capable of achieving, everything else individually for me or whatever, it will all fall into place.