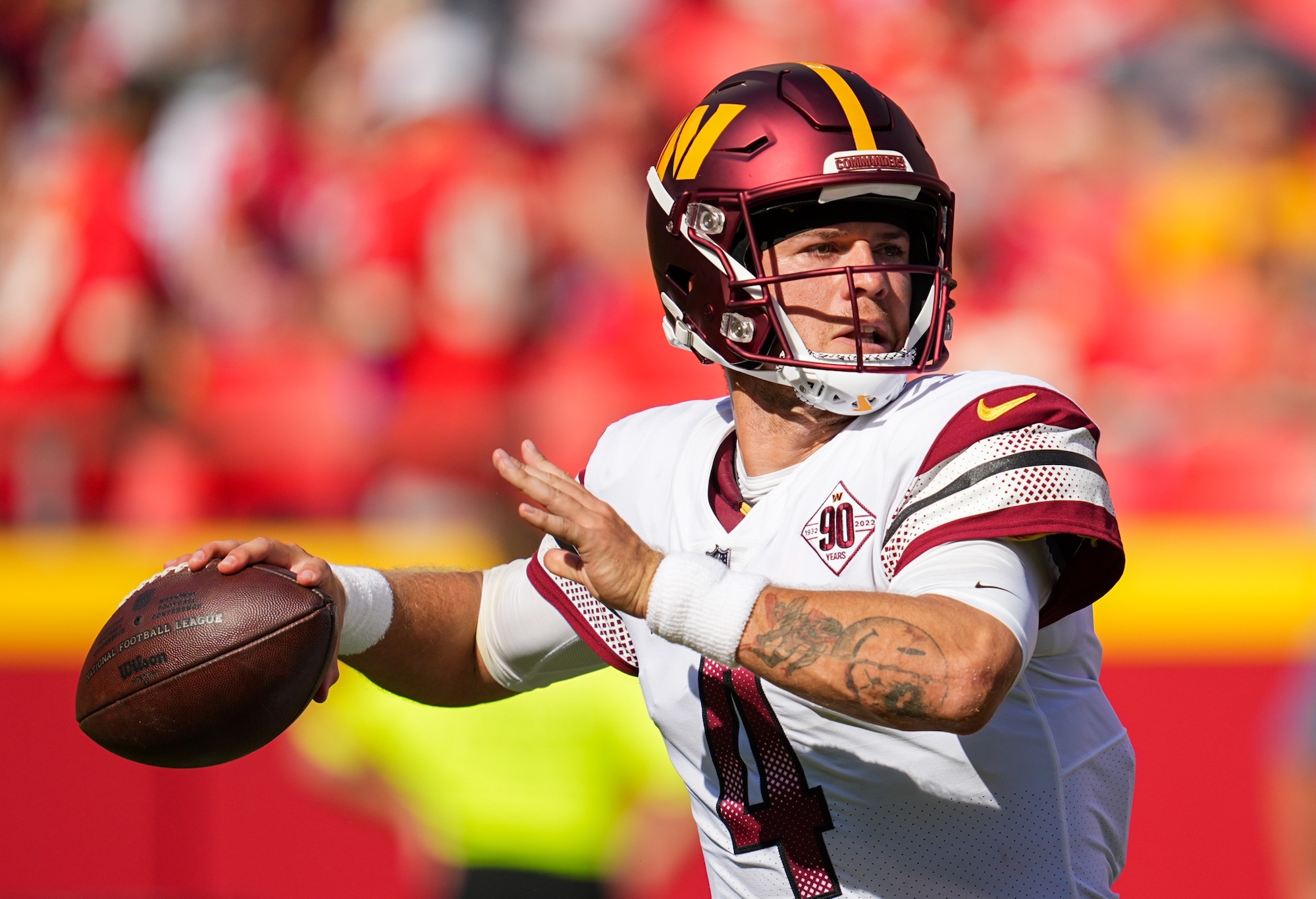 How Long Can Taylor Heinicke Hold Off Sam Howell?

Folks, here we are again. Another week, another year, the carousel just hasn’t been able to stop under center for the burgundy and gold. A franchise once again under turmoil both on and off the field, a 2-4 record through six weeks has raised questions about both the immediate and long-term future of the Washington Commanders—a question that has loomed since the turn of the millennium. And now, as Aaron Rodgers and the Green Bay Packers head to town, an all too familiar face will once again take hold of the offensive reins for head coach Ron Rivera.  A 15-game starter last fall, quarterback Taylor Heinicke has done nothing more than hold a clipboard behind Carson Wentz this fall. While the first two weeks of the season showcased a version of Wentz Washington faithful immediately rallied around, the last month of the campaign hasn’t been as pretty despite a laundry list of outliers that have affected his performance.

Following the Commanders’ Thursday night win in Chicago, the keys of the offense have now been turned over to the once XFL standout following the news of Wentz fracturing his ring finger on his throwing hand. A timetable that could see him out for as much as six weeks, this isn’t new territory for the battle-tested Heinicke, who faced the likes of Josh Allen, Patrick Mahomes, Justin Herbert, Dak Prescott x2, Jalen Hurts x2, and Tom Brady all last season. And although Heinicke’s seven wins won’t blow anyone out of the water, seven wins in a season that contained that talent pool of quarterbacks is something to hang your hat towards his potential success moving forward.

Behind Heinicke, however, is where things get fun with fifth-round selection Sam Howell set to be activated on game day for the first time in his young career. Impressive wouldn’t be a strong enough word to illustrate the last time we saw Howell in action during the preseason. In fact, some would say it was expected if you studied him at North Carolina. A quarterback whose 2021 production provided a true window into the talent he was in the year prior with the slew of NFL talent around him, Howell’s ability to carry the Tar Heels last fall showcased a gamer that competes his tail off no matter the situation around him. Long story short, a Ron Rivera guy.

Howell was the NFL’s preseason leader in passing yards. While it was the preseason and it must be taken with a grain of salt, Howell was excellent in the significant amount of time that he saw in three outings. In an NFL exhibition debut that saw him provide a jolt of energy into the Commanders’ offense during the second half of their loss to the Carolina Panthers, Howell’s first impression was as good as it could possibly have been. Pumping throws into tight windows, confidence amongst chaos, and creating outside of structure with his legs, Howell looked the part in leading an offense—an uncommon sight in the nation’s capital.

Look, I get it, his success during three games came against opposing teams’ second and third-string defenders, but it’s the NFL and everyone is getting paid to suit up. No, he wasn’t throwing against Jaycee Horn against Carolina or lofting nine balls down the boundary against Marlon Humphrey, Marcus Peters, and Marcus Williams in Baltimore, but you produce against the 11 in front of you, and Howell did that—and then some. For Howell, while he has the ability to create outside the pocket and play sandlot ball when the time calls for it, his ability to consistently sit calmly under center with unfamiliar bodies around him are key movement skills to hone in on from his performances this summer. No, it wasn’t always easy as his 60 minutes of action against Baltimore saw him get knocked around more than he would have liked to, but it’s how you bounce back after negative yardage or a missed shot play that writes the narrative for guys in the NFL. And now, as Heinicke’s backup, he’s just one play away from NFL action.

While the Commanders’ starter could very easily be Heinicke for six weeks—and he’ll surely provide his moments of heroism—if things begin to fall off the rails even more, don’t be shocked to see Howell get time. It’s Heinicke’s ball club to lead back to relevancy as we approach Week 7, but objects in the rearview mirror in the form of Howell are closer than they appear for Washington’s newly-minted starter.