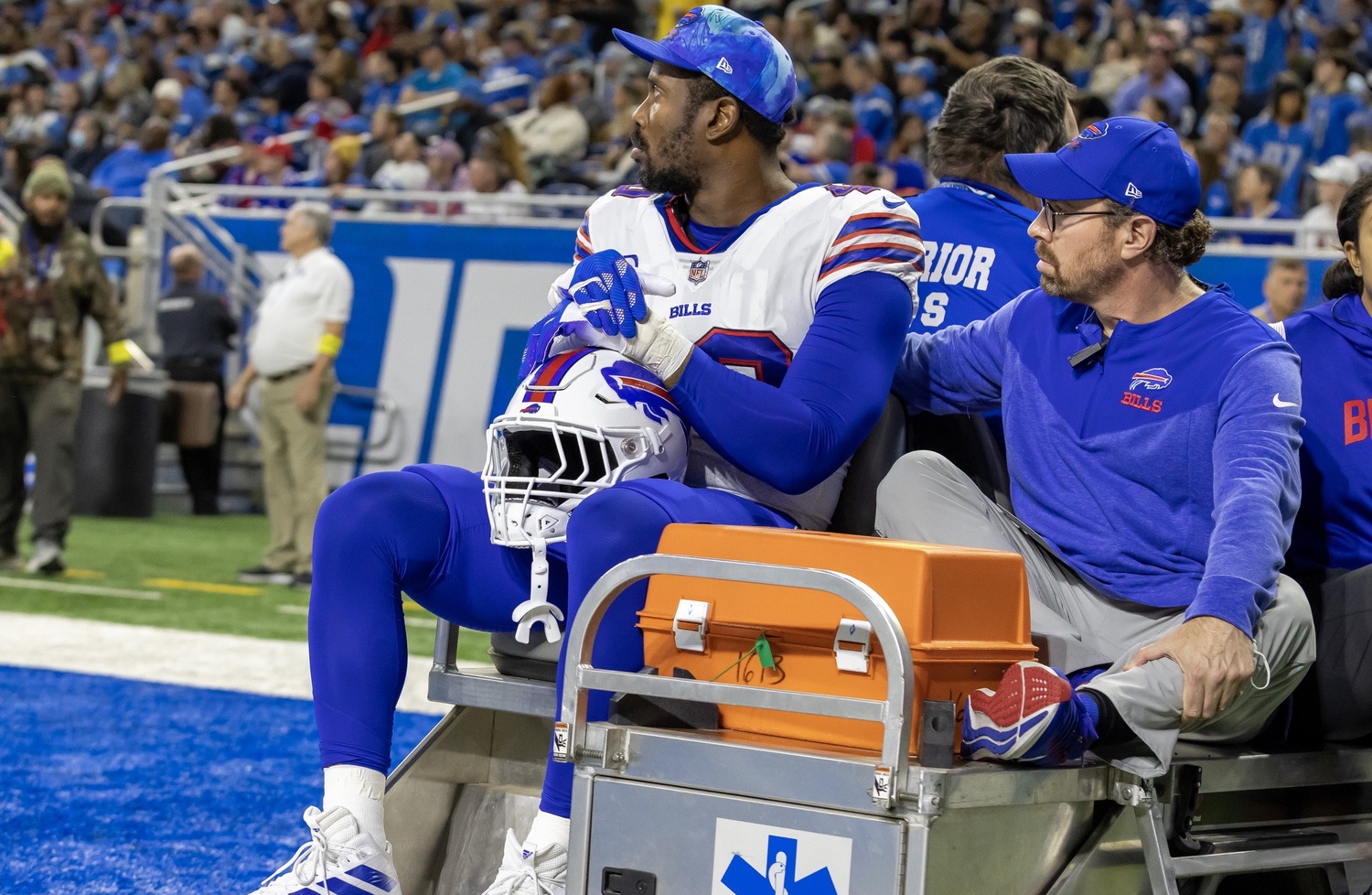 Buffalo Bills EDGE Von Miller suffered a knee injury in Thursday’s Thanksgiving victory over the Detroit Lions. Von Miller was in visible pain and was eventually carted off the field. An extended absence would deliver a sizable blow to Buffalo’s Super Bowl aspirations.

Miller, who signed a six-year contract worth $120 million with the Bills earlier this offseason, will now await further test results to reveal the full extent of the damage. Miller is likely to miss time. All parties involved are simply hoping to avoid a season-ending designation.

A future Hall of Famer, Miller has been enjoying a standout campaign thus far. Miller leads the Bills in sacks with 8.0 quarterback takedowns through 11 regular-season contests. A two-time Super Bowl champion and eight-time Pro Bowler, Miller appeared poised to record his eighth double-digit sack season this year. The DeSoto, Texas native will now hope he still receives an opportunity to reach that milestone.

Bills head coach Sean McDermott will be expecting the rest of his pass rushers to step up in Miller’s absence. The Bills possess the talent necessary to field a respectable pass rush sans Miller.

Second-year defensive end Gregory Rousseau is enjoying a fruitful sophomore campaign. Rousseau has recorded 5.0 sacks in seven showings. However, Rousseau hasn’t played since early November with an ankle injury. The No. 30 overall selection in the 2021 NFL Draft, getting Rousseau healthy and available just gained importance in the wake of Miller’s injury.

Third-year defensive end A.J. Epenesa may receive the largest opportunity to play in Miller’s spot. A former Iowa standout, Epenesa ranks third among all Bills defenders in sacks with 3.5, trailing Miller and Rousseau. Epenesa didn’t play against the Lions on Thanksgiving due to an ankle injury, however. You’re beginning to witness a theme emerge. The Bills haven’t possessed luck in the injury department this season.

Already down Rousseau and Epenesa, Miller’s in-game departure provided an opportunity for Boogie Basham. Basham, who’s typically played anywhere from 25-45% of Buffalo’s defensive snaps this season, played a season-high 53 snaps against the Lions, which accounted for 75% of Buffalo’s defensive plays. Basham perhaps possesses the most untapped potential of any of Buffalo’s ascending pass rushers. Basham, who’s recorded 2.0 sacks in a rotational role, must be more productive than he’s been.

Veteran Shaq Lawson may also be expected to apply more pressure on opposing quarterbacks. Lawson has been better than his numbers indicate, particularly as a short-yardage run defender. His sack totals (1.5) could improve should Miller be sidelined. Buffalo’s ability to apply pressure via the interior can also serve as an equalizer. The fearsome trio of Jordan Phillips, DaQuan Jones, and Ed Oliver have combined to record 4.5 sacks this season. After all, the quickest path to the quarterback is up the middle.

Miller’s injury could potentially restore additional balance to the overall makeup of the AFC. The Bills and Kansas City Chiefs remain heavy favorites to meet in this year’s AFC Championship Game. Miller recorded 2.0 sacks in Buffalo’s 24-20 win over the Chiefs earlier this season. Miller’s difference-making abilities had an impact.

The 8-3 Bills haven’t been the invincible squad they were perceived to be throughout the offseason. A plethora of injuries and untimely red zone turnovers have made the Bills beatable. The Miami Dolphins should retake first place in the AFC East with a victory over the lowly Houston Texans on Sunday.

The Bills still possess lofty expectations despite the abundance of adversity they’ve faced. The wild card round is approximately a month and a half away. The road to Super Bowl LVII may travel through Arrowhead Stadium—the Chiefs are favorites to capture the conference’s No. 1 seed. Von Miller will attempt to make a triumphant return prior to Buffalo’s inevitable postseason run.