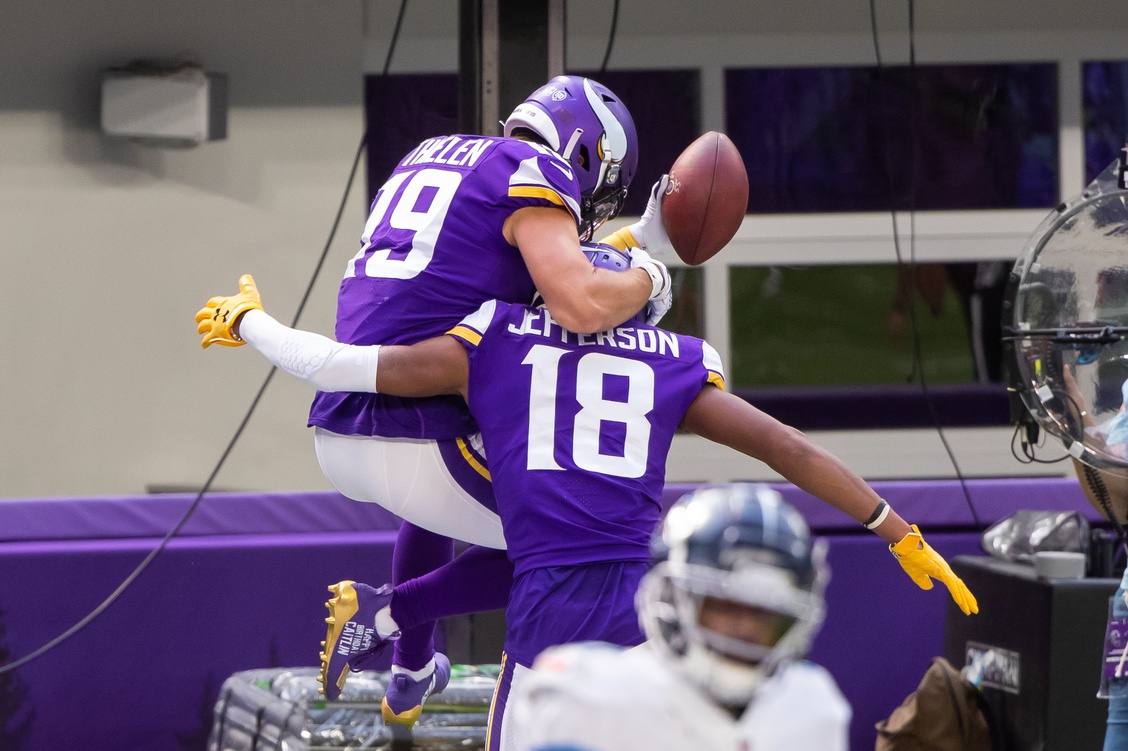 The Minnesota Vikings could surprise the majority of NFL fans by fielding a top-10 offense in 2022. It’s not as ridiculous as it sounds.

The Vikings finished 12th in total offense last season by compiling an average of 362.8 yards throughout 17 regular-season contests. They finished less than three yards behind the Green Bay Packers (365.6/game) for a top-10 finish (I bet not many of you would have guessed that). The Vikings managed to reach such heights despite being coached by a defensive-minded leader in Mike Zimmer. Zimmer’s outdated tendencies hampered an offense that was overseen by former Offensive Coordinator Klint Kubiak. Both Zimmer and Kubiak were relieved of their duties at the conclusion of the season. The new regime could help elevate Minnesota’s offense to a new standard that hangs its hat on spacing and the creation of more explosive plays than previous iterations provided.

New Vikings Head Coach Kevin O’Connell is expected to inject a breath of fresh air into a Minnesota offense that was toeing the line between statistically above average and stale prior to his appointment. The first-year coach represents a risk, no doubt, but O’Connell’s expected makeover should help, not hinder Minnesota.

A former NFL journeyman quarterback that originally entered the league as Tom Brady’s backup in New England, O’Connell spent last season as Sean McVay’s Super Bowl-winning offensive coordinator. O’Connell is expected to run a similar offense to what McVay operates in Los Angeles, which is all an extension of the infamous Shanahan coaching tree (in a roundabout way, at least). O’Connell helped McVay call an offense that often fields similar personnel groupings with different post-snap outcomes that confuse opposing defenses. Make everything look the same, but be different. The goal will be similar in Minnesota.

In addition to the Rams, several offenses have had success running a variation of this system in recent seasons, including the Green Bay Packers, Tennessee Titans, and San Francisco 49ers, all of which have finished as a top-10 NFL offense at least once since making the system change, by the way—more firepower for an argument that backs Minnesota’s chances. The New York Jets continue to usher in that same scheme under offensive coordinator Mike LaFleur, which flashed signs of promise last season. It’s a popular system that could lead to more success for the Vikings in 2022. O’Connell himself is a veteran of the system. Prior to linking up with McVay in L.A. last season, O’Connell previously worked for Jay Gruden in Washington, who ran a variation of that scheme.

Coaching isn’t everything. Talent matters, too. High-level offensive pieces are in place and also lean favorably for immediate success. Dalvin Cook is a devastating dual-threat running back that should thrive with more opportunities behind an athletic offensive line that is tailor-made to play in space. Justin Jefferson finished in second place (behind Cooper Kupp) while accounting for 1,616 receiving yards last season. Playing in a receiver-friendly system such as the one O’Connell is introducing should lead to a career-best campaign for Jefferson, who could threaten to lead the league in receiving yards in 2022. The aging Adam Thielen remains a threat to flirt with 800-plus receiving yards.

That brings us to the most important piece. Vikings General Manager Kwesi Adofo-Mensah has already signed quarterback Kirk Cousins to a contract extension through the 2023 season. It guarantees the continuation of the chemistry Cousins has developed in recent years with Jefferson, Cook, and Thielen. It’s worth noting O’Connell and Cousins possess a shared history. O’Connell served as Washington’s quarterbacks coach in 2017, which was Cousins’ final season in Washington. The aforementioned Gruden was Washington’s Head Coach. That experience should make Cousins’ transition into O’Connell’s system a seamless one.

O’Connell makes the Vikings one of the bigger unknowns as we swiftly head toward the 2022 campaign. The NFC North could experience a makeover. O’Connell’s coaching experience and preferred offensive system, when paired with the high-level talent at his disposal, could help create a top-10 offense in Minnesota.