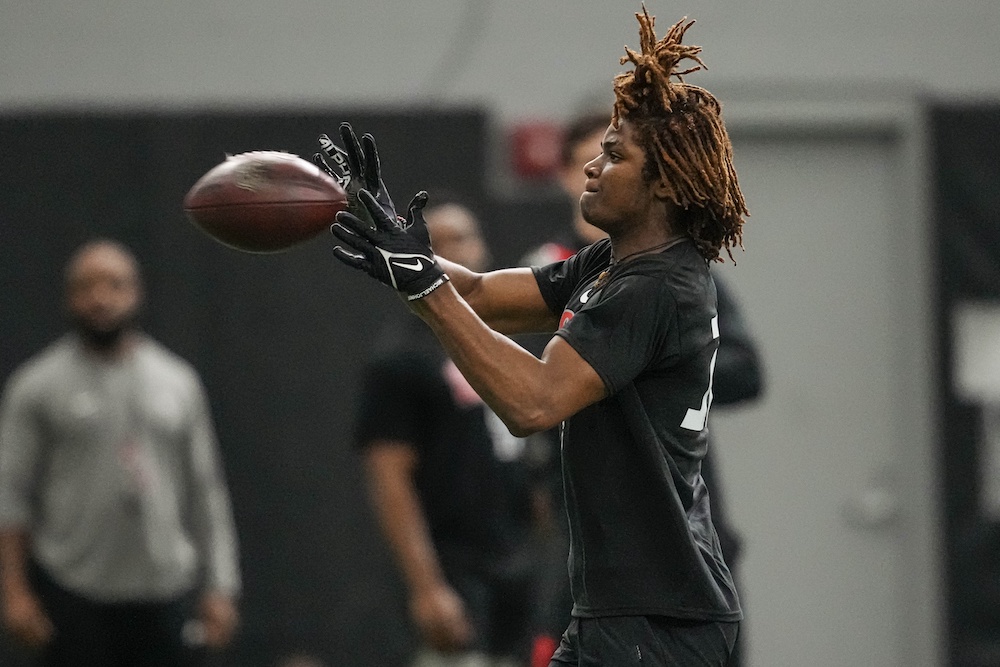 A new era has begun in Minnesota this year. After eight years under Head Coach Mike Zimmer that included three playoff appearances, the Vikings decided to embrace a full front office overhaul after back-to-back losing seasons. The team fired Zimmer and General Manager Rick Spielman after the conclusion of the 2021 season. To replace them, Minnesota brought in former Rams Offensive Coordinator Kevin O’Connell as their new head coach and hired Kwesi Adofo-Mensah, the Browns’ former vice president of football operations, to be their new general manager. That meant the 2022 NFL Draft presented the first opportunity for the new regime to make an impression on the fans and the rest of the league. First impressions can be very telling, and Adofo-Mensah made a good one in his first go-round. He gave Minnesota’s defense the tune-up it needed while also adding some quality depth to the offense around their recently extended quarterback, Kirk Cousins, in the later rounds. Let’s take a closer look at my Vikings 2022 draft grades.

Adofo-Mensah’s first move as a general manager in his first NFL Draft was trading down 20 spots from the 12th overall pick.

When Minnesota used the final pick of the first round to draft Lewis Cine, a safety, it was a bit of a head-scratcher. Not because Cine isn’t a fantastic defender in his own right but because the team essentially gave up the opportunity to draft Kyle Hamilton, a more highly touted safety, with their original pick. Not only that, but they gave up that chance with their original pick to allow a divisional rival to move up and take Jameson Williams, a very talented receiver. That isn’t great immediate value after trading down so far in the first round.

Still, Cine should be a great defender at the next level. He showed plenty of versatility during his time at Georgia, playing over a hundred snaps as a slot cornerback and dozens more as a linebacker. He’s an outstanding tackler and great run defender, but his ball skills and production could use further development. The Vikings may have lost safety Xavier Woods in free agency, but we’ll still have to see how much playing time Cine gets alongside fellow safeties Harrison Smith and Cam Bynum.

Another divisional trade down, this time with the Packers, for two second-round picks that eventually allowed the Vikings to move back up in a trade with the Colts. Green Bay moved up to finally draft a receiver for quarterback Aaron Rodgers and the Vikings got the capital to move up and fill their biggest need.

Getting cornerback Andrew Booth Jr. in the second round is a great value addition for Minnesota. Booth has elite ball skills that really show off the fact he used to be a receiver. Those skills and his ability to stick to receivers in man coverage should make opposing quarterbacks wary about targeting the Clemson product.

However, Booth fell out of the first round because of some pretty serious medical concerns. He tore his patellar tendon in 2020 and was unable to participate in pre-draft events because of a core muscle injury. The Vikings have to hope that he’ll be able to overcome those injuries and stay on the field for them.

Minnesota stood pat with the other pick they received from the Packers and used it to help out their offensive line. Interior offensive lineman Ed Ingram has the versatility to play either guard position and has a lot of upside as a run blocker. He’s an explosive, powerful blocker that is also effective as a pulling guard in power runs. Ingram is also good in pass protection thanks to his patience and lateral mobility.

Though the Vikings added guard Chris Reed and Jesse Davis—a tackle who will likely kick inside—in free agency, Ingram has a real chance to be an upgrade over both of them. Given his athleticism, versatility and talent as a blocker in both run and pass scenarios, Ingram will be fighting for (and could win) a starting job in training camp.

This is a really nice addition for the Vikings. Minnesota had one of the worst run defenses in the NFL last year. Even after bringing in linebacker Jordan Hicks during free agency, adding depth and talent at the position will only help that weak spot improve.

Asamoah has great speed and a super long wingspan that, combined with his physicality, make him an exceptional tackler. He’s also got the great lateral mobility and athleticism to excel in pass coverage in zone schemes, covering tight ends and even playing man-to-man over running backs out of the backfield.

Did I mention that cornerback is a big need for the Vikings? Cornerback Mackensie Alexander remains unsigned, and Patrick Peterson, though re-signed, is entering his age-32 season and missed time due to injuries for the first time last season. Both Peterson and fellow corner Chandon Sullivan will also be in the final year of their contracts in 2022.

In Evans, the Vikings get a developmental cornerback with great length, a strong tackling ability and high potential. He gives Minnesota some additional depth at a needy position after drafting Booth a couple of rounds earlier, and he could be a real contributor by the end of this season.

After adding edge rusher Za’Darius Smith in free agency a month earlier, Esezi Otomewo provides some nice additional depth for the Vikings at his position. He’s still a pretty raw player, but his length and the power he generates with his hands suggest there’s plenty of potential. He’s already a good run defender but his pass-rushing skills could use a little extra development.

Another upside of Otomewo’s game is the versatility he showed off in certain spots at Minnesota. He played in several spots along the line of scrimmage with the Gophers and could play in those different alignments and help shore up the Vikings’ interior defensive line.

This was a sneaky good pick. Running back Ty Chandler won’t be in a competition to steal Dalvin Cook’s job this year but could be an important piece as Wayne Gallman is still unsigned and Alexander Mattison is entering a contract year.

Chandler has good vision and great footwork that make him a hard man to wrap up and tackle. He also has a ton of upside as a third-down back because of his strong pass-protection ability and his potential as a pass-catcher split out in the slot or even out wide. Chandler will likely be able to contribute as early as this year as a committee/third-down back.

Adding an offensive tackle in the sixth round feels more like a depth addition than anything else, especially considering where Minnesota’s roster currently stands at the position. They drafted Christian Darrisaw in the first round just last year and signed Brian O’Neill to a five-year contract extension last September. The former missed some time with a groin injury but played well and the latter earned a Pro Bowl nod.

Still, Lowe was an experienced (52 starts for the Illini) starting tackle for Illinois and improved considerably in his final year with the team. If he can keep developing at the pro level under new Vikings offensive line coach Chris Kuper, Lowe might eventually be able to contend with Darrisaw for starting snaps at left tackle. If not, he’s still a valuable depth piece for Minnesota’s offensive line.

Here’s another sneaky good addition to the Vikings’ offense. Wide receiver isn’t an apparent need with current receivers Justin Jefferson and Adam Thielen packing one of the NFL’s best one-two punches. That said, there wasn’t a lot of receiving production behind those two and K.J. Osborn and Thielen will be 32 by the start of the regular season.

Nailor is a big-play monster, leaving the Spartans after four years of averaging just under 17 yards per catch during his college career. He’s a true vertical threat with his nines, posts and double moves and can create yards after the catch with his vision once he’s downfield with the ball in his hands. Nabbing a deep-threat receiver that could also develop further as a route-runner and separation-creator in the sixth round is excellent value for a team that could use receiving depth.

The Vikings needed to add a tight end at some point this offseason to replace the big loss of Tyler Conklin in free agency. They just decided to wait until the final round of the draft to do so. Even if they didn’t want to draft a tight end on Day 1 or 2, the Vikings had the opportunity to draft a more talented one earlier on Day 3. Charlie Kolar, Jake Ferguson, Isaiah Likely and Chig Okonkwo were all available in the fourth round. Passing on addressing that need earlier in the draft seems to suggest Minnesota has faith that tight end Irv Smith Jr. will be able to return from a torn meniscus and be productive.

Nick Muse is a solid YAC (yards after catch) guy who thrives on short passes over the middle, while using his physicality and vision to generate extra yardage once the ball is in his hands. He doesn’t have a ton of upside as an in-line blocker, but his pass-catching potential is there.

All in all, I thought the Vikings did a good job addressing their needs in this draft, adding skilled players in positions of need and creating depth at less needy spots.

Getting (in Joe Marino’s words) fleeced by the divisional-rival Lions for their first-round pick knocks them down a few points in this grading scale. I’m not sure why they agreed to move down so far only to miss out on drafting the top athlete in the class and settle for another safety. They saved face by drafting Booth in the second round then going on to have an otherwise solid draft.

The choice to double dip at cornerback in the fourth round and waiting until the seventh to address a big need at tight end was also a bit confusing to me. Conklin is a bigger loss than some may realize and Smith is returning from a pretty serious injury. If the latter is unable to be as productive post-injury and Muse isn’t a contributor, that decision will be further scrutinized.