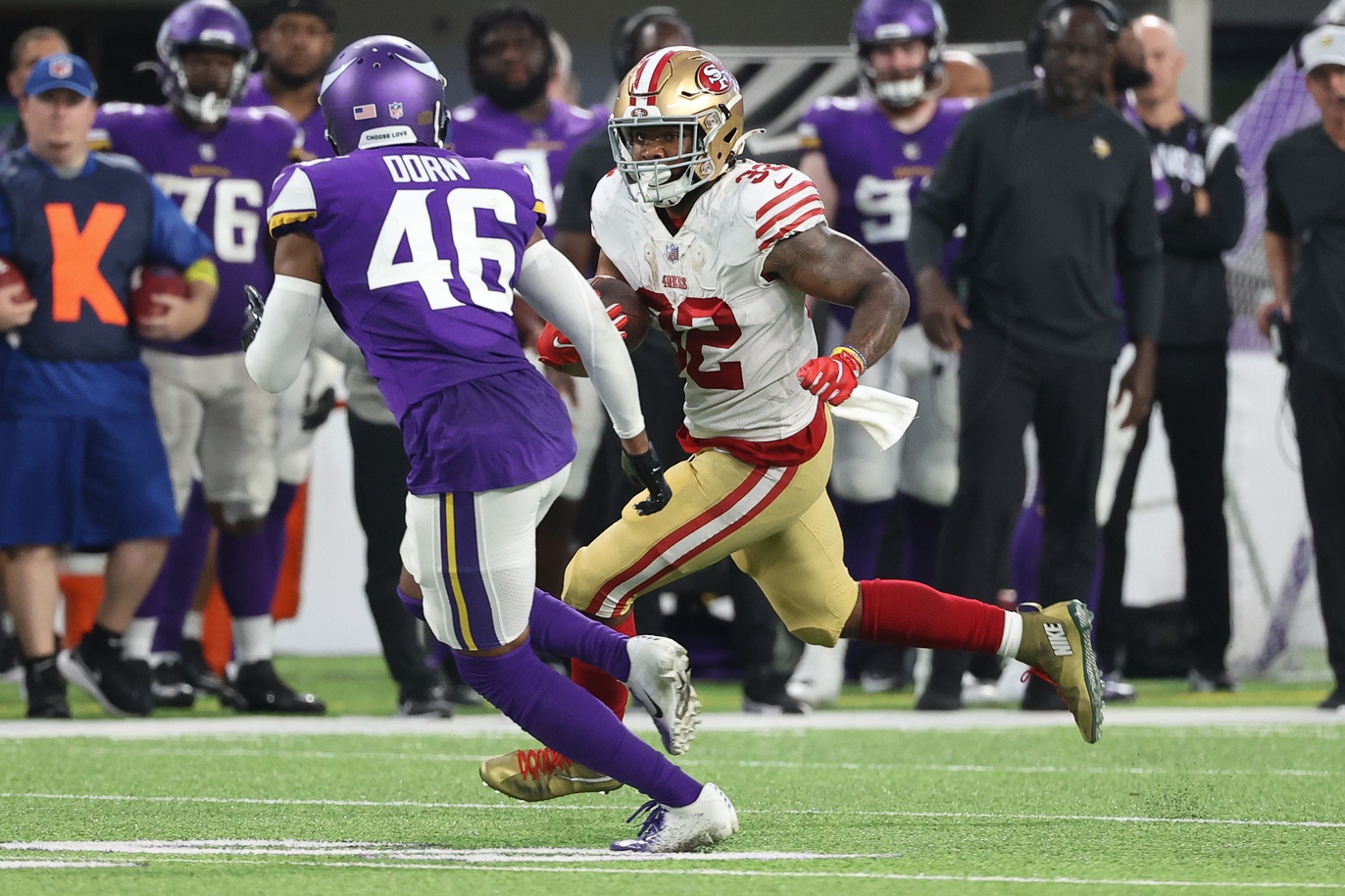 San Francisco 49ers rookie running back Tyrion Davis-Price may be headed for a bigger role in the coming weeks. Fellow 49ers ball carrier Elijah Mitchell is expected to miss 6-8 weeks with a knee injury, according to multiple reports. Mitchell may not return until the postseason, should the 49ers qualify. Davis-Price is positioned to inherit Mitchell’s workload.

Although Mitchell is more of a proven commodity than Davis-Price is, head coach Kyle Shanahan is keeping McCaffrey healthy and fresh by rotating his backfield. McCaffrey’s heavy involvement in the passing game paired with his lengthy injury history suggests it’s an appropriate strategy. Davis-Price will be involved.

The No. 93 overall selection in the 2022 NFL Draft, Davis-Price last featured for the 49ers in a mid-October defeat to the Kansas City Chiefs. Davis-Price has rushed for 37 yards on 16 carries this season. Davis-Price suffered a high-ankle sprain earlier in the campaign but has since recovered in full.

Davis-Price’s 2.3 yards per carry leaves some to be desired, but the sample size is too small to make any rash judgments regarding his abilities. The advanced analytics project Davis-Price in a more positive light. The former LSU standout has created opportunities for himself by averaging 2.31 yards after contact per attempt, via Pro Football Focus. Davis-Price has forced three missed tackles despite limited touches. He’s accounted for one explosive run (10-plus yards), a 20-yard gain against the Seattle Seahawks in Week 2.

Davis-Price is now arguably in the best position of his rookie campaign. San Francisco’s backfield has been cluttered throughout the season. Mitchell opened the year as the starter. Jeff Wilson Jr. was also in the mix as a No. 2 back, but Wilson was traded to the Miami Dolphins at the NFL trade deadline.

Davis-Price will now have to outperform undrafted free-agent rookie running back Jordan Mason. Mason operated as the No. 2 back following Mitchell’s injury on Sunday, but it’s worth acknowledging Davis-Price was inactive. San Francisco’s needs have since changed. There’s an undrafted free agent standing in the way between Davis-Price and backup duties.

The 49ers haven’t handed Davis-Price anything throughout his rookie campaign. They’ve rostered a ton of veteran backs through 12 weeks, including Marlon Mack and Tevin Coleman. Coleman remains on their practice squad, but Mack has been released.

Davis-Price is no stranger to sharing a backfield. In 2020, Davis-Price was involved in LSU’s timeshare alongside John Emery Jr. Tyrion Davis-Price led the Tigers in rushing yards (446), but he out-carried Emery by a small margin (104-75). In 2021, he also proved his ability to carry a heavier workload when necessary by enjoying a 1,000-yard campaign.

49ers general manager John Lynch invested a premium top-100 selection in Davis-Price. Mitchell’s setback opens a window of opportunity for the rookie ball carrier to make an impact. The 49ers should allow him to do just that.