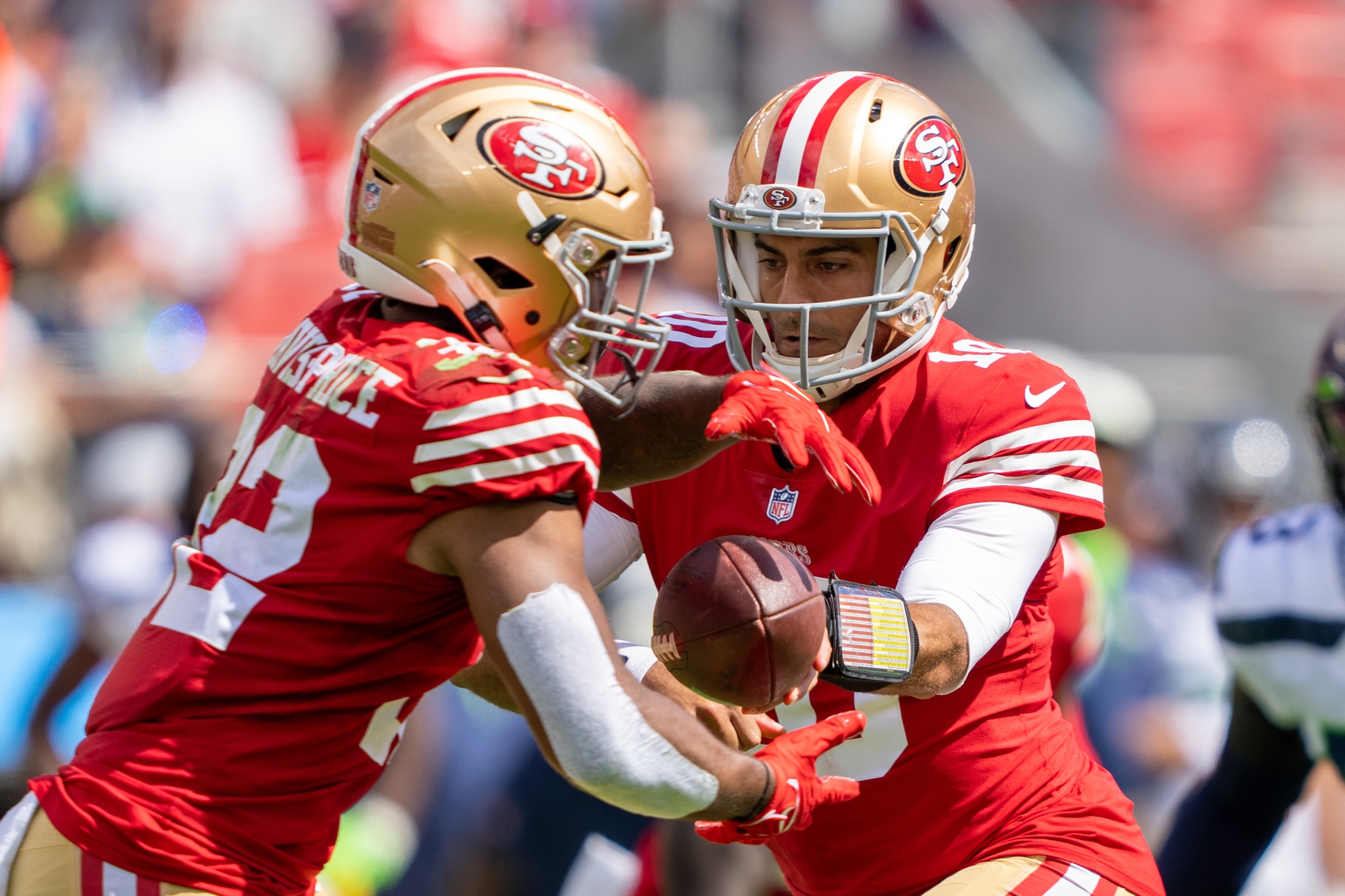 Can Tyrion Davis-Price Make Impact For 49ers Upon His Return?

An intriguing reinforcement may soon be marking his return to the San Francisco 49ers’ lineup. Rookie running back Tyrion Davis-Price is practicing in full, according to multiple reports. Davis-Price appears poised to return from an ankle injury in Sunday’s Week 6 showdown against the Atlanta Falcons. Davis-Price is capable of making an immediate impact in San Francisco’s ever-changing backfield if afforded an opportunity but carries may initially be difficult to come by.

Davis-Price last featured for the 49ers in their dominant 27-7 Week 2 victory over the Seattle Seahawks. The No. 93 overall selection in the 2022 NFL Draft, Davis-Price carried the ball on 14 occasions for a total of 33 yards (2.4 yards per carry). Davis-Price suffered a high-ankle sprain in that contest and has been sidelined ever since. The former LSU product forced two missed tackles and averaged 2.07 yards after contact per attempt, via Pro Football Focus. It’s worth acknowledging that Davis-Price nearly saw an even workload against the Seahawks, being out-carried just 18-14 by presumed starter Jeff Wilson Jr.

The snap count was nearly even with Wilson Jr. out-snapping Davis-Price 26-19 in that game. 49ers head coach Kyle Shanahan clearly holds an appreciation for Davis-Price’s skill set and initially planned to utilize him alongside Wilson Jr. as a one-two punch following the injury to Elijah Mitchell. It will be worth monitoring Davis-Price’s usage this weekend to see if that remains the case.

The presence of Tevin Coleman throws another wrench into this unpredictable backfield. Coleman signed to the 49ers’ practice squad in late September following Mitchell’s injury. Coleman was elevated to the game-day squad in Sunday’s 37-15 win over the Carolina Panthers. Coleman scored two touchdowns within 10 yards. Coleman opened the scoring by securing a nine-yard touchdown pass from Jimmy Garoppolo in the first quarter. Coleman later poached a five-yard touchdown run late in the fourth quarter.

Coleman gained just 23 yards on eight carries (2.9 yards per carry), but he also secured all three of his targets for 44 yards and clearly has a dual-threat role on this 49ers offense. Coleman was involved in 27% of San Francisco’s offensive snaps against the Panthers, as opposed to 55.6% for Wilson. Coleman will remain involved.

Coleman has since been signed to the 49ers’ active 53-man roster, the team confirmed on Wednesday. Fellow veteran ball-carrier Marlon Mack was released earlier this week. Coleman played for Shanahan and the 49ers during the 2019 and 2020 campaigns. Coleman also played two seasons (2015-16) under Shanahan’s tutelage in Atlanta with the Falcons. A revenge game may be on tap for Coleman against the Falcons this weekend. No coach knows Coleman better than Shanahan does. Davis-Price will not only be contending against Wilson Jr. for snaps but Coleman as well.

The ever-dynamic Deebo Samuel further complicates matters. Shanahan has made an effort to reduce Samuel’s usage in the backfield, but he’s still totaled 37 snaps in that alignment this season. Samuel saw season-lows in backfield snaps (1) and carries (2) against the Panthers. Running back Jordan Mason is also on the roster.

Davis-Price remains an important offensive piece for the 49ers moving forward. His status as a top-100 selection essentially secures his future role. But Davis-Price may have a difficult time dethroning Wilson Jr. and Coleman given their current production.