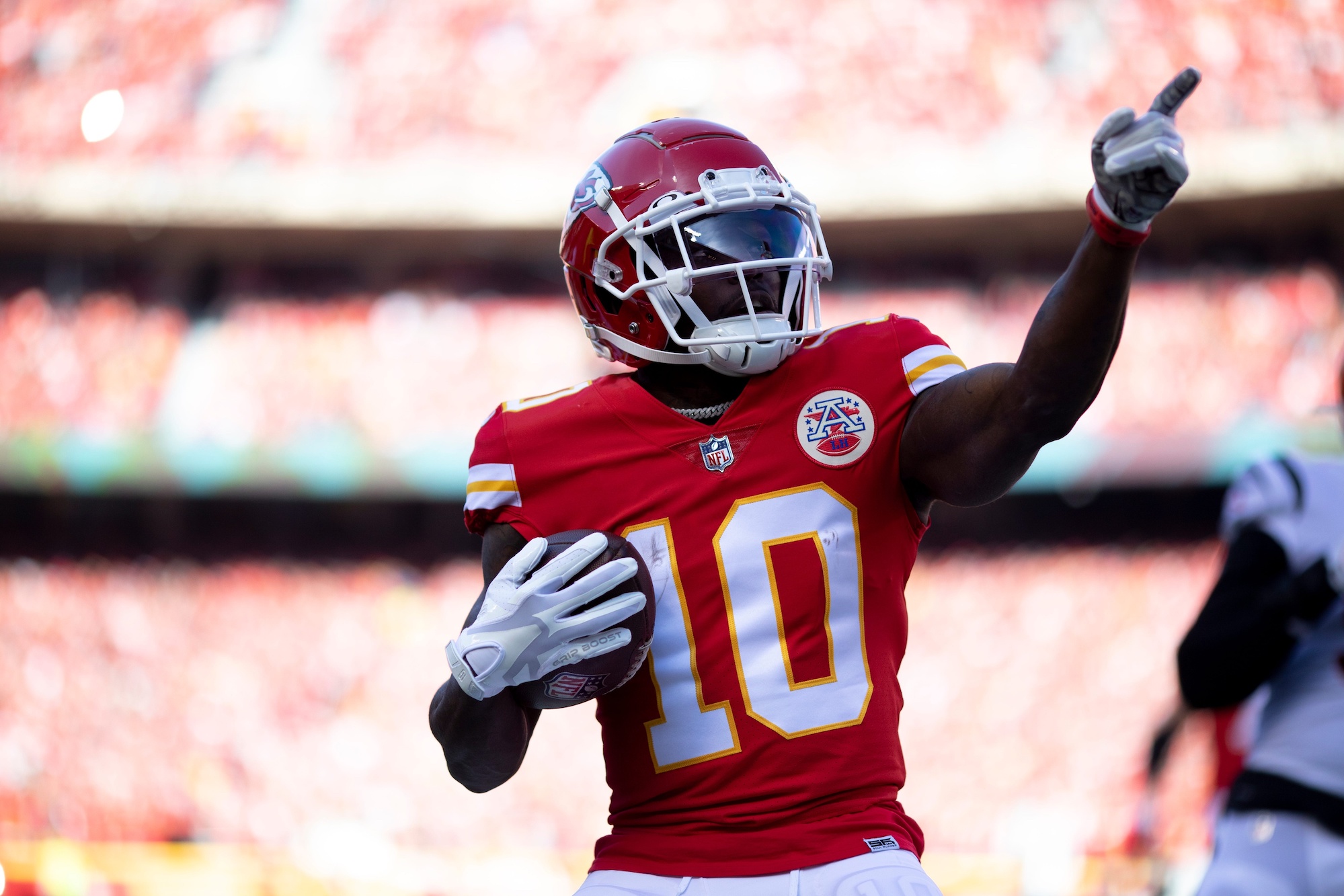 Did Tyreek Hill Really Not Get The Ball Enough?

Miami Dolphins wide receiver Tyreek Hill recently launched his own podcast titled “It Needed to be Said.” In its debut episode, promptly named, “The Trade,” Hill and his agent Drew Rosenhaus discussed the shocking offseason trade that sent Hill from the Kansas City Chiefs to the Dolphins. Hill then signed a four-year, $120 million extension in Miami, including $72.2 million guaranteed, making him the highest-paid wide receiver in the NFL.

While many assumed the Chiefs couldn’t afford to match or surpass the sort of offer Hill was looking for financially given their salary cap difficulties, ultimately leading to his departure, Hill took to his podcast to claim a lack of targets was behind his frustration with the Chiefs organization.

It’s ridiculous for Hill to claim he didn’t get the ball enough in Kansas City, but his comments suggest he feels otherwise.

“If teams are gonna give us favorable one-on-one matches against their best corner, I don’t see why teams don’t utilize their best receiver,” Hill said. “And that’s where probably like me and the Chiefs fell apart right there. Just give me the ball, please,” Hill concluded.

It’s a statement that comes off as rather misguided and diva-like. Hill finished the 2021 regular season with a career-high (!) 159 targets under his belt, or nearly 10 targets per contest. It represents the seventh most targets in the NFL during the 2021 campaign. Additionally, in three postseason contests, Hill averaged 9.33 targets per game.

The Chiefs consistently involved Hill in their high-octane offense and did so throughout his entire tenure in Kansas City. Hill’s target share actually slightly increased from 2020 to 2021 (an even nine targets per game in 2020 versus 9.35 targets per contest in 2021) so it’s difficult to imagine a fair reason why Hill would all of a sudden have an issue with his involvement in the offense. It’s worth noting Hill’s yards per reception (11.2) dropped to its lowest since 2016, and he had fewer receiving yards and fewer touchdowns in 2021 than he did in 2020 despite seeing a career-high in targets.

Hill’s statistical regression could be chalked up to a number of different things. Defenses certainly paid special attention to limiting Hill’s big-play opportunities. When analyzing the film, several opposing defenses utilized their safeties in double-team situations that would sniff out Hill’s deep-route attempts before switching attention to their zone assignments. This defensive strategy essentially dared the Chiefs to nickel-and-dime their way down the field, which is wiser than affording Hill easy opportunities to get behind their secondary. Hill will surely garner a similar amount of attention in Miami.

There’s also one funny coincidence to take into consideration. While many would be quick to mention Travis Kelce as a reason why Hill didn’t receive more targets in Kansas City, it’s worth noting Dolphins receiver Jaylen Waddle actually saw more targets this past season (140) than Kelce (134) did. The difference of six targets is minimal, but Hill will now be sharing the ball with a fellow receiver in Waddle that received more attention from his quarterback than Kelce did, in an offense that has historically thrown the ball with less volume than the Chiefs have, and with a worse quarterback at the helm. It’s also plausible to believe that Waddle will see an increase in usage in his sophomore season after exploding as a rookie in 2021.

New Dolphins Head Coach Mike McDaniel developed a run-first mentality while working alongside Kyle Shanahan in San Francisco, and although he’s expected to pepper the likes of Hill and Waddle with targets, it’s fair to believe Hill could actually see fewer targets in 2022 than he did in 2021. Wouldn’t that be something?

Hill’s complaints about a lack of usage add extra intrigue to how he fares in his first season with the Dolphins. McDaniel and offensive coordinator Frank Smith will surely make a valiant effort to get Hill the ball, especially when considering what they paid to acquire his services. If Hill was truly disappointed with a lack of usage and production in Kansas City though, the six-time Pro Bowler could be in for a rude awakening.