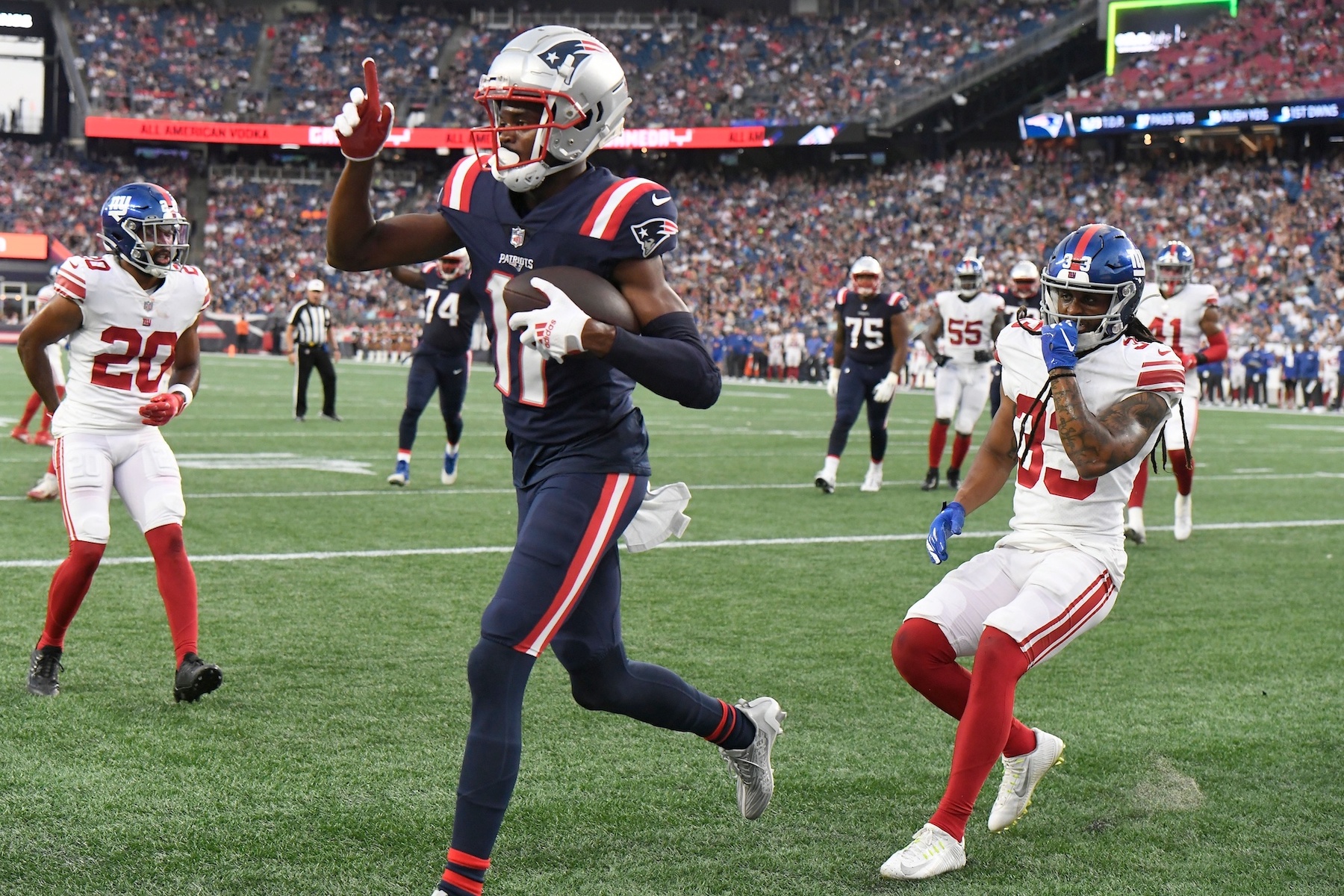 New England Patriots rookie wide receiver Tyquan Thornton made his NFL regular season debut in Sunday’s dominant 29-0 victory over the Detroit Lions. Thornton recorded two receptions for seven yards. There’s more than meets the eye in Thornton’s box score statistics, however. Thornton is a prime candidate to enjoy a breakout game against a Cleveland Browns secondary that will be without No. 1 cornerback Denzel Ward this coming Sunday.

Thornton was surprisingly involved upon his return from a broken collarbone injury that cost him the first four games of the regular season. Thornton was on the field for 25 of New England’s 60 offensive snaps (41.6%). Jakobi Meyers (48), Kendrick Bourne (34), and DeVante Parker (31) were the lone Patriots receivers to out-snap Thornton. Thornton was within nine snaps of being New England’s second-most utilized receiver.

The Patriots’ offensive coaching staff flashed a willingness to get creative with Thornton’s usage and alignments. Thornton lined up at multiple positions and used suddenness to create consistent separation against the Lions’ aggressive secondary. It’s just a matter of time before Thornton makes a larger impact on the stat sheet.

The presence of rookie quarterback Bailey Zappe limited Thornton’s upside. The Patriots kept things rather vanilla from a play-calling perspective and didn’t encourage Zappe to attempt deep shots or test tight throwing windows. The Patriots also controlled the game from the get-go and went into a conservative shell while protecting a multi-score lead in the second half. Thornton’s potential should be fully unlocked once Mac Jones returns under center.

Jones has been a limited participant throughout this week of practice leading up to Sunday’s showdown with the Browns. Patriots head coach Bill Belichick recently claimed that Jones can be medically cleared shortly. Jones’ true status for Sunday hangs in the balance, but his impending return will be a welcome sight for Thornton.

New England’s offense has been surprisingly more explosive than they’re receiving credit for. They’ve created 19 receptions of 20-plus yards this season, per Pro Football Focus. Only four teams (Detroit, Green Bay, Buffalo, and Denver) have surpassed that total. The Patriots are tied for sixth in the NFL with 37 total explosive plays (20-plus-yard receptions and 10-yard rushes). Thornton will make the Patriots considerably more explosive as they aim to continue climbing up these ranks.

The No. 50 overall selection in the 2022 NFL Draft, the Patriots drafted Thornton with a premium pick in order to secure more team speed on offense. Thornton is a perimeter burner that dropped jaws at the NFL Scouting Combine after running a blazing 4.28 in the 40-yard dash. Thornton is the type of mismatch creator that generates spacing issues for opposing defenses. It’s all the rage in today’s pass-happy NFL.

The Patriots will continue getting Thornton involved via all three areas of the field. Bringing him in pre-snap motion will stress opposing defenses. The Patriots could design jet sweeps and bubble screens for Thornton near the line of scrimmage. The former Baylor standout can thrive via the intermediate area on quick hitters and crossers. His ability to take the top off the defense is obvious and has been well-documented. There’s little Thornton can’t do for this Patriots offense.

Sunday’s showing against the Lions provided a sneak peek into Thornton’s game-breaking capabilities. Thornton will be making highlight-reel plays sooner rather than later. They may occur against the Browns in Week 6.