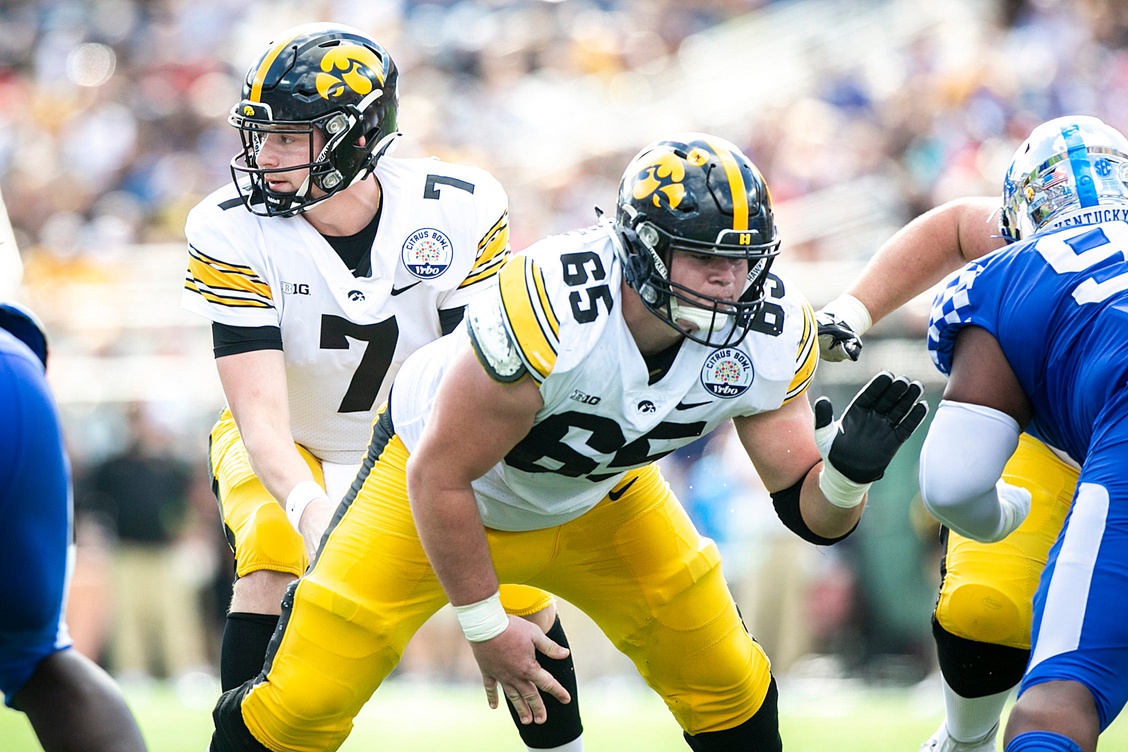 It goes without saying the importance of the big uglies up front. The hog mollies, the maulers on the interior – the backbone of an offense. While the flash and flare of the quarterback, running back and wide receiver spots often garner the majority of the spotlight, the need for teams to build from the inside out is often the method for many of football’s most successful franchises. A gifted athlete who could very well play the tight end spot in dire straits, Iowa’s Tyler Linderbaum is a one of one talent on the inside. A smooth mover with the nastiness to finish and displace defenders in the run, only to anchor and drive pass rushers to the dirt in his pass sets, teams in need of fresh legs up front should look no further.

Linderbaum is one of the cleanest prospects in the class whose skillset should translate seamlessly into any offense he’s in. Here are a few teams that should be pounding the table for the All-American in just a few weeks time.

A prospect once looked upon as a bona fide, early Day 1 pick, following multiple waves of free agency, positional needs of teams in round one have inherently changed, leaving Linderbaum on the outside looking in, if you will. While he and Texas A&M’s Kenyon Green headline a rather average interior line group as a whole, slotting in Linderbaum anchoring a unit touting Alijah Vera-Tucker, Laken Tomlinson, a healthy Mekhi Becton and potential early day one offensive tackle is a heck of a group to protect quarterback Zach Wilson. The early picks of the second round look to be his strikezone, and if I’m General Manager Joe Douglas at No. 35 or No. 38 overall, I’m pulling the trigger.

I would like to plug Linderbaum in right away at center, but with center Tyler Biadasz in place, sliding the former Hawkeye to guard opposite Zack Martin could be a match made in heaven. A line once able to overpower whatever defensive front it faced, following the retirement of Travis Frederick and departure of La’el Collins, Dallas is in need of a facelift up front. Considering the dropoff in production from running back Ezekiel Elliott the last few seasons, adding a true man mover whether he aligns at guard or center should provide increased running lanes and extra time to scan downfield for quarterback Dak Prescott.

It’s a new era of Raiders football and with Derek Carr locked up for the foreseeable future and wide receiver Davante Adams now in town to serve as Carr’s top target, adding a talent like Linderbaum to captain the front five would be one of the sneakiest, most impactful additions in the entire draft. There’s no question about how successful Las Vegas’ offense can be this fall with its arsenal of weaponry and adding a plug and play option like Linderbaum could represent a chef’s kiss for an offense with an unlimited performance ceiling.

Whoever ends up playing quarterback for the Steelers this fall should hope General Manager Kevin Colbert – in his last draft as GM – adds fresh legs up front. It’s no disrespect to the current guys in town, but if you plan to move forward with quarterback Mitch Trubisky as your starter, placing him behind one of the worst offensive lines on paper isn’t the greatest way to get him comfortable. A culture changer in the trenches, anointing Linderbaum as the nucleus of the front five would go a long way towards the progression of running back Najee Harris as well.