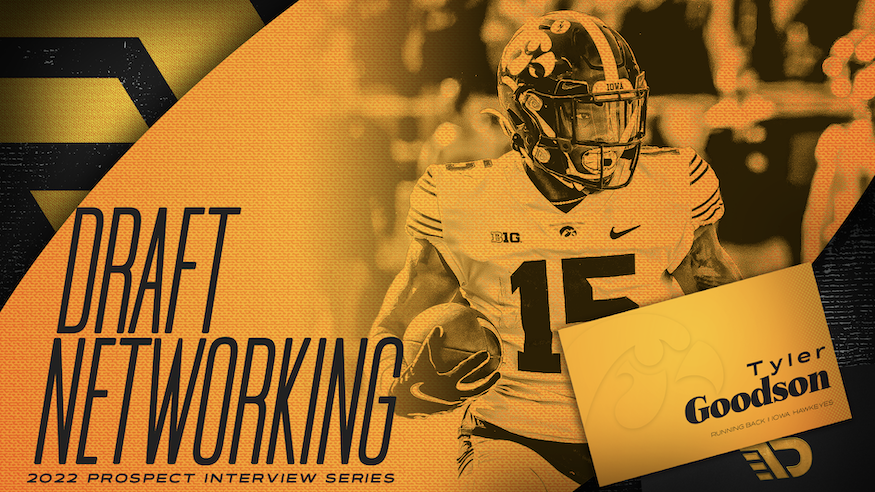 Iowa’s Tyler Goodson is one of the most exciting and intriguing running backs in the 2022 NFL Draft. Goodson put an appropriate bow on a terrific three-year collegiate career in 2021 by recording career highs in rushing yards (1,151) and receiving yards (247). Goodson now departs the Hawkeyes program as a battle-test ball-carrier that accounted for an astounding 3,116 total yards of offense and 19 touchdowns from scrimmage.

Goodson recently spoke exclusively with The Draft Network about making immediate contributions as a true freshman, his career-best campaign in 2021, why playing in Iowa’s offense helped prepare him for the next level, setting the program’s all-time fastest 40-yard dash time at the NFL Scouting Combine, and so much more.

JM: You hold the true freshman rushing record at Iowa, rushing for 638 yards in 2019. What is it about your game that allowed you to contribute immediately from such a young age?

TG: I would credit my ability to be versatile. I knew I could go in there and run the ball from a young age while picking up the tough yards in-between the tackles. I knew I could run routes and catch the ball. I was able to create some mismatches against linebackers during my true freshman season. I did some great things one-v-one in space. That’s where most of my early success came from. It was a perfect start to my career at Iowa.

JM: You took another big step forward in 2021 by recording career highs in rushing yards (1,151) and receiving yards (247). What changed for you this past season?

TG: I would point to the hiring of another coach that played the game of football. Coach Ladell Betts did an excellent job of coming in and simplifying things to the best of his abilities. The entire running back room thrived under his guidance.

I don’t mean to take anything away from the previous running backs coach, who I worked with for two seasons. He was a great coach as well but coach Betts played the game and he understands it at the highest level. He definitely helped me progress my knowledge of the game as I became a true student of football under his wing. He made the game slow down for me. I went into the season a little bit smarter. I worked hard on my craft during the offseason. All of those things came into play and led to a successful season.

JM: Iowa is a program that is well known for running a pro-style offense. It traditionally has strong offensive linemen and an efficient rushing attack. What did playing in their offense and for that program do to help prepare you for the next level?

TG: It made me an improved runner between the tackles. We had to know our fronts and where the spaces were. We had to understand the assignments of our blockers. It allows me to become a more patient runner. Playing in a pro-style offense like Iowa forces you to be a smart, patient runner. You have to be able to make guys miss in the open field. As I prepare to enter the league, I know that running backs have to fit through tight holes just like I did here at Iowa. I’ll probably have to make a couple of guys miss at the second level in order to maximize my success at the running back position.

JM: You posted career highs in the passing game as I said earlier. That’s such a big part of today’s NFL offenses. Tell me about your skills as a pass-catcher coming out of the backfield.

TG: I’m extremely comfortable coming out of the backfield and playing in the passing game. As a running back, I pride myself on being able to do everything at the position. That sentiment extends well beyond my capabilities to run the ball. I’m an athlete that can go out there and run routes while smoothly catching the football.

You said it. Today’s offenses value the passing game above all else. NFL teams like running backs that can run routes. I can match up with a linebacker and create space for our receivers. I have that knowledge and skill set as I prepare to enter the league. I understand that the long-lasting value of a running back can sometimes be directly tied to his abilities in the passing game. That’s very important for me.

JM: You’re a smart guy. You went to the NFL Scouting Combine and put up some great results. You ran a 4.42 in the 40 and leaped a 36.5-inch vertical and 123-inch broad jump. Your 40 time was the fastest of any Iowa running back in combine history. Do you feel you surprised some people in Indianapolis with your performance?

TG: I most definitely surprised some people. Going into the combine and really this entire NFL draft process in general, I knew I was going to be one of those running backs that gets overlooked. I’m being slept on right now. From the time I started training for the combine, I knew I had the best possible team around me. Everybody over at my agency SportsTrust has been incredibly supportive of me throughout this process. They put me in the right position to get ready for the combine. From there, it was all about believing in myself and trusting in my abilities. I put my trust in God and I knew I would put great numbers up.

JM: You did just that. What was your main takeaway from the combine?

TG: It was a professional atmosphere all-around. I appreciated and embraced that. Everybody is watching your every move from the moment you arrive right up until the second you leave. I’m talking about coaches, general managers, everybody. I carried myself like a professional. I went onto the field and attacked the drills to the best of my abilities. I was ready to put my best foot forward. I had a bunch of meetings with coaches and conducted myself appropriately. I enjoyed those interactions. I was a professional.

JM: I’m sure you’ve heard the term “undersized” your entire life. You’ve proven people wrong. How do you typically respond?

TG: I’ve been hearing it my entire life as you said. It really doesn’t matter to me anymore. When I first started hearing it, it was more of a motivating factor for me above anything else. It made me go out there and play even better as I prepared to show everyone that I can hang with the best of the best.

I’ve always played comfortably and successfully at my current size. As I kept progressing, I eventually realized that what people say about you really doesn’t matter. As long as the people in my corner support me, that’s really all that matters. They believe in me and I believe in myself as well. I have a ton of confidence. I’ll be just fine on the field going forward. My career is going to blossom.

JM: That’s the best way to handle that question. I’ve really appreciated your time today. In closing, what kind of impact is Tyler Goodson going to make at the next level?