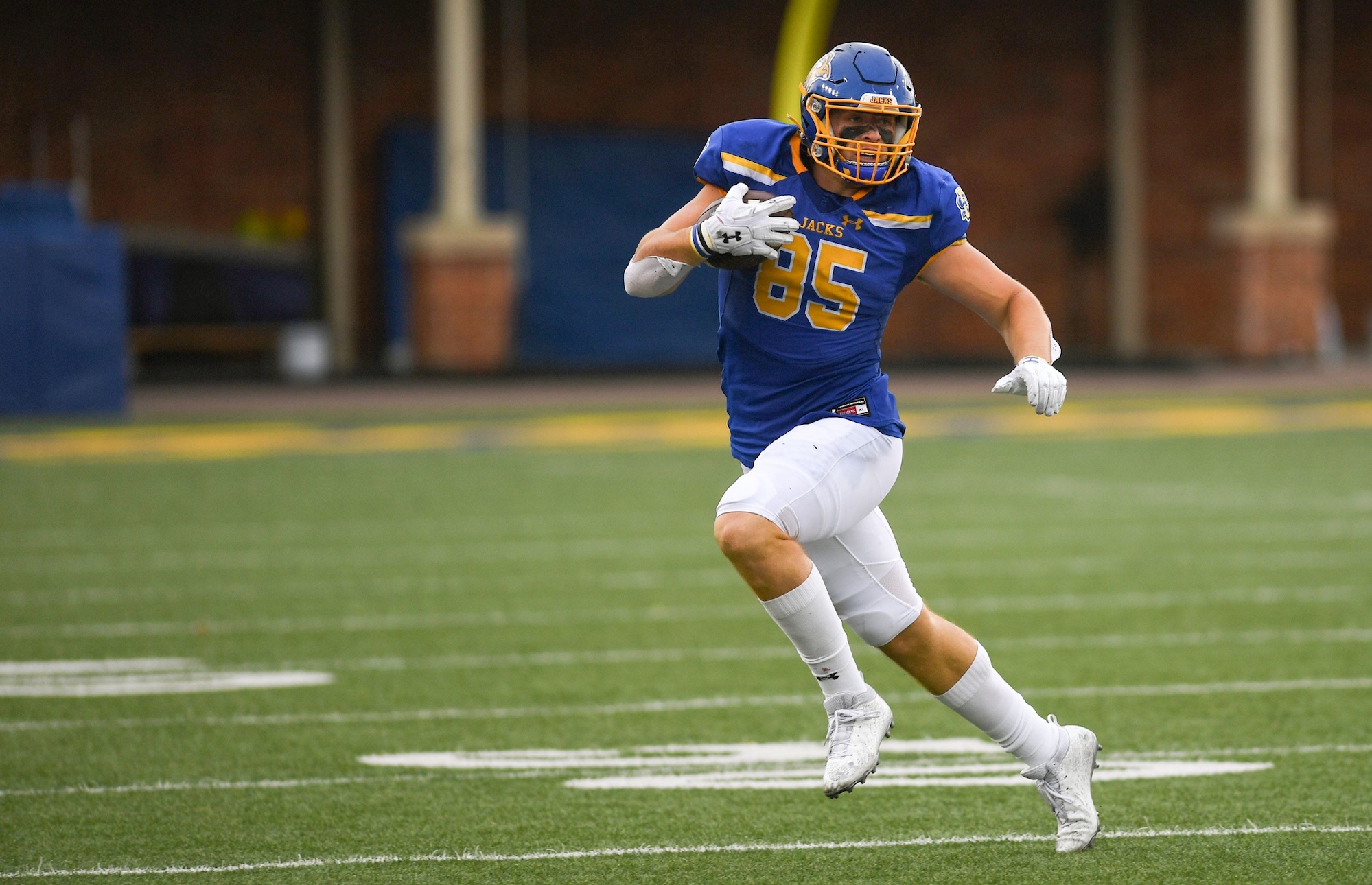 When you think about the plains of South Dakota, it doesn’t often coincide with premier gridiron talent and future NFLers. However, as the talent discrepancy across the nation continues to shrink, three talents that call the vast tundra of the Dakotas home will draw a swarm of NFL scouts this fall. A program known as the “little brother” to the powerhouse program of North Dakota State, the Jackrabbits of South Dakota State aren’t unfamiliar with producing pro talent. While recent names in Dallas Goedert and Pierre Strong Jr. have represented the poster-children of the program as mid-round selections in their respective drafts, talent in the form of electric tight end Tucker Kraft and twin wideouts Jaxon Janke and Jadon Janke are names to become familiar with as we move into the 2022 college football campaign.

A unique athlete, Kraft is able to win a multitude of ways and was utilized as such within the Jackrabbits offense—eerily similar to that of Goedert during his collegiate tenure. A flex weapon and big body that isn’t afraid of sticking his face in the mud in the run game, what makes Kraft such an intriguing talent as a pro—especially with his athletic profile—is the number of ways he can provide an impact in a day in age where tight ends are the ultimate chess pieces for an NFL offense.

A vertically imposing threat where eyes are drawn to him solely for his mold and makeup, Kraft’s burst at 6-foot-5 and 255 pounds presents him the ability to glide past secondary defenders with ease—forget putting a linebacker on him. While teams have looked to double and bracket him throughout his time in the college ranks, to avoid the onslaught of bodies, his alignment versatility has consistently presented the Jackrabbits’ offense with advantageous matchups and created headaches for opposing coordinators.

Two of Kraft’s teammates could be sleepers in the upcoming class. The Janke twins are two talents that will keep scouts busy while studying Kraft. Jaxon, like Kraft, was named to the 2023 Senior Bowl Watch List and touts an impressive array of traits that could translate well to the pro game. At 6-foot-3, 210 pounds, he looks the part.

A silky smooth route-runner who focuses on the acute details of the wideout position, his sure hands and long strides make it tough for corners to match his stems. One of the top pass-catchers at the FCS level, Jaxon Janke recorded 72 catches for 1,176 yards and five TDs that earned him a nod as a second-team All-Conference honoree. In a campaign that saw him record six straight 100-yard games in the latter half of the season, he totaled 119 yards and two scores in the quarterfinals at Villanova and 97 yards in the FCS semifinal at Montana State to wrap up his junior season.

Jadon, a smooth pass-catcher and special teams ace just like his brother, is the lesser known of the Janke tandem despite leading the Jackrabbits in touchdowns last fall (9).

“They’re the whole package,” wide receivers coach Josh Davis said. “They’re on another level right now. Size, speed, toughness, quickness, ball skills—and I don’t give one of them the edge over the other. Jaxon might be a hair bigger and a hair faster but they both have what it takes to go to the next level.”

Although the prestige of the Power Five draws the brunt of the nation’s attention, the talent out of South Dakota State this fall makes the motto of ‘scout the player, not the helmet’ a statement to live by more than ever before. Each corner of the country is littered with pro potential, it’s just about drawing the necessary eyes toward the deserved talent. The three aforementioned prospects, all unique in their own way, have the potential for success on Sundays down the road and could further provide fuel to the fire for small-school studs waiting for their share of the national spotlight.