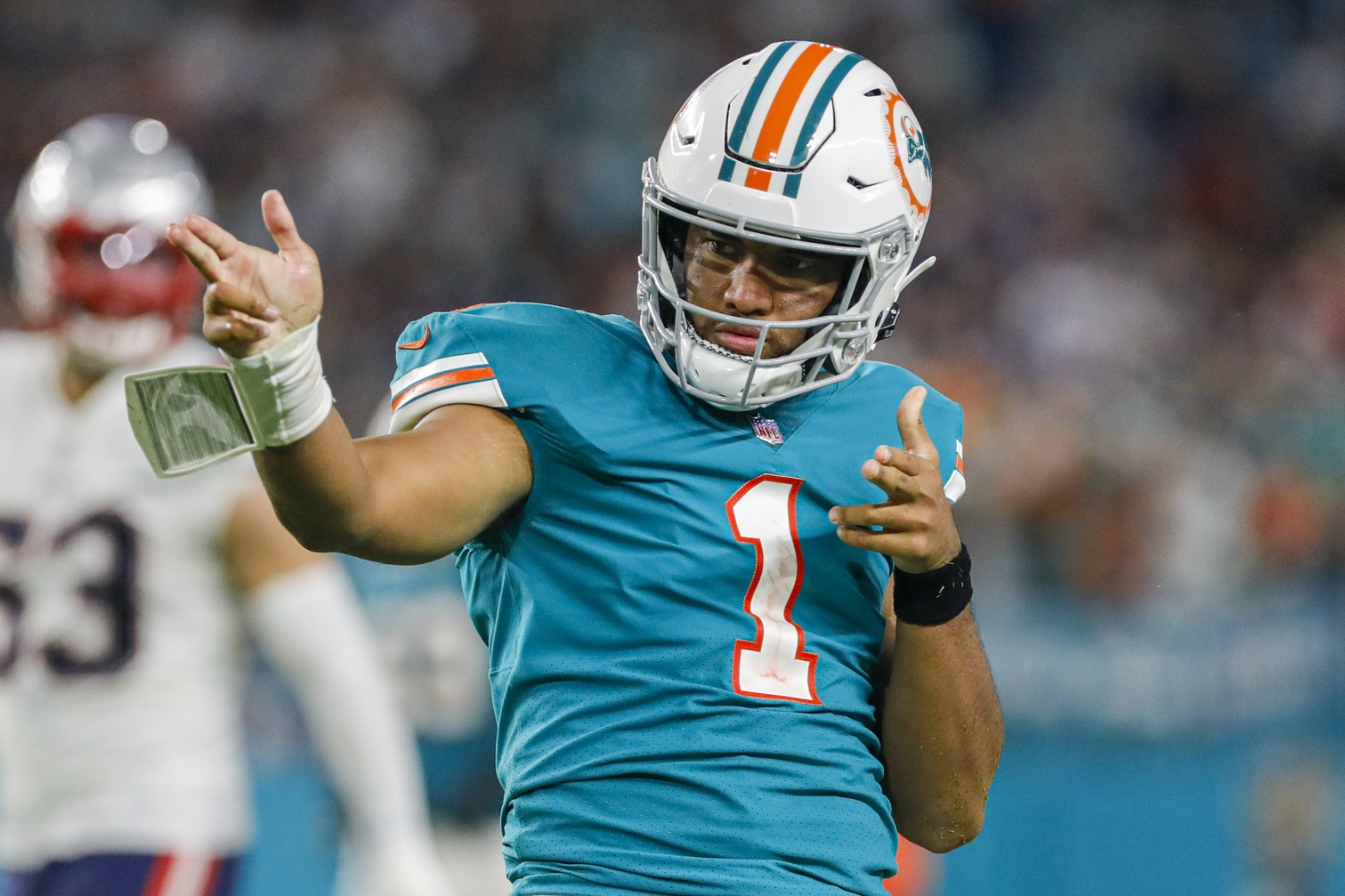 How Long Is Tua Tagovailoa’s Leash?

After a strong offseason full of big-name acquisitions on the offensive side of the ball, the Miami Dolphins are poised to be a dangerous contender in the AFC East. That is, only as long as quarterback Tua Tagovailoa proves himself with the best supporting cast he’s had since joining the Dolphins.

The problem that Tagovailoa now faces is that the offense around him is so strong that his leash can’t be as long if he faces struggles early in the season. If the Dolphins struggle to win games and Tagovailoa is a big reason for that, new head coach Mike McDaniel may elect to move on from the former first-rounder sooner rather than later.

A big part of that has to do with how much the Dolphins are trying to tailor their offense around their young quarterback this season. They signed Terron Armstead, the best offensive tackle available in free agency, as well as receiver Cedrick Wilson, running backs Sony Michel, Chase Edmonds, and Raheem Mostert, and traded for receiver Tyreek Hill. On top of that, the team hired McDaniel, an offensive guru and Shanahan disciple, to be their head coach.

With their current personnel and new head coach, Miami projects to be a pretty run-heavy team. Edmonds, Mostert, and Michel represent a three-headed monster in the backfield that Miami hasn’t seen in years. That will take some pressure off of Tagovailoa, but there’s still an expectation that he will deliver when called upon.

He can’t consistently miss his receivers over the middle or with overthrows or underthrows on the run or take too long to make his reads in the pocket, especially with Waddle and now Hill catching his passes. Those have all been issues in the past and could still continue even with a new supporting cast around him. The writing will be on the wall for Tagovailoa if he doesn’t show any further growth and development in his third season under a new, offensive-minded head coach.

Adding to the pressure to perform well is who Tagovailoa has behind him. Among Miami’s offseason moves was the signing of quarterback Teddy Bridgewater—a serviceable potential starter in his own right—to be their backup quarterback. Considering that Bridgewater doesn’t represent a lower ceiling if the Dolphins do have to resort to him as a starter, Tagovailoa’s leash gets even shorter. There are plenty of offensive weapons around whoever starts under center, so if Tagovailoa really can’t figure it out, Bridgewater will get his shot to get the Dolphins back on track.

If those factors weren’t enough, there’s also the fact that the AFC is loaded with contenders, meaning the Dolphins will need a strong season to make the playoffs. Miami could have to consider benching Tagovailoa earlier in the season if they believe that they’re a playoff-caliber team and that their quarterback is costing them wins. Given all the aforementioned talent on the roster, they should believe they can contend for a playoff spot, so once again, it’s up to Tagovailoa to prove himself.

As short as the third-year quarterback’s leash may seem with all of these competing factors, he’ll still have some leeway, at least early on.

Miami’s schedule to open the season is relatively tough with matchups against the New England Patriots, Baltimore Ravens, Buffalo Bills and Cincinnati Bengals in the first four weeks. It may turn out that Tagovailoa does everything right but the Dolphins still end up 1-3 or 0-4. That would no doubt be a frustrating start but Miami wouldn’t panic and bench their quarterback. Tagovailoa deserves a chance to prove himself with his new supporting cast in a large sample size and the Dolphins are going to do what they can to allow that to happen.

The Dolphins’ 2022 season will be largely dictated by whether or not Tagovailoa can show that he has developed as a passer after two seasons. Poor performances early in the season could get him benched quickly with Bridgewater ready to take over behind him. Strong showings, on the other hand, would solidify him as Miami’s starting quarterback for a few more years and could end the team’s playoff drought.