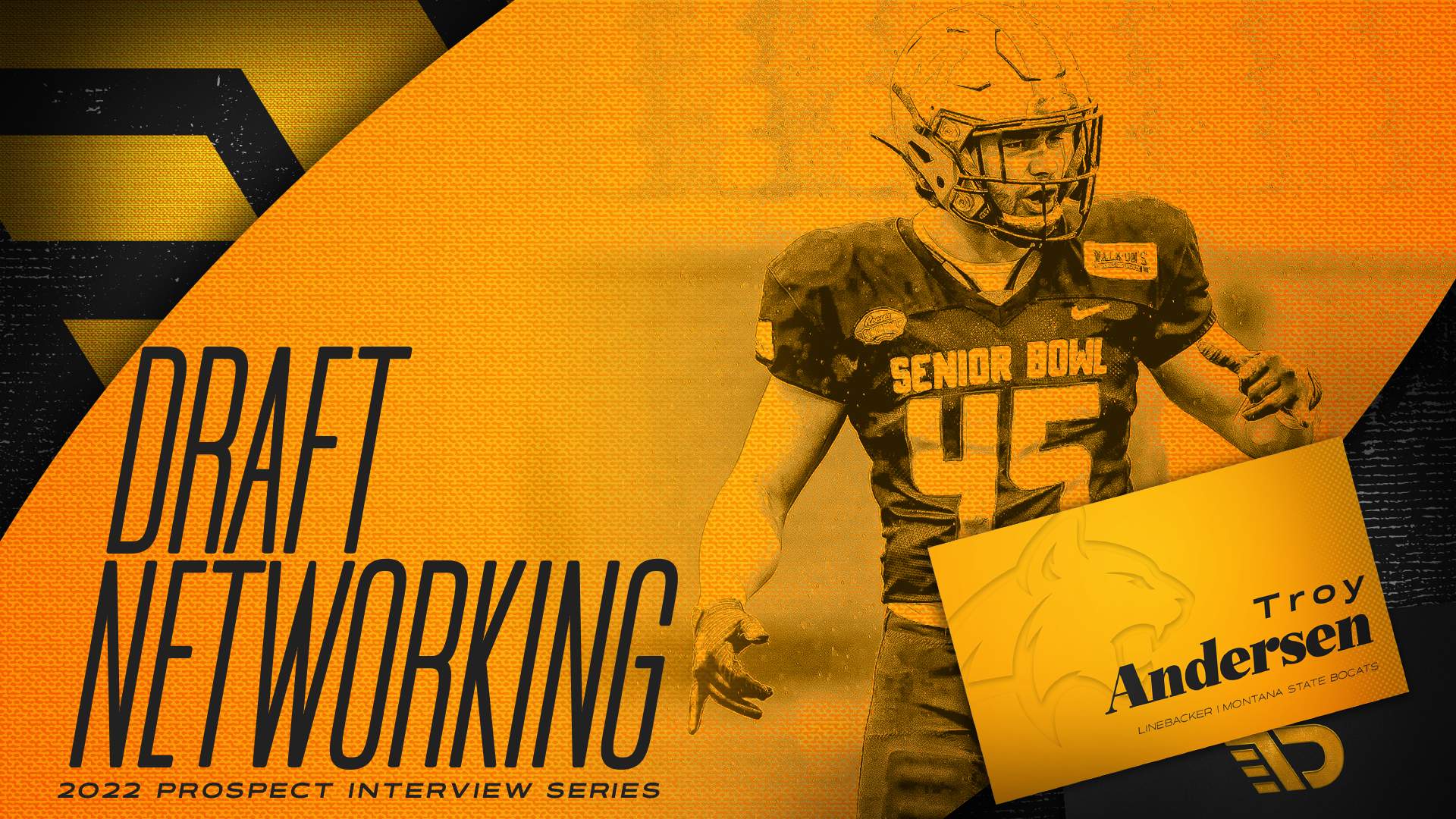 Montana State’s Troy Andersen is the most unique playmaker in the 2022 NFL Draft. Andersen made a legitimate impact at quarterback, running back, and linebacker throughout a star-studded and truly electric career with the Bobcats.

Andersen attended the NFL Scouting Combine and proceeded to place his draft stock on a jetpack by running the 40-yard dash in a blazing 4.42 seconds, which was the fastest time among all performing linebackers. Andersen also showcased his explosiveness by recording a 36-inch vertical and a 128-inch broad jump. All three results were truly elite, and Andersen has catapulted himself into the top-50 conversation.

Andersen recently spoke exclusively with The Draft Network about his combine performance and experience, what he loves about playing linebacker and running back, why he’s a prototypical linebacker that welcomes the physical aspects of the game, which teams he’s met with throughout the process, and so much more.

JM: In all my years of scouting and covering the draft, I don’t recall coming across many players such as yourself. You legitimately played linebacker and running back at Montana State, and you did both at an extremely high level. Heck, you even played some quarterback. How did you manage to maintain and balance responsibilities on both sides of the ball? It’s really unheard of.

TA: I arrived at college as a two-way player and I thought it was pretty normal at the time (laughs). It’s what I did in high school and it felt like the norm to me. At the time, I didn’t realize it was out of the ordinary. If I can play both ways and impact the game while spending the entire game on the field, I mean, why wouldn’t I be interested in doing that? I was like yeah, let’s do it (laughs). It was awesome.

It took me a while to realize it was considered unconventional and didn’t happen often. I was just trying to help our team win games. It was all about helping Montana State reach the desired level. I was really happy to do it.

TA: I think it helped me a ton. Having that background playing running back, and having played a little quarterback that one year and then having made the transition to defense, I feel like I sometimes see the field in the same manner as the opposing offense. I understand how they’re trying to attack us. It’s helped me so much. I know how offenses are trying to create space and attack defenses. It tells me a lot about where we’re at defensively. It’s been extremely beneficial for me to have that offensive background.

JM: You went to the NFL Scouting Combine and you were arguably the most explosive and successful linebacker in attendance. You ran the fastest 40-yard dash (4.42 seconds) among all linebackers, and you also recorded a 36-inch vertical and a 10-foot-8 broad jump while measuring in at 6-foot-3, 243 pounds. I imagine you were thrilled with your performance.

TA: Yeah, I was (laughs). With that said, I think you always want to strive for better. I was definitely happy with how I performed though. Going to the combine has been a lifelong dream of mine. I ran fast and I jumped high. I was really excited about what I did out there.

JM: Do you feel like those excellent results improved your draft stock in Indianapolis?

TA: I think so. I’ve been known to be a good athlete and a good football player. It was good for me to check those boxes at the combine and confirm those beliefs. I proved that I’m just as athletic as anybody else, and perhaps even more athletic. I enjoyed interviewing with the teams as well and getting that experience. I’ve begun building those relationships. It was definitely important.

JM: Speaking of those interviews, did you have many formal conversations throughout the course of the week? How did they go?

TA: I thought they went really well. I really enjoyed that aspect of the combine. I embraced the opportunity to sit down and have those in-depth conversations with teams. It felt very real and genuine to me. We were talking about football. I had formals with the Washington Commanders, Philadelphia Eagles, Buffalo Bills, and San Francisco 49ers. I met with a whole bunch of teams informally as well.

JM: There’s a lot of interest in you and it’s easy to see why. What position do you see yourself playing at the next level, and did teams offer any clarity on that subject throughout your interviews?

TA: That was a question I was asking teams throughout my meetings (laughs). I wanted to learn more about how NFL teams see me fitting in at the next level. I received a lot of good feedback.

JM: It’s obvious on tape. Do you see a scenario where maybe you’re a two-way player with special packages on offense?

TA: If that’s how my team wants to use me, I’d be more than thrilled with that sort of development (laughs). It goes back to what I said before. I just want to win football games. If playing offense helps us do that, I’d be more than happy. I’m up for anything that makes us a successful football team.

JM: What’s your favorite aspect of playing the linebacker position?

TA: I think I would just point to the ability to read and react to what’s going on around you. When you’re on the offensive side of the ball, you call a play and you identify if the defense is one-or-two-high coverage. That might dictate what the offense is trying to do but for the most part, they call a play and they run it.

On the defensive side of things, you call a play, but the offense dictates what you’re going to end up doing. You have to react and make some on-the-fly decisions. The uncertainty that comes with it, that’s what makes playing linebacker so much fun.

JM: I’m tempted to ask you what’s your favorite part about playing running back, too (laughs).

TA: You get to make a very direct impact on the game as a crucial member of the offense. When you’re carrying the ball, it feels like you’re really carrying the entire team. You can score touchdowns which is a lot of fun (laughs). It takes putting up points to win games.

Playing on offense is a lot of fun as well. I really enjoy playing on the defensive side of the ball, though.

JM: Your instincts at linebacker are excellent. Having played at Montana State, it’s inevitable that someone will refer to you as a “small-school” prospect. How do you typically respond to that?

TA: I went to school where I went to school. I don’t hide or shy away from that. I’m extremely proud to have attended and represented Montana State. Being a Bobcat meant everything to me.

Football is football everywhere. There are really great athletes, coaches, and football players all over the country, at all levels. The FCS is no different. We played some really good teams throughout the course of my time there. We played against who we played against. I can’t change or control that. I absolutely loved playing at Montana State.

JM: That’s the best way to approach that. On tape, I see a high-level, explosive athlete with sideline-to-sideline range that also loves to tackle. What do you love about the physical aspect of the game?

TA: That’s your ultimate goal as a linebacker. You’re playing the wrong position if you don’t love to tackle. I moved inside to the MIKE position this past season. Having previously played as an outside linebacker, I was a bit further removed from the box previously.

Moving inside so much was more fun for me. It allowed me to make a larger impact on the game. It goes back to what I said about playing running back and having an impact. I love being physical with people. It’s something that a linebacker has to love (laughs).

You have to be physical and you have to want to make plays. You have to put your body on the line every single down for the sake of your team. It’s something that I definitely love.

JM: You’re the prototypical linebacker, and everybody should want you on their team. I’ve really appreciated your time today. I feel like our conversation has highlighted why you’re one of the most explosive and unique playmakers in the draft. What kind of impact is Troy Andersen going to make at the next level?

TA: I think I can make a terrific impact. I’m hoping to come in and become that movable chess piece that can help a defense and help the team win a bunch of games. I want to help take an organization to the next level. I’m really excited for that opportunity.