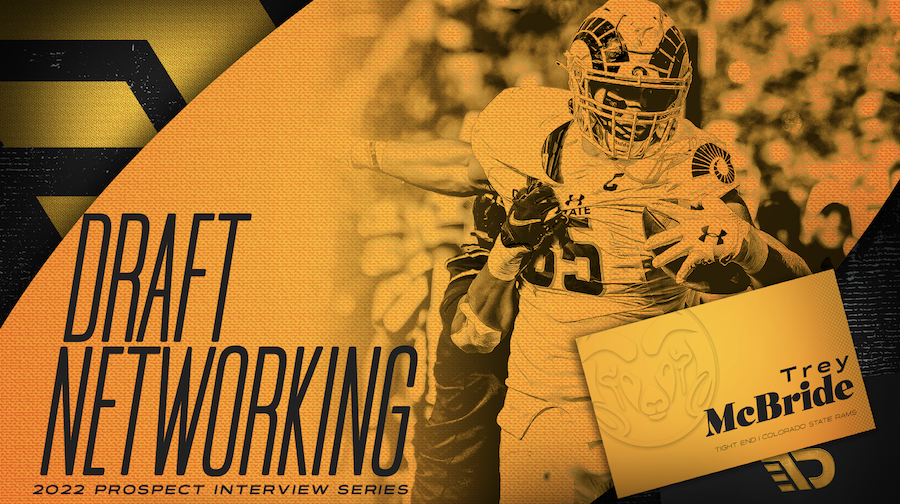 Colorado State’s Trey McBride has an excellent chance to be the first tight end selected in the 2022 NFL Draft. McBride posted one of the greatest seasons by an offensive player in Rams history and one of the all-time best campaigns by a tight end in FBS history en route to capturing the John Mackey Award.

NFL decision-makers are constantly searching for versatile tight ends that can play multiple roles for them offensively while especially impacting the passing game. An athletic pass-catcher that poses a difficult assignment for opposing linebackers and safeties, McBride’s dual-threat skill set makes him the perfect all-around tight end for teams looking to upgrade the position.

McBride recently spoke exclusively with The Draft Network about his illustrious career at Colorado State, his favorite route to run, which teams have shown interest in his services throughout the process, how he creates separation, and why he should be the first tight end selected in April.

JM: You were unbelievable in 2021 by recording 90 receptions for 1,121 yards. What allowed you to take such a big step forward this past season?

McBride: I think my coaches did an excellent job putting me in desired situations. They believed in me and placed a ton of trust in my abilities. They put me in a great position to be successful. I have to thank them and my teammates. I really think my coaches were the biggest reason behind that. They gave me opportunities. That’s why I took that step forward.

JM: I imagine having only appeared in four games in 2020 provided extra motivation for you to experience an especially fruitful campaign in your senior season.

McBride: It definitely did. The entire pandemic situation was very frustrating. Roughly half of our games got canceled. I really didn’t know when I would play my next game of football at one point. I remained eager to get back on the field. Not having a proper 2020 season, having only played four games certainly made me eager for the 2021 campaign to kick off. I was extremely excited to play football again. I was ready to make the most of my last season, especially when taking that 2020 season into account.

JM: It showed. You recently attended the NFL Scouting Combine. The measurements were excellent. You clocked in at 6-foot-4 and 246 pounds. What was your overall experience like?

McBride: It was a great experience. It was one of those things and one of those events that I’ve dreamt about my entire life. It was a once-in-a-lifetime opportunity to go down to the combine and compete alongside my fellow draft prospects. I showed the country what I’m capable of. I was around some of the best players in the country. It was awesome. I interviewed with a bunch of great NFL teams and coaches. It truly was the ultimate experience. It was an unbelievable week.

JM: The interview process is also important, and you touched on it briefly. Who are some of the teams you met with formally at the combine, and do you have any virtual visits or in-person top-30 visits coming up?

McBride: I met with just about every team formally and informally at the combine. I met with tight end position coaches, head coaches, scouts, general managers, and so on. Whatever it was, I met with essentially every team. Since then, I’ve been doing some Zoom calls with tight end position coaches and other staff members. I’ve met with the Tennessee Titans, Cincinnati Bengals, Tampa Bay Buccaneers, New York Giants, New York Jets, Buffalo Bills, and a few others. I have a few top-30 visits coming up as well. It’s been a very exciting process. I’ve probably met with every team. It’s been great.

JM: There’s a lot of interest in you and it’s easy to see why. When I turn the tape on, I see a tight end with terrific athleticism. You make a huge impact in the passing game. How did you develop that aspect of your game?

McBride: I was almost exclusively a run blocker earlier in my career. That’s how I initially got on the field and earned the trust of my coaches and my teammates. That’s where I made my money early on in my career at Colorado State. As everyone around me began showing more belief in me, they began showing more faith in me by giving me more opportunities. I knew I was ready to prove myself as a playmaker. When the ball began coming my way, I started making those plays. I expect to come down with every target thrown my way. I have a mindset that tells me I’m going to make that play. I carry that faith with me on every snap.

JM: You’re a great route-runner as well. You’re extremely savvy. Do you have a favorite route to run?

McBride: I enjoy running a ton of different routes. I think I can consistently win on any out-breaking route. I can win every single time in man coverage. Truthfully, there isn’t a route in the route tree that I don’t feel comfortable running.

JM: What are some of the ways that you create separation?

McBridge: I’m a quick and agile route runner first and foremost. I’m able to beat defenders with quickness. At the end of the day, I have a high understanding of how to use my body and my frame to my advantage. I catch the ball away from my body, which is something that really helps. I have a bigger body at the tight end position and I know how to use my body to shield me from my opponent. Using your body and catching the ball away from it are the first two aspects that come to mind. I’m always working on that. Getting into people, leaning into them, sticking them, giving them something at the top to get open always helps as well.

JM: It shows on tape. I love the way you run routes. What’s your favorite aspect of playing the tight end position?

McBride: I love the nastiness and grittiness that comes with playing as an in-line blocker. Being able to do that, when paired with going out there and catching touchdowns, it allows you to experience the best of both worlds. I might be a little biased, but I think the tight end position is the coolest position on the field (laughs). We really get to do a little bit of everything. You’re an offensive lineman, but you’re also a receiver (laughs). It’s a hybrid position that allows you to do everything. That’s what I love so much about it.

JM: You’ve talked a lot about playing as a blocker and I want to expand on that topic. You do terrific work in the running game. You possess the skill set necessary to play as an in-line blocker. What do you enjoy about that?

McBride: It goes back to what I said earlier. That’s really how I initially got on the field early on at CSU. I love the nastiness, grittiness, and physical toughness that’s required. It’s me against you at the end of the day and may the best man win. Who’s going to win that one-v-one battle? The tougher man wins. It’s the most physical aspect of the game. I love it, man. The gritty nastiness of being a blocking tight end is so much fun.

JM: Your passion for blocking pops on tape. Colorado State is sometimes referred to as a “small school” being that it’s an FBS program. That may lead to some labeling you as a “small-school” prospect. How do you typically respond to that?

McBride: I think my tape speaks for itself. I went down to the Senior Bowl and had a terrific week against SEC defenders. I’ve done it against everyone in the country I’ve come across. Playing at Colorado State didn’t have a negative impact on my progression. Not at all. That’s where I went to school and I’m glad that I did that. I’m capable of doing it against anybody in the country. It didn’t matter who I played against.

JM: That’s the best way to handle that question. What’s the best game you ever played in a Colorado State jersey in your opinion?

McBride: It’s tough to choose. I would probably say that my game against Utah State from this past season really sticks out to me. I really made an impact in the running game, and I also was able to catch the ball quite a bit in our passing offense as well. Toledo from this past season was another good one. I honestly think I played a ton of great games. It’s tough to pick one.

JM: We won’t argue with that. If you could catch a pass from one quarterback in the NFL, who would you choose and why?

McBride: With Tom Brady coming out of retirement, I think he’s the obvious choice right now. He’s been in the NFL for 23 years. It’s an astounding accomplishment. He has so much experience. Playing with him and catching a touchdown from him would represent the ultimate honor. It would mean the world to me but there are so many great quarterbacks in the NFL currently. Brady sticks out the most due to the legacy he’s carved out for himself.

JM: I’ve really appreciated your time today. This conversation has highlighted why you may be the most dynamic tight end in the 2022 NFL Draft. What kind of impact is Trey McBride going to make at the next level?

McBride: You’re going to get a guy that’s a winner and competitor at the end of the day. You’re never going to have to worry about me off the field or anything of that nature. I’ll do anything to help my team win games. I’m going to be fun to watch at the next level. Stay tuned. I’m looking forward to this journey.