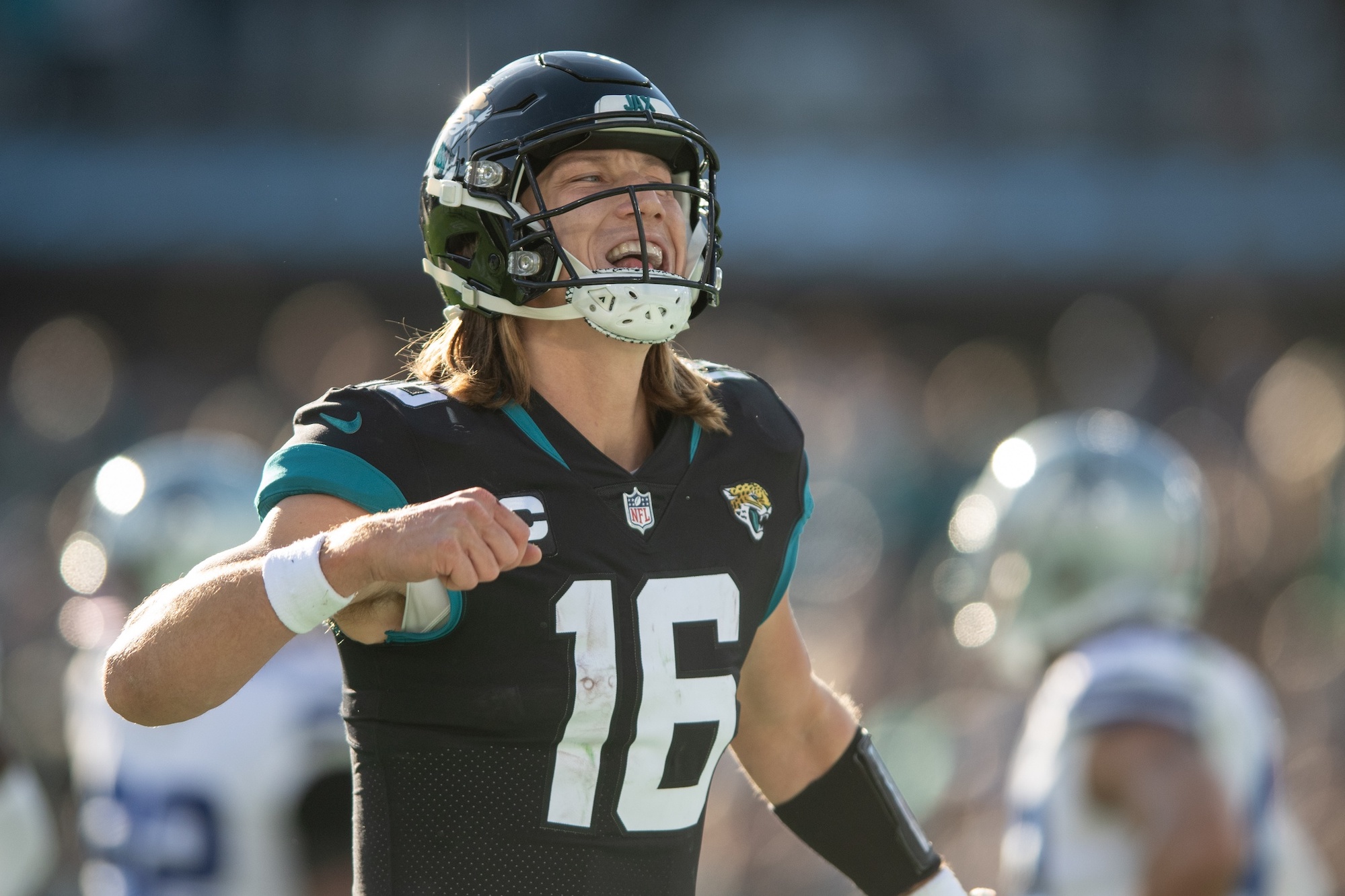 Jacksonville Jaguars starting quarterback Trevor Lawrence was outstanding in Sunday’s thrilling 40-34 overtime victory over the Dallas Cowboys. Lawrence completed 27-of-42 passing attempts for 318 yards, four touchdowns, and one interception. Lawrence is currently playing like a top-10 quarterback in the NFL.

Sunday’s outing was the first four-touchdown game of Lawrence’s ascending career. The No. 1 overall selection in the 2021 NFL Draft appears especially locked in right now. Lawrence is playing like the generational talent people touted him as coming out of Clemson.

Down 27-10 in the third quarter, Lawrence made a resume-defining play that kickstarted the Jaguars’ miraculous comeback. A scrambling, off-platform Lawrence rolled out of the pocket and found a streaking Zay Jones for an explosive 59-yard touchdown. Lawrence showcased the type of rare athletic ability that is helping him develop into a legitimate franchise quarterback right before our eyes.

He threw two more second-half touchdowns to force the game into overtime.

Lawrence has been especially excellent since the beginning of November. In Jacksonville’s latest six contests, Lawrence has completed 70.4% (157-of-223) of his passing attempts for 1,680 passing yards, 14 touchdowns, and one interception. Lawrence has posted a quarterback rating of 106.1 or greater in five of those showings. The Jaguars have gone 4-2 throughout Lawrence’s ongoing career-best stretch. He has now thrown 24 touchdowns and just seven interceptions this season.

It represents a much-welcomed change in form for Lawrence, who began the 2022 campaign in a rather disappointing fashion. The same poor decision-making and questionable ball placement that derailed Lawrence’s rookie season threatened to become a concerning pattern. Lawrence had difficulty navigating through the early portion of his schedule.

Prior to Lawrence’s breakout showing against the Las Vegas Raiders in early November, the Jaguars lost five consecutive contests. Lawrence completed 58.1% of his passing attempts or less in four of those games. There was a 133-yard, two-interception performance in a four-point loss to the Denver Broncos. There was a six-point, two-interception showing against the lowly Houston Texans. Lawrence completed a season-low 47.8% of his attempts against the Philadelphia Eagles. Lawrence has been a different quarterback since—it’s safe to say he has firmly placed those struggles in his rearview mirror.

We’re currently witnessing the Jags reap the benefits of a terrific offseason decision. Appointing quarterback-guru Doug Pederson as their head coach was done in the best interest of Lawrence’s development. Replacing the controversial Urban Meyer with Pederson already qualifies as a home-run decision for Jaguars general manager Trent Baalke.

Pederson has been the quarterback whisperer the Jaguars organization envisioned and Lawrence is showcasing terrific command of Pederson’s quarterback-friendly system. Lawrence is taking advantage of his opportunities to course-correct last season’s underwhelming performances. The Pederson-Lawrence duo is currently performing as advertised by meeting the lofty expectations that were set out for them throughout the offseason.

The 6-8 Jaguars are now shockingly back in the playoff picture. Lawrence’s form, paired with the Tennessee Titans’ four-game losing streak, has catapulted the Jaguars into second place and one game out of the AFC South lead. Jacksonville owns the tiebreaker over the Titans and a Week 18 regular-season finale meeting looms large. The Jaguars may ride Lawrence’s form into the postseason.