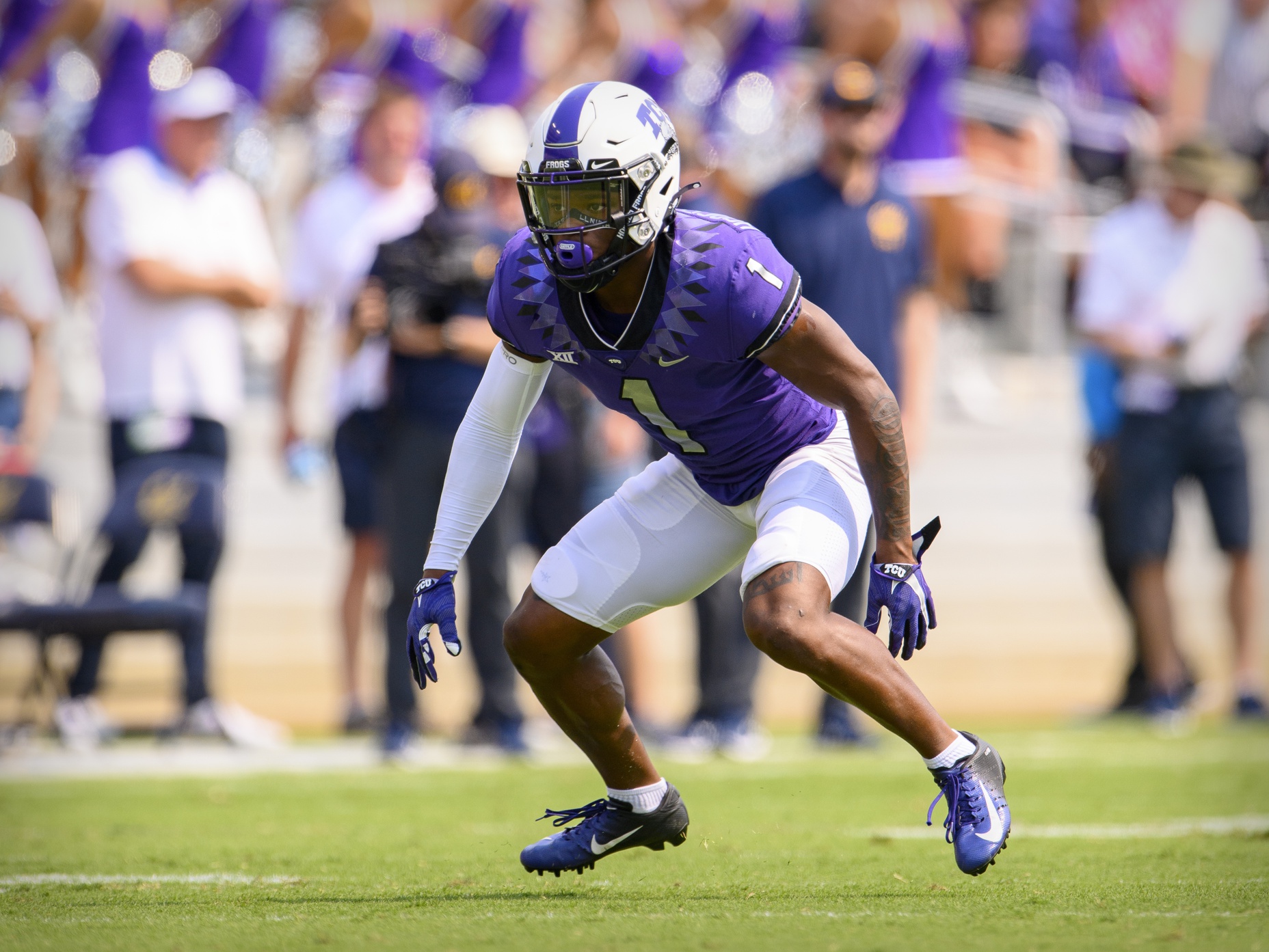 Hodges-Tomlinson’s latest interception occurred against Texas in TCU’s massive 17-10 victory over the Longhorns. He showcased stickiness and the ability to stay within the hip pocket of elite Longhorns receiver Xavier Worthy throughout the deep-developing route. Hodges-Tomlinson finished the play by pouncing on a Quinn Ewers underthrow by intercepting it, returning it 20 yards the other way and awarding possession back to his offense.

TCU’s Tre’Vius Hodges-Tomlinson with his third big play of the half here (already has an INT and another PBU).

There’s the instincts and feistiness that have so many excited about him as a nickel prospect in the 2023 NFL Draft class. pic.twitter.com/wZC5Yy7PYt

Hodges-Tomlinson entered his senior campaign with questions surrounding his lack of ball production. He entered the season with a modest two career interceptions under his belt, both of which occurred last season. Hodges-Tomlinson has already set a new personal best with three interceptions this season in just 10 regular-season contests. The Waco, Texas native already has more pass breakups (8) this season than last year (7) despite a minimum of three additional games remaining on TCU’s upcoming schedule.

Hodges-Tomlinson now has 29 (and counting) career pass breakups. Converting those opportunities into takeaways was the previous hangup. He is showcasing the ability to finish those plays this season.

Hodges-Tomlinson has been a shutdown cornerback for the undefeated 10-0 Horned Frogs. He’s currently allowing a passer rating of just 47.3 via Pro Football Focus, which is the second-lowest mark among all Big 12 cornerbacks this season. Hodges-Tomlinson’s showings are a driving force behind TCU’s current success as the fourth-ranked program in the nation.

A two-time First Team All-Big-12 selection in 2020 and 2021, Hodges-Tomlinson’s athletic ability jumps off the screen. He possesses the foot speed necessary to mirror-and-match opposing receivers in press-man situations. He possesses a special amount of feistiness throughout the entirety of the route. A high football IQ paired with reactionary athleticism allows Hodges-Tomlinson to routinely compete at the catch point.

The 5-foot-9, 177-pounder will be described as undersized throughout the pre-draft process, but he’s continuously proving his aptness to play both on the boundary and in the slot. Hodges-Tomlinson is no smaller than Indianapolis Colts cornerback Kenny Moore II, who has developed into one of the league’s best (and highest-paid) nickel corners. NFL teams fumbled Moore’s evaluation, allowing him to go undrafted. They shouldn’t make the same mistake with Hodges-Tomlinson, who’s more versatile than Moore was and carries top-100 pick potential.

Rostering high-end nickel corners has become a necessity in today’s pass-happy league. NFL offenses have showcased a willingness to line up their best receivers in the slot with increased frequency in recent years. They’re no longer penciling undersized receivers as designated slots. That shift in thinking has made the nickel corner position a defensive cornerstone while combating 11 personnel.

Hodges-Tomlinson will soon put a bow on a terrific senior campaign. He’s done his pre-draft stock a sizable favor via improved ball production. He is one of the most intriguing and complete cornerback prospects in the 2023 NFL Draft.