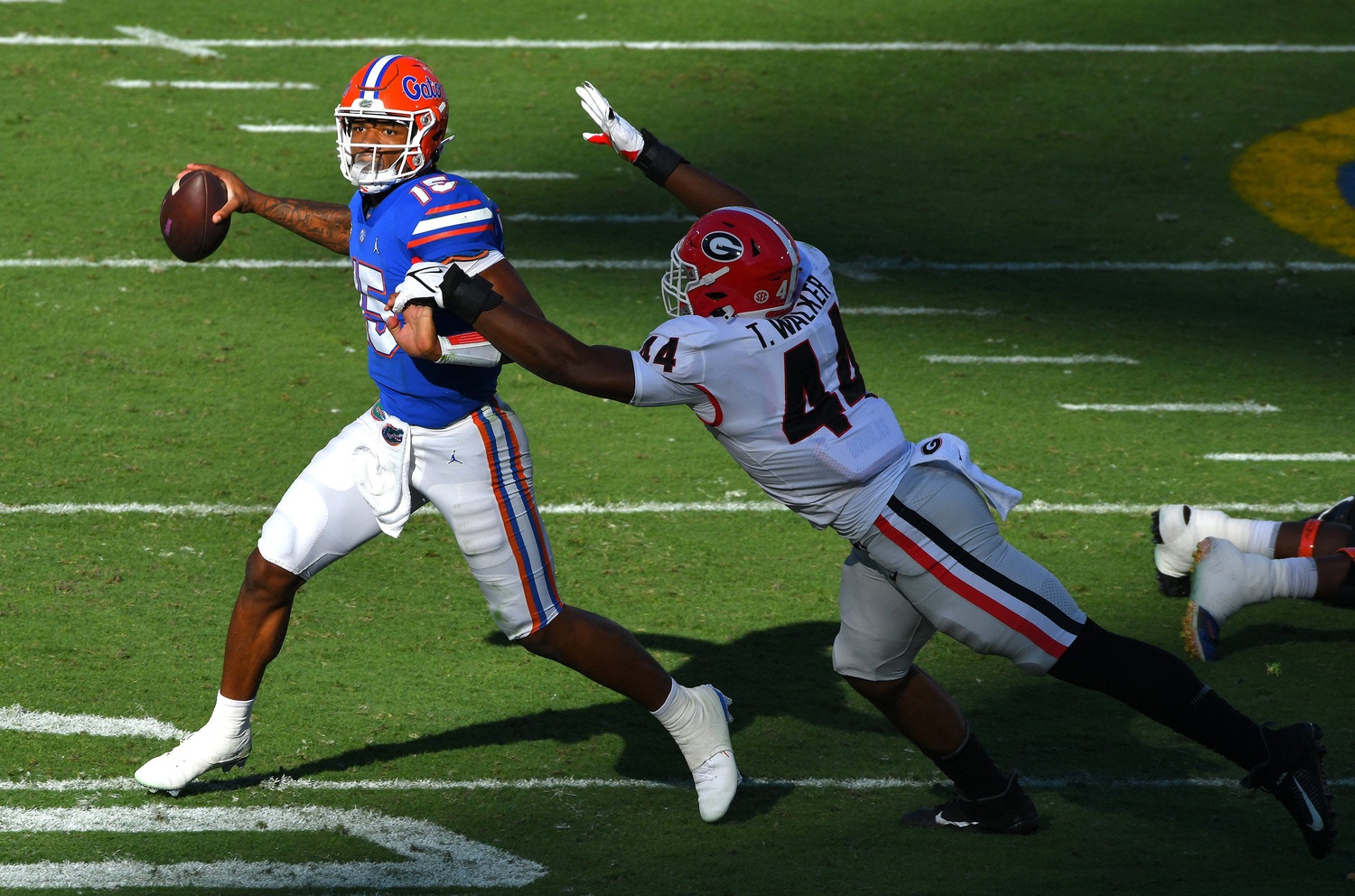 We are officially fewer than 10 days away from the first night of the 2022 NFL Draft and there is still no clear answer for who will be this year’s first overall pick. Last year, it was all about Trevor Lawrence before the 2020 college season even began, up until the first night of the draft. This year, we’ve seen a bunch of potential candidates cycling through as potential fits for the Jacksonville Jaguars. Edge defender Kayvon Thibodeaux was up there, then fellow edge prospect Aidan Hutchinson, then an offensive tackle—be it Ikem Ekwonu or Evan Neal. Not long ago, it seemed like Hutchinson had stepped back in as the favorite to be the first player off the board. Now, the most recent rumors suggest meteoric riser and Georgia edge rusher Travon Walker could be in the mix.

Walker is a fantastic prospect whose real upside comes with his versatility across the defensive line. He’s projected as an edge rusher, but he found most success playing in the 1 and 3-technique positions in college. His explosiveness, strength and flexibility make him a scary athlete to contend with at the line of scrimmage, and he succeeds both rushing the passer and defending the run.

Still, he’s not a lock for the first overall pick with Hutchinson and those offensive tackles still looming. Here are the teams that are the best fits for Walker if he doesn’t end up with the Jaguars.

If the Jaguars draft an offensive tackle at No. 1, Hutchinson is still the most likely pick for Detroit. If it’s Hutchinson who comes off the board first, Walker is a great consolation prize, so long as they don’t draft Malik Willis here instead. Detroit finished in the bottom two in pass rush win rate in the NFL in 2021, and they were also a bottom-10 team in successfully stopping the run. The Lions just extended their 2021 sack leader, Charles Harris, but they could still really use a bigger impact player on the edge. Walker could be that impactful defensive cornerstone to build around as the second pick.

Houston is a team that really just needs to draft the best player available with the third pick. Walker is one of the most athletically gifted defensive end prospects the NFL Combine has ever seen and his versatility makes him an easy fit for the Texans defensive front. They haven’t had as much success on the edge since J.J. Watt left the team after the 2020 season, and Walker could represent a return to stability in the front seven, which is an important asset for a rebuilding team.

The Giants are another team that needs to go with the best player available strategy with both of their first-round picks. They are needy everywhere, but they especially need help at offensive tackle and edge rusher. Walker could represent the best of both worlds for New York: the best player available and someone who fills a position of need. Azeez Ojulari was already a solid addition to their pass rush with last year’s second-round pick, so bringing in Walker this year only further bolsters that front seven.

After such a massive rise near the top of draft boards in recent weeks, it seems unlikely—though not impossible—that Walker will fall as far as the eighth-overall pick in the draft. If he does, the Falcons should jump on this opportunity. Atlanta is right down there with the Lions and Giants as a team that had very little success rushing the passer in 2021. The Falcons were dead last in the NFL with just 18.0 sacks last season—11.0 fewer than the next-worst team, the Eagles. They were also worse than both teams at stopping the run, as well. Bringing in a dual-threat like Walker who can both pressure quarterbacks and defend the run would be huge for the needy Falcons defense. It doesn’t hurt that the fans would love to see him stay in Georgia, too.