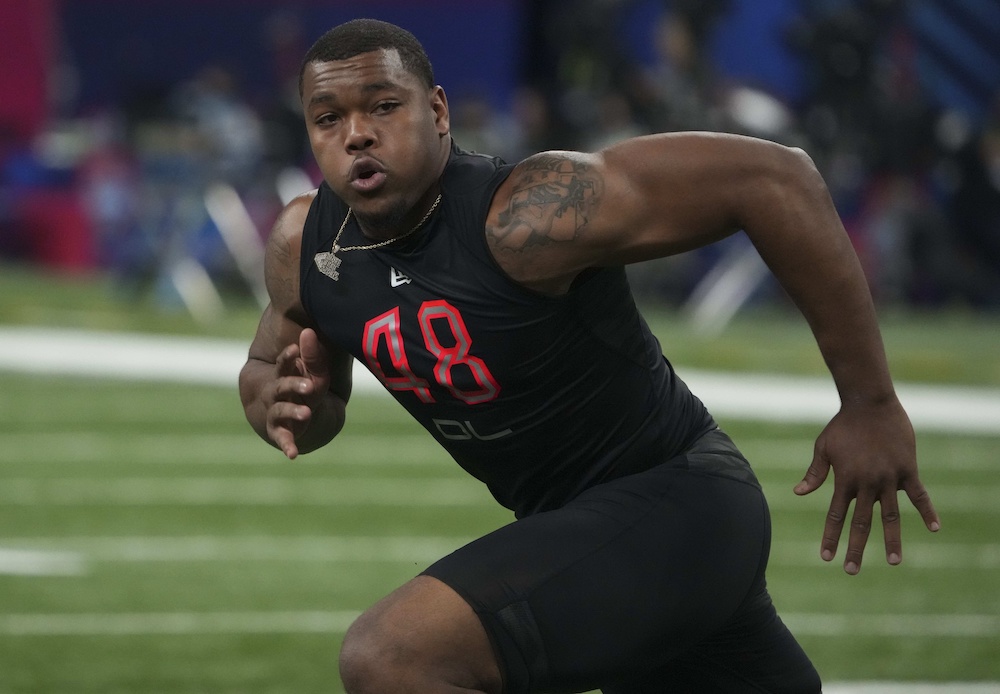 Why Travon Walker Could Go First Overall in 2022 NFL Draft

The 2022 NFL Draft is mercilessly approaching and the Jacksonville Jaguars have a sizable decision to make as owners of the No. 1 overall selection. Early in the process, the Jaguars were expected to address and upgrade their offensive line by potentially drafting Alabama’s Evan Neal or NC State’s Ikem Ekwonu with the first pick. It was understandable. Better protecting franchise quarterback Trevor Lawrence is of the utmost importance going forward. While General Manager Trent Baalke and Head Coach Doug Pederson may still go in that direction, it appears considerably less likely after their dealings throughout the first and second wave of free agency. Jacksonville made a surprising decision to apply the franchise tag on starting left tackle Cam Robinson in a move that will keep him as a Jaguar for at least one more campaign. The addition of Brandon Scherff at guard has further improved a Jaguars offensive line that may be relatively set heading into the season.

Jacksonville’s offseason decision-making process has led many to believe that Michigan’s defensive end Aidan Hutchinson is now the hands-on favorite to become the No. 1 overall selection, but recent modifications by various online oddsmakers reveal an intriguing candidate that may be emerging at the opportune moment. Georgia defensive end Travon Walker has received a considerable boost in his odds to earn the top honor and it’s easy to understand why on the surface. Walker possesses rare tools and abilities and would be an excellent fit in Jacksonville’s new-look defense.

Walker has appropriately attached a jetpack to his pre-draft stock by acing the process. He has showcased elite athleticism with testing results that have reached historic heights. The Thomaston, Georgia native measured in at the NFL Scouting Combine at 6-foot-5 and 272 pounds with arms longer than 35 inches. These are the intangibles NFL coaching staffs drool over. Walker somehow managed to impress even further when the testing portion began. A 4.51 in the 40-yard dash at his position was one of the most staggering results we’ve witnessed in recent memory. A 6.89 in the three-cone was an elite result regardless of position and serves as an excellent indication of Walker’s quick-twitch ability. Walker put an appropriate bow on his day by posting a 123-inch broad jump and 35.5-inch vertical. All in all, it represents an athletic profile that gives Walker a pre-and-post-snap advantage due to terrific size and length. As a pass rusher, he possesses rare explosion and get-off. Walker converts speed-to-power at an alarming, efficient rate that’s difficult for opposing offensive tackles to deal with. Opposing offensive linemen are going to have an extremely difficult time keeping Walker out of their backfield at the next level.

New Jaguars Defensive Coordinator Mike Caldwell arrives in Jacksonville after spending the previous seven seasons working under Todd Bowles with the New York Jets and Tampa Bay Buccaneers. Caldwell is a student of Bowles’ aggressive scheme and he’s expected to employ a similar system in Jacksonville. Caldwell’s defense is expected to remain fluid and multiple but stay a 3-4 base front with a healthy amount of aggression and blitzing from all levels of the defense. Caldwell, who played more than 10 seasons professionally, is a forward-thinking defensive mind that enjoys getting creative with his personnel while placing his players in ideal scenarios that suit their abilities. His overall approach to the game would mesh nicely with Walker’s skill set, which is best utilized when asked to play as a versatile lineman that can move all over the defensive line while taking advantage of mismatch opportunities. Walker’s rare athletic abilities pair nicely with his experiences at Georgia, where he played all over the formation, making him an ideal fit in Caldwell’s defense as a game-changer that can win both on the edge and across the interior. Walker deserves to be coached by the type of innovative mind Caldwell boasts and it’s easy to see the two men meshing well throughout the process.

Baalke, Pederson, and the Jaguars are roughly one month away from making a decision that could positively alter the trajectory of their franchise. Walker would certainly represent an outside-the-box selection but that doesn’t necessarily mean that he would be the wrong one.