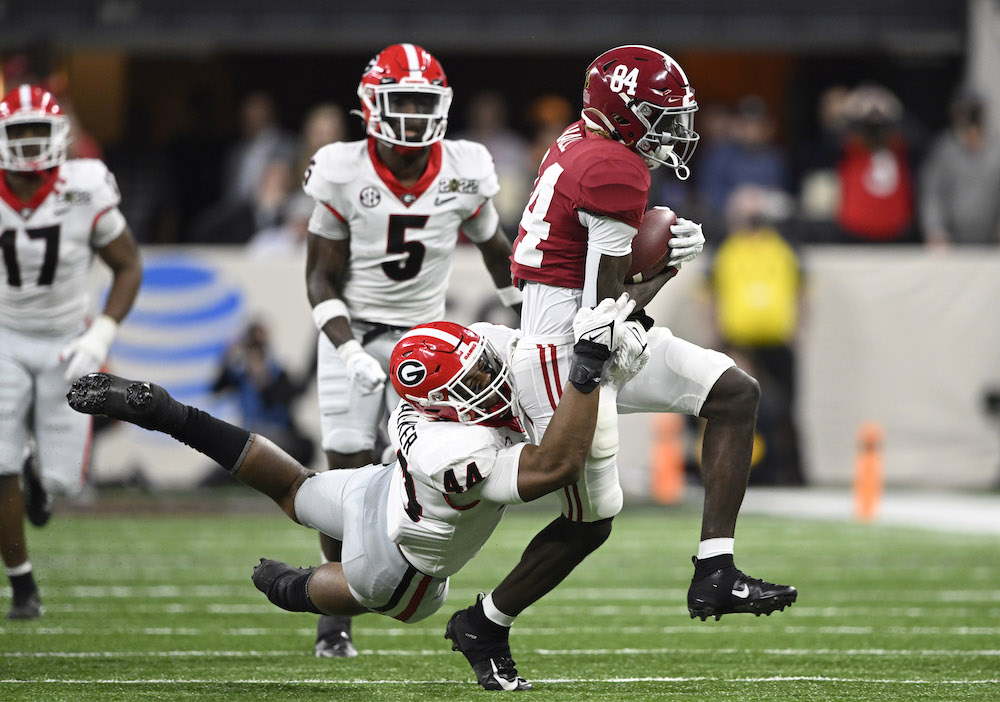 It’s often the common theme this time of year: a sexy prospect with all the tools in the world to rejuvenate one side of the ball. Recent history has seen its fair share of jaw-dropping edge talent, from the Bosa brothers to Myles Garrett, Chase Young and Jadaveon Clowney. Enter position-less defender Travon Walker into the fold as the next do-it-all threat along the defensive front whose stock has entered warpspeed just a month away from the NFL Draft.

A mainstay along a historic Georgia Bulldogs defense this fall, Walker’s impact was mostly kicked under the rug for the majority of the fall, working alongside the monstrous man that is Jordan Davis and potential Day 1 pick Devonte Wyatt. But Walker was a talent often overlooked and taken for granted with the overflowing amount of NFL talent that took the field for Kirby Smart’s unit each and every Saturday. However, as the draft cycle has progressed, film is scoured through three, four times over as clubs across the league begin to finalize their prospect pecking order. It’s given them a chance to notice Walker and his true position-less talent. Now it seems, he could very well see his name lead off the selection process when the Jacksonville Jaguars are on the clock with the first overall pick.

A team over the last few years that has continued to pour assets into the front seven and are entering year two of the Trevor Lawrence-era, the Jaguars are a franchise that has found itself lost in translation and losing ground on what is an overwhelmingly deep AFC. After taking  Lawrence last fall, the easy pick this winter has been to slot a tackle at No. 1 overall. Whether it’s Alabama’s Evan Neal or N.C. State’s Ickey Ekwonu, shoring up Lawrence’s blindside looked to be the move until the team questionably tagged Cam Robinson. Now, it could be a scenario similar to last spring when the Detroit Lions took Penei Sewell and kicked him to right tackle in favor of Taylor Decker on the opposite side. But after drafting Jawaan Taylor in the second round in 2019, the Jaguars look to have their starting anchors in place – at least for this fall.

For Walker, there is no competition for snaps and no need for newly minted Head Coach Doug Pederson to shuffle bodies to ‘make room’ for the potential top overall selection – his fit is ideal.

In Mike Caldwell’s 3-4 hybrid front, Walker’s versatility should shine considering the amount of talent the Jaguars have littered across the front seven. They’ve stacked up wily veteran Dawuane Smoot, pocket-pushing nose tackle Roy Robertson-Harris, fellow first-rounders in Josh Allen and K’Lavon Chiasson, and linebacker Foyasade Oluokun, who the team signed in free agency. Walker, whether he aligns with his hand in the dirt on the interior or in a two-point stance on the outside with his ears pinned back, presents an alignment-versatile defender without limitations on his performance ceiling. He also possesses a unique flexibility to wreak havoc at every single spot along the defensive line unmatched by any in the current class.

It’s been a long road to get here and while the dust won’t settle until names come flying off the board on draft night, the shuffling of prospects and tiring rumors of where teams will ultimately go is just a common procession this time of year. It’s what keeps us awake late into the night, football gods help us all. While consecutive years of owning of the top overall pick could remain a blessing in disguise for the rebuilding Jaguars as they look to push past the threshold of mediocrity, selecting Walker to further take pressure off of their young signal-caller could be the ideal fit for a true day one do-it-all impact athlete.