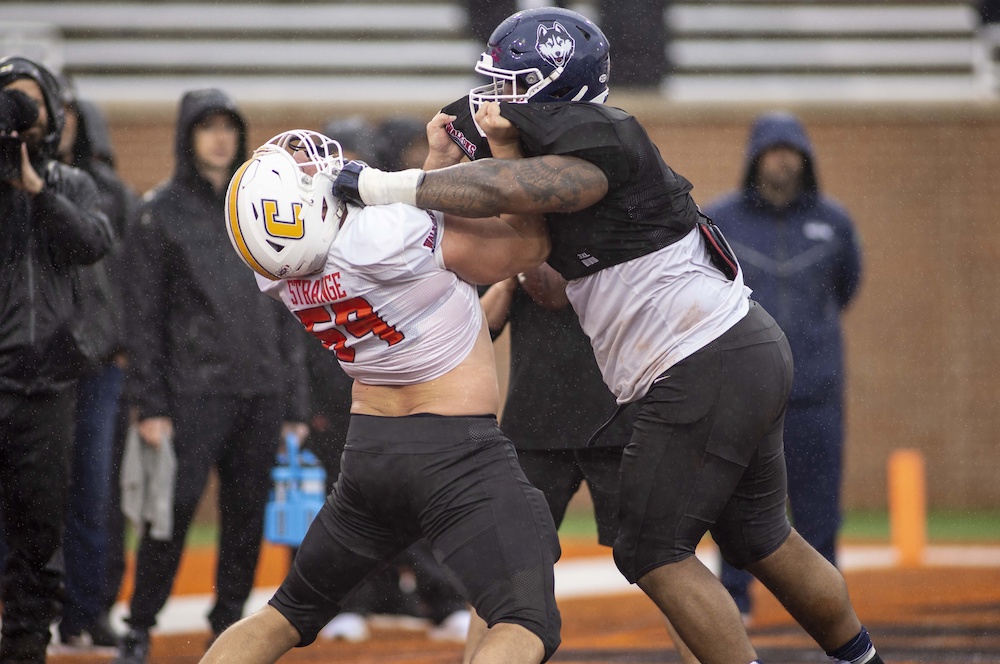 The 2022 NFL Draft Class is loaded with talent throughout the front seven. Edge rushers like Aidan Hutichson and Jermaine Johnson, linebackers Nakobe Dean and Devin Lloyd, and interior linemen like Perrion Winfrey and Jordan Davis all highlight the premier talent of the group. But, one of the most intriguing prospects of the entire group did not come from a blue-chip program but rather from the University of Connecticut. Travis Jones chose the Huskies over schools like Boston College, Rutgers and Temple, and it was a relatively good choice. Though his team struggled throughout his career, Jones played a significant role in the defense since arriving on campus. As an underclassman, he produced at an extremely high level, racking up 86 total tackles, 11.5 tackles for loss, and 3.5 sacks in 21 starts. He continued his production last year after missing the 2020 season due to COVID-19 with an impressive 47 tackles, 7.5 TFLs and 4.5 sacks.

After dominating during the regular season, Jones went to the Senior Bowl and raised his draft stock with an impressive display of violence, power and hands controlling the offensive line during practices. Jones showcased his elite hand placement during the one-on-ones, consistently getting to the back of his opponent’s pads and using it to propel him into the backfield. He also demonstrated his power and pad level to get extension and collapse the pocket. Though he won the line of scrimmage steadily, his lack of feel on his bullrushes could cause him to get pressures instead of sacks.

Jones has shown the ability to come in and contribute to an NFL defense right away, especially on early downs, and he has exhibited a lot of good characteristics against the pass. With improved coaching, he could become an every-down tackle. He looks to be at his best playing in a zero or one-technique, allowing him to play heavily in the A gap; he has also shown the ability to play in even and odd fronts. It is now time to look at which teams could benefit the most from selecting Jones on Thursday.

Jones could instantly be a valued part of the Raiders’ rotation and potential successor to Johnathan Hankins. His versatility could allow him to play with both Hankins and Bilal Nichols on every down. Jones’ ability to collapse the pocket could help pass rushers Chandler Jones and Maxx Crosby get to the quarterback in a stacked division.

The Steelers could be a very intriguing option to draft Jones in the second round, and he would come in and be a day one starter for Pittsburgh. His toughness and relentlessness fit right into the Steelers’ hard nose culture. The possibility of combining Jones and defensive tackle Cameron Heyward to crush the pocket for outside linebacker T.J. Watt and dominate opposing offensive lines in the run game could be too much to pass up on next week.

Jones would be a welcomed addition to the Ravens’ rotation. Though the Ravens did bring defensive tackle Michael Pierce back to Baltimore during the free agency period, outside of that, there does not seem to be another viable option to take snaps. Jones’ stoutness against the run and violence against the run will free linebackers Odafe Oweh and Patrick McQueen to make plays around him. His violent hands and cranked motor makes him an ideal fit in Baltimore as they look to return to their dominant defenses of the past.