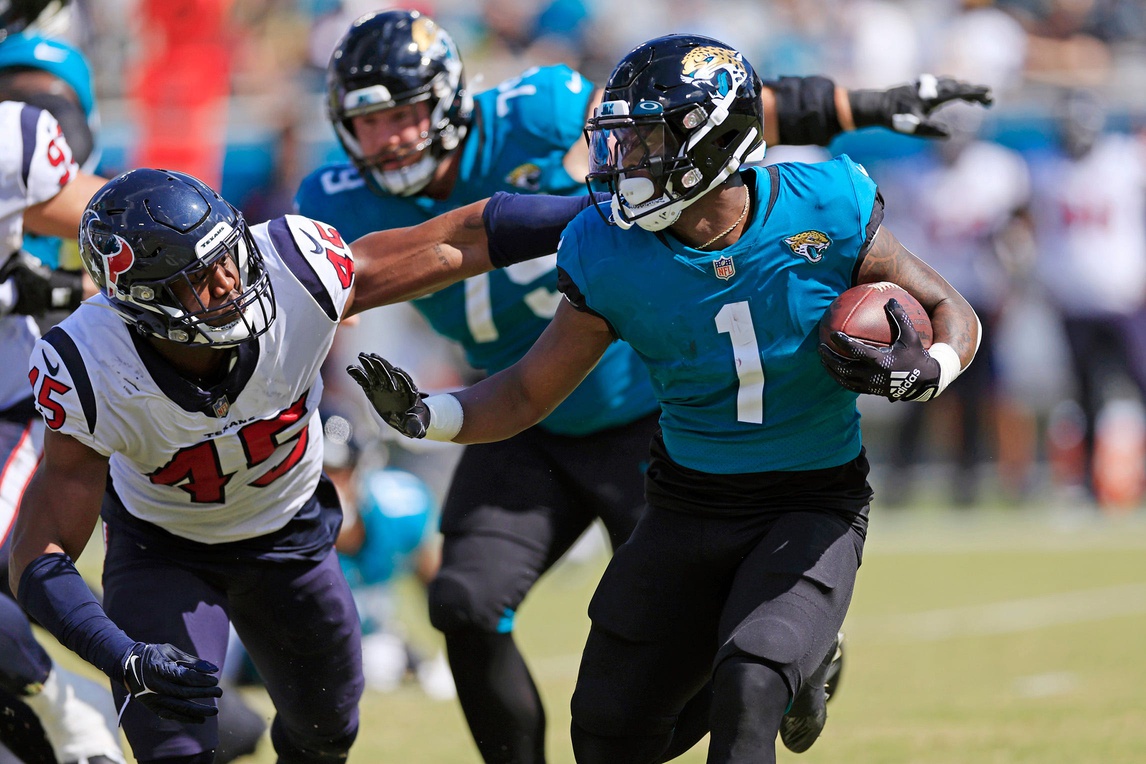 For the first few weeks of the 2022 NFL season, all eyes in Jacksonville were on Jaguars quarterback Trevor Lawrence as many looked to see if the “generational” talent would improve in year two. But after a solid start, Lawrence has struggled in his last couple of games, leaving room for another former Clemson star in his second year to garner more attention: running back Travis Etienne.

Etienne lost his entire rookie season before it even began when he suffered a serious Lisfranc injury in the Jaguars’ second preseason game last year. So going into this year, it was hard to know what to expect from him after a full year out recovering, especially after he had worked out as a receiver—not a running back—when he did play last preseason.

Another thing that made Etienne’s potential contributions in year two unpredictable was the Jaguars’ running back situation seemingly being figured out already. James Robinson, an undrafted free agent pickup in 2020, was a dominant force in his first two years in the league. By the time Etienne finally made his pro debut, the incumbent Robinson already had 2,403 yards from scrimmage and 18 touchdowns while averaging five yards per touch. How much could Etienne really be able to contribute?

After three weeks of the season, the answer seemed to be: “not much.” Robinson was very clearly still the lead back in Jacksonville with most of the carries and production from the running game going through him. In the Jaguars’ first three games, it was Robinson who had scored three touchdowns and recorded his first 100-yard game of the season. The good vision, explosiveness, and toughness that he ran with throughout his first two years were on full display in all three games. Etienne, on the other hand, had barely 100 rushing yards total, no touchdowns, and almost as much receiving production as he had rushing.

Things have started to flip the other way in more recent weeks. In both Weeks 4 and 5, Robinson and Etienne had the same number of carries—eight and 10, respectively—and it was actually Etienne who was more productive. On his last 18 carries, Robinson has struggled to break off big runs, more often getting stuffed in the backfield, slowed up within five yards of the line of scrimmage, and even fumbling for the first time this season against the Philadelphia Eagles. It was more of the same against the Houston Texans.

In contrast, Etienne took off with his first handoff on Sunday, gaining 18 yards to pull the Jaguars out of the shadow of their own end zone. On the very next play, the second-year back took his second carry of the day for 30 yards to put Jacksonville in Texans territory. Both plays showed off what Etienne brings to the table with good vision and footwork to find cutback lanes from his blockers and execute said cutbacks without losing momentum. Once he reaches the open field, he turns on the jets to extend yardage.

This was back-to-back plays were Etienne displayed great patience and vision to find these cut back lanes and shows of his burst.

Plays like this is why he was a first round pick, it may have taken a few weeks but he is coming folks. #FantasyFootball pic.twitter.com/AURBbaXlOI

For whatever reason, head coach and offensive play-caller Doug Pederson didn’t continue to take advantage of Etienne’s potential breakout and threw the ball more often for the rest of the game in an eventual Jaguars loss. But Etienne’s abilities early on were plain to see, and he should get more chances to show them off going forward.

Robinson obviously hasn’t lost his talent suddenly in the last two weeks. There are still flashes of those tough, productive runs he’s always had, but the overall production hasn’t been there recently. Etienne has really been turning things on after a few quiet weeks to begin his professional career. If Robinson continues to struggle with his production ahead of a surging Etienne, the second-year rusher could take over as the lead back in Jacksonville sooner rather than later.