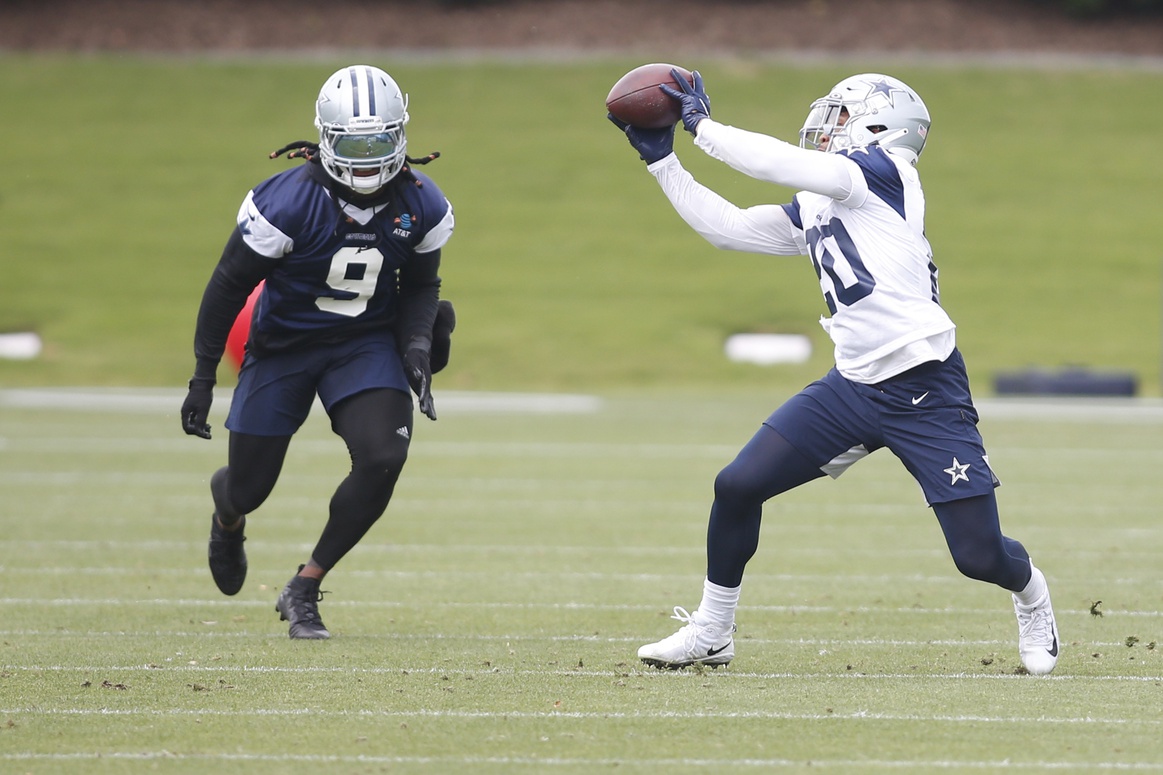 The Dallas Cowboys must find ways to get running back Tony Pollard more involved in 2022. Pollard is expected to continue playing second fiddle at running back behind Ezekiel Elliott throughout the impending season. Offensive coordinator Kellen Moore should be searching for ways to get Pollard more involved in his offense. Pollard recently discussed the possibility of playing more wide receiver. It could represent an excellent opportunity for Dallas to appropriately utilize Pollard’s game-changing skill set.

“I’m open to anything just being on the field, being able to make the most of my opportunities,” Pollard said following organized team activities (OTAs) on Thursday, via the Dallas Morning News. “If I have to line up in the slot a little more, whatever it takes, I’m ready to do it.”

Pollard experienced a fruitful campaign in 2021. The former Memphis standout recorded career-highs in rushing attempts (130), rushing yards (719), and yards per carry (5.5). It’s worth noting that Elliott struggled to play through a knee injury last season but now finds himself fully healthy and ready to reclaim his starring role in Dallas’ backfield. Pollard’s carries could take a step backward as a result. Pollard also recorded career-bests in receptions (39), receiving yards (337), and yards per reception (8.6) last season. With a seemingly healthy Elliott back in the fold, Pollard’s best bet to feature in Dallas’ offense should come via the passing game.

Looking past the developing dynamic involving Pollard and Elliott in Dallas’ backfield, the departures Dallas experienced at receiver this offseason represent another reason why Pollard should line up at receiver with greater frequency in 2022. The Cowboys traded away superstar receiver Amari Cooper to the Cleveland Browns due to salary-cap-related difficulties. Fellow receiver Cedrick Wilson Jr. signed with the Miami Dolphins. Michael Gallup ultimately re-signed with the Cowboys but continues to recover from a Week 17 torn ACL injury. It means the Cowboys could enter the early portion of the 2022 regular season with CeeDee Lamb and not much else in terms of proven commodities at receiver. Affording Pollard more opportunities via the passing game could help offset the departures of Cooper and Wilson, especially while Gallup continues getting up to speed.

Playing receiver wouldn’t be a new development for Pollard. At Memphis, the Tennessee native routinely split out wide and was utilized as a pass-catcher. Pollard totaled 104 receptions across three collegiate seasons and actually recorded more career receiving yards (1,292) than rushing yards (941) while matching his touchdown totals (nine apiece as a receiver and ball carrier).

Pollard is entering a crucial campaign in 2022. A former fourth-round selection (No. 128 overall) in the 2019 NFL Draft, Pollard is expected to play out the fourth and final season of his initial four-year rookie contract. Pollard will earn a base salary of $965,000 in 2022, via Spotrac. It represents a bargain for the Cowboys. Should Pollard manage to establish himself as a consistent weapon for the Cowboys’ offense this season while successfully building upon the momentum he captured last season, he will be due a sizable raise in pay heading into 2023 and beyond, adding another layer to what promises to be a difficult offseason for Jerry Jones and the Cowboys.

Pollard’s usage and success rate could have a direct impact on Elliott’s future with the Cowboys. It’s already been well documented that Elliott is entering the fourth year of a six-year, $90 million extension signed with the Cowboys in September of 2019. Elliott has struggled to maintain health and overall effectiveness since signing that staggering extension, and the two-time rushing champion won’t have any more guaranteed money remaining on his contract following the conclusion of the 2022 campaign. Pollard could help the Cowboys make their decision on Elliott, especially if he proves to be a legitimate pass-catching weapon in a league that is placing increased emphasis on rostering running backs that can run routes and take part in a pass-happy offense.

An argument that pits Tony Pollard against Elliott isn’t necessarily new. Pollard outgained Elliott 7.05 to 5.15 on a yards-per-touch basis throughout 2021, a fact that’s often brought up by Elliott’s denouncers. Pollard’s usage, snap totals and target share will be closely monitored throughout the 2022 campaign. Establishing himself as a full-time weapon that can play three positions (he’s also an excellent kick returner that averaged 28.8 yards per kick return last season) would do wonders to Pollard’s overall reputation within Dallas’ building. It could also help him land a long-term payday in Dallas while impacting Elliott’s future as a Cowboy.