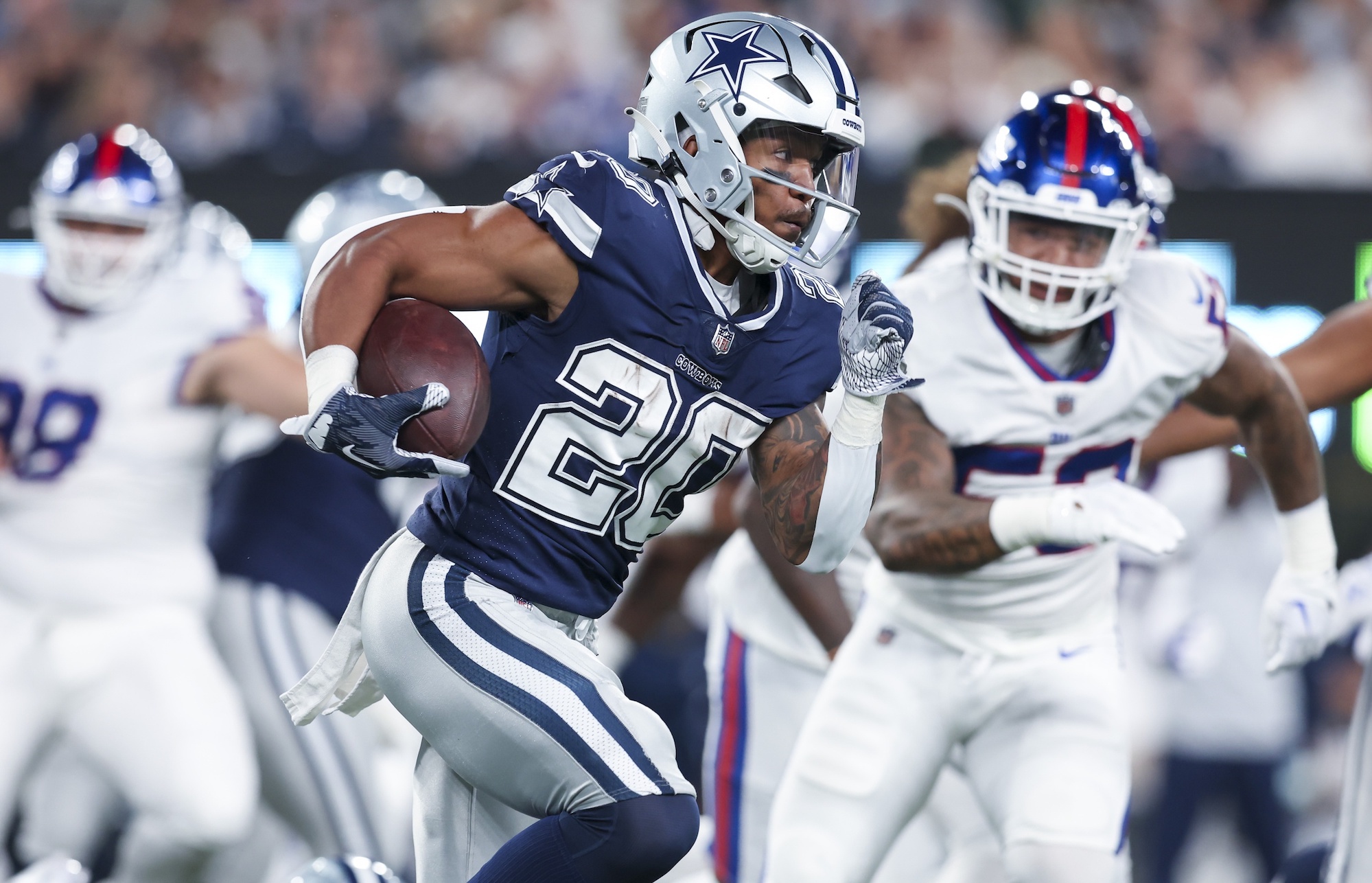 How Much Will Tony Pollard’s Next Contract Be Worth?

The Dallas Cowboys secured a much-needed 23-16 victory over the New York Giants on Monday Night Football. The triumph over their rival Giants catapults the surging Cowboys to second place in the NFC East following back-to-back wins. Cowboys running back Tony Pollard was electric throughout the contest. Pollard finished with 105 rushing yards via 13 carries (8.1 yards per carry). Pollard’s 46-yard second-quarter rush was a game-changer. The Cowboys must begin discussing a contract extension with Pollard’s representation.

The No. 128th overall selection in the 2019 NFL Draft, Pollard finds himself in the midst of an ever-important contract year. Pollard is severely underpaid as a mid-round draft pick. The former Memphis standout is currently earning a base salary of $965,000 while carrying a cap charge of $1.131 million, via Spotrac. There’s no denying Pollard is due for a sizable contract extension this coming offseason.

Pollard’s next contract will largely be dictated by the running back market. The 2021 offseason didn’t welcome many sizable contracts for running backs. Leonard Fournette and James Conner were the top earners via identical three-year, $21 million extensions. Fournette entered negotiations with multiple 1,000-yard campaigns under his belt and Conner scored 15 touchdowns in 2021. Pollard has never served as a lead ball-carrier. He continues to play behind or alongside Ezekiel Elliott, which will undeniably impact his asking price.

Chase Edmonds trailed both Fournette and Conner, and the two-year, $12.1 million contract Edmonds signed with the Dolphins in free agency serves as a comparable example for several reasons. Both Edmonds and Pollard have spent the majority of their careers in two-man backfields. Edmonds entered free agency after totaling 903 yards as both a rusher and pass-catcher with Arizona in 2021. Pollard was utilized in a similar manner by the Cowboys last season, totaling 1,056 yards (719 rushing, 337 receiving). It should place Pollard on track for a three-year extension worth something in the neighborhood of $19.5 million ($6.5 million annually).

It’s also worth acknowledging Pollard’s 2021 numbers were boosted by Elliott’s injury. Elliott remains a big part of Dallas’ offensive plans, but Pollard is firmly in the mix, too. Following Monday’s eye-opening performance, Pollard is currently on pace to record a career-high 1,275 total yards when extrapolating his current statistics throughout the course of a 17-game season. Pollard may command a slightly higher amount if he reaches those heights, but it’s difficult to envision Pollard earning more than $7.5 million annually on a two-to-three-year extension.

The Cowboys’ salary cap situation looms large in relation to Pollard’s future. The Cowboys are currently projected to enter next offseason with approximately $9.2 million in cap space, according to Spotrac’s top 51 calculator. The Cowboys possess several starting and key role players who are heading for unrestricted free agency. That list includes Dalton Schultz, Noah Brown, Terence Steele, and Connor McGovern, in addition to Pollard.

The Cowboys have several difficult financial decisions to make. None will impact Pollard quite like Elliott. The Cowboys can finally rid themselves of the monstrous, ill-advised six-year, $90 million extension Elliott signed in 2019 this coming offseason. Elliott will have received the majority of the guaranteed money included in that extension at the conclusion of the current campaign. Elliott’s dead cap hit drops from an unreasonable amount ($30-plus million) to a more manageable $11 million as a result, and the Cowboys can actually save cap space by releasing/trading Elliott. It’s extremely unlikely that both Pollard and Elliott are Cowboys in 2023.

Pollard is a difference-making offensive weapon. His upside remains high despite Dallas utilizing him in a rotational role. Pollard will continue making impact plays in 2023 and beyond. Whether they occur in Dallas or elsewhere remains to be seen.