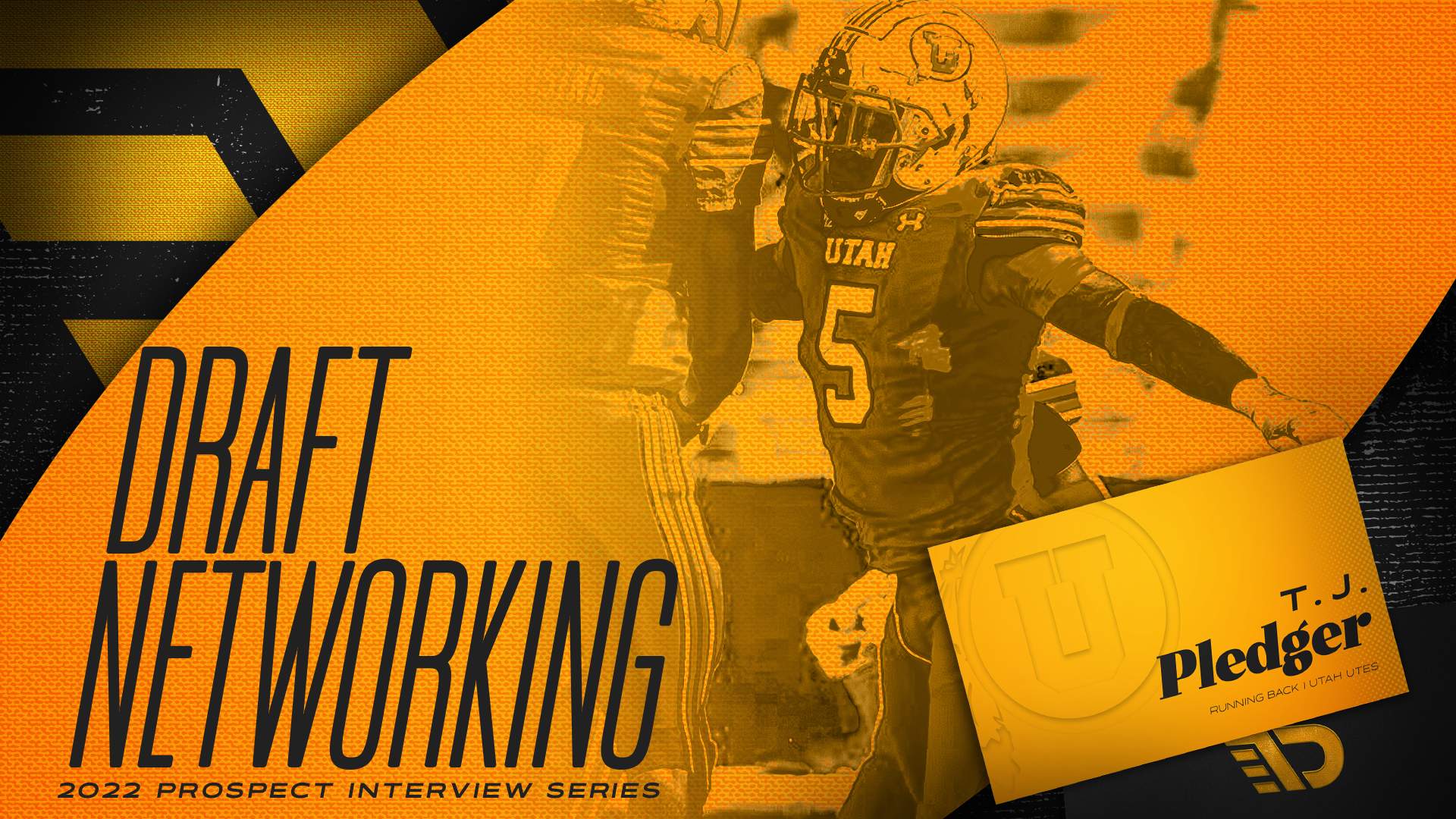 Utah's TJ Pledger enjoyed a quality season in 2021 after transferring into the program from the Oklahoma Sooners. Pledger served as a dual-threat running back that accounted for more than 800 yards of total offense while playing both as a ball-carrier and as a pass-catcher. Pledger now enters the 2022 NFL Draft as a particularly intriguing sleeper that could boost a team's running back room on day three. Pledger recently spoke exclusively with The Draft Network about his decision to transfer from Oklahoma to Utah, the experiences of playing for two prolific coaches in Lincoln Riley and Kyle Whittingham, being the owner of the longest rushing touchdown from scrimmage in Utah's illustrious history, versatility at the running back position, and so much more. JM: You enjoyed a nice season in 2021 by accounting for 801 all-purpose yards. How do you reflect on your lone season at Utah? TJP: I feel extremely thankful and blessed to have been presented with such an opportunity. I made the most of my true senior season. I feel like I put together a consistent season while showcasing what I’m capable of to the NFL teams that followed my progress throughout the course of the season. It was the perfect follow-up to what I achieved at Oklahoma. I had a great season in my opinion. Utah made me a better man and a better football player. JM: I want to expand on that. Now that you’ve had some to reflect, how do you look back on the decision to transfer from Oklahoma to Utah? TJP: I think it was a great decision in the long run. It was the right decision for me. I played in a completely different system at Utah than I did at Oklahoma. That experience expanded my horizons and made me a more complete football player. I put some great things on film. I proved to the scouts that I can run downhill and catch passes. I showcased that sort of versatility. I’m extremely happy that I decided to transfer to Utah. JM: You have to take me through your 96-yard rushing touchdown against Stanford. It’s the longest rush from scrimmage in Utah history. What an electric play. https://twitter.com/CFBONFOX/status/1456832352886403072 TJP: I think it was my second carry of the game. I was still getting loose out there. My offensive line did an excellent job on the play creating a lane for me to run through. My wide receivers were competitive and executed their blocking assignments. That left me with a one-on-one opportunity against a safety in the open field. I hit him with a stiff arm and I was off to the races (laughs). It was definitely a great play, one of my favorite plays that occurred during my collegiate career. JM: It was a great play. You touched on playing in two different systems. You played for both Lincoln Riley and Kyle Whittingham, who are two of the best coaches in all of college football. How do their coaching styles differ from one another? TJP: They’re both player coaches and down-to-earth guys. They really care about their players. The way they run their team, I would probably say it was a little different. Coach Riley is a bit younger and he’s his own offensive coordinator as well, so he was a bit more hands-on with his offensive skill players just because he was the one calling the plays. Coach Whittingham is a fantastic coach, too. He does a great job organizing the team and pushing us to new levels. They’re both great guys and coaches to be around. I’m so blessed to say I played for two elite coaches. JM: You really were. What’s the biggest lesson coach Riley or coach Whittingham taught you? TJP: Coach Whittingham was always preaching for us to take advantage of our opportunities. He told us to stay ready so we didn’t have to get ready. We always knew our number was going to be called at some point. Coach Riley was always full of great advice. He taught me how to be confident and how to play loose. He told me to be myself when the lights come on. That’s something that stuck with me. Coach Riley loved pumping us up the night before the game. He always wanted us to play loose. When it’s time to make plays, don’t stress about it, just go make the play. Big-time players make big-time plays. Coach Riley always said that. That’s what he expected from us. He set the standard. I made a lot of explosive plays because I had the trust and confidence of both coach Riley and coach Whittingham. JM: That’s some great advice. You caught 10 passes in 2021. You touched on your pass-catching ability earlier. Talk to me about the importance of catching the ball as a running back in today’s game. TJP: Man, it’s everything. That’s the best way for me to put it. That’s where the league is headed. Teams are always searching for running backs that are three-down players. You have to be able to take advantage by creating mismatches against linebackers in coverage. That’s what offensive coordinators want. Catching the ball is all the rage for running backs in today’s game. You’ve seen the way the league has transformed. Every running back can catch the ball now. It’s a big part of the game now. You better be able to catch the ball. JM: That’s the honest truth. I’ve really appreciated your time today. In closing, why should a team use one of their draft picks on T.J. Pledger? TJP: A team should draft TJ Pledger because I’m one of the most electric running backs in this draft class. I’m extremely versatile. I can run downhill, catch the ball out of the backfield and play in pass protection. When you draft me, you’re going to get a healthy player with no mileage on his body. I’m very explosive. I’m a smart player that’s played in two different systems for the two best coaches in college football.