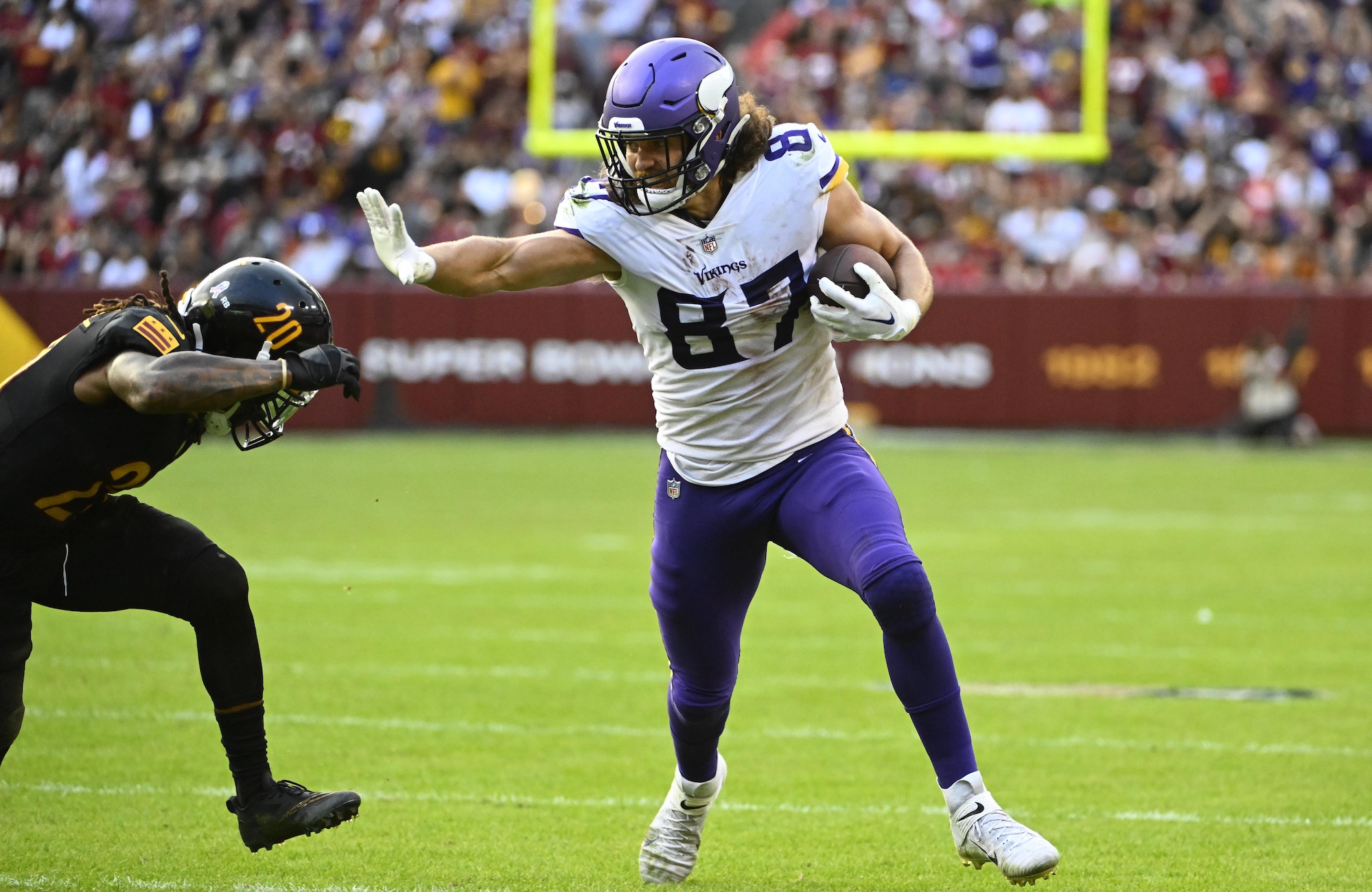 TJ Hockenson Already Showing How He Can Elevate Vikings’ Offense

Last week, the Minnesota Vikings agreed to a surprising trade with their inter-divisional counterpart the Detroit Lions for tight end T.J. Hockenson. The former top-10 draft pick from 2019 was a clear upgrade over the now-injured Irv Smith Jr. Hockenson’s ability to work the short, intermediate, and deeper areas in the middle of the field are what sets him apart.

Head coach Kevin O’Connell walked into the matchup with the Washington Commanders with the chance to deploy his new weapon at tight end. Hockenson being on the same offense as Dalvin Cook and Justin Jefferson makes it difficult for opposing defenses to key on him. The route concepts, personnel packages, and alignments designed by O’Connell do not afford favorable opportunities for defenses to play heavy man coverages.

In his first action as a Viking, Hockenson had his third-best statistical game of the season. He caught all nine of his targets for 70 yards. He was productive and aligned in multiple spots. This game was a good showcase to gain insight into the ways he can help this offense and passing attack. I appreciate the conscious effort by O’Connell and Kirk Cousins to feature Hockenson in his first game with the team.

Hockenson saw snaps in-line, in the slot, and out wide. This removed the predictability defenses look for to key on. I saw a nice mixture of zone and man coverage from the Commanders’ defense. As a result, Hockenson took advantage of each look. The tight end was mostly tasked with working in the middle of the field and between the hashes. His speed and ability to stress defenses vertically allowed those in-breaking routes to become available. In some instances, versus man coverage, Hockenson attacked the deep safety with speed, never detailing where his route would take him before finding open space between the hashes. O’Connell did a good job mixing up his alignment, forcing defenders to play him honestly and not allow them to get hands on Hockenson to re-route.

Creating advantageous matchups and opportunities allowed Hockenson to showcase his route-running prowess. He was able to showcase the ability to overtake a defender’s leverage and find open passing lanes for Cousins. Don’t forget about his play strength either, as they used him as a chip/release option to help block before releasing quickly into his route.

TJ Hockenson’s first catch as a Viking is a first down pic.twitter.com/m6p0FY3bbO

Hockenson made a few tightly-contested catches with a defender right in his hip pocket. He worked as a slice blocker off the split-zone play action, leading him into the flats on passing plays. Add in the clear-out concepts and the Vikings created some manufactured and open looks for Hockenson to settle into.

All in all, this was a good start to his career as a Viking. O’Connell created isolated opportunities to feed Hockenson the football and it worked. Whether working the middle of the field or outside the hashes, Hockenson’s role can take this offense to another level and make Cousins’ job a lot easier. I am excited to see how the route tree continues to evolve for Hockenson with his catch radius and athleticism.