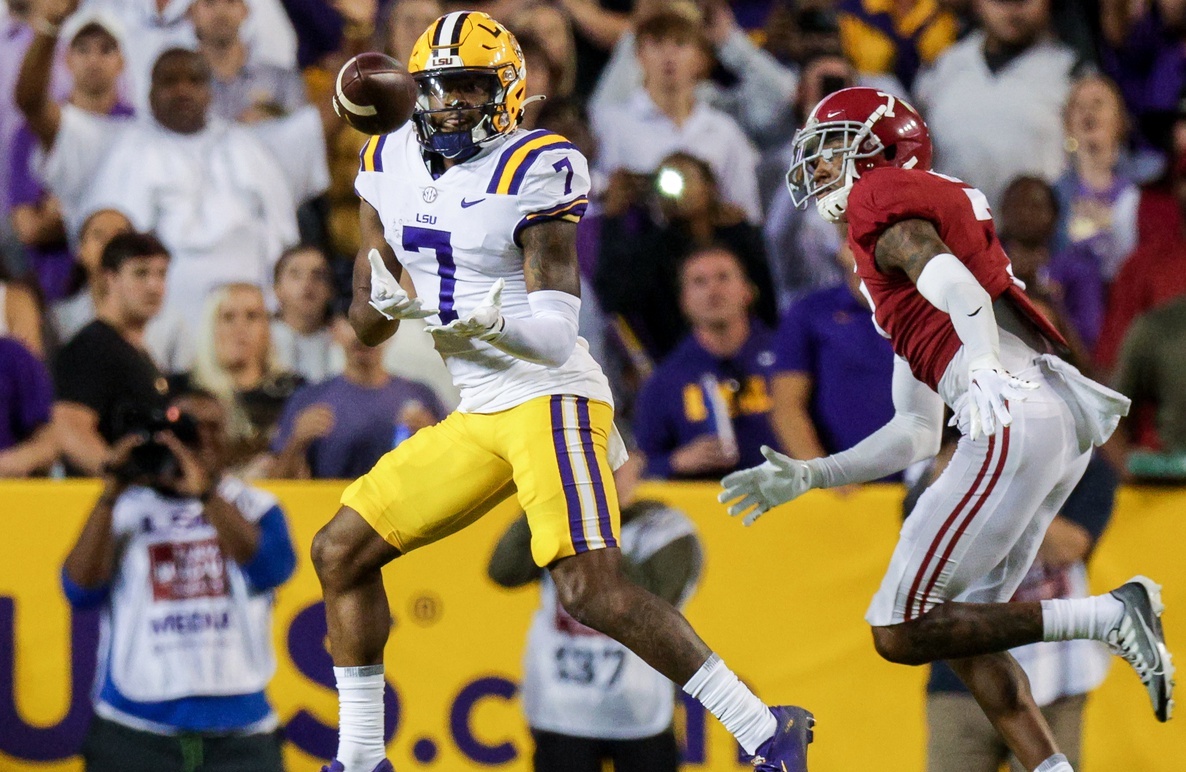 3 WRs Titans Fans Should Know About In 2023 NFL Draft

One thing about the Tennessee Titans that has become quite evident this season is their glaring lack of dynamic, pass-catching playmakers. While it’s true that the Titans’ offense has long run through running back Derrick Henry, the inability to move the ball in the air will keep their offense one-dimensional and could prevent them from going far in the playoffs.

Trading away an elite receiver like A.J. Brown was always going to hurt them in that regard, and losing quarterback Ryan Tannehill and rookies Treylon Burks and Kyle Philips to injuries have held them back even more. Through eight games, only one (1!) Tennessee pass-catcher has more than 150 yards. No other team has been that pitiful in the passing game. Even the Chicago Bears and Atlanta Falcons, who are running the ball on nearly sixty percent of their offensive plays, have several players over that threshold.

For the Titans, that sole receiver is 30-year-old Robert Woods, who has 256 receiving yards and is one year removed from ACL reconstruction surgery. Woods is a solid receiver and a good addition to the Titans’ offense as not only a receiver but a blocker in the run game as well, but he simply is nowhere near as dynamic a receiver as someone like Brown.

Tennessee’s 5-3 record so far is a testament to just how good Henry and the Titans’ defense has been. Imagine how good they could be if they were able to move the ball in the passing game! It behooves the Titans to add at least one more dynamic receiver to their offense in next year’s draft. Here are a few names they should keep an eye on until then, keeping in mind their first-round selection will likely end up toward the back end of the round.

Kayshon Boutte has had a hard time getting things going this year, and it’s hard to blame him given the fact he’s coming off of a serious ankle injury and is playing with a new quarterback under a new head coach. But his relative lack of production this year does not mean he isn’t the same dynamic playmaker that lit opposing defenses up as one of LSU’s lead receivers in the two years prior.

Boutte is explosive and shows that trait both before and after the catch. He can create spacing downfield before he gets the ball in his hands, but he really shines in his abilities after he makes a catch. He’s similar to another former LSU receiver, Ja’Marr Chase, in how he can turn short passes over the middle into home run plays because of how he’s able to make defenders miss in the open field and break through arm tackles with his strength. Any time Boutte is on the field, he’s a big-play threat, and that’s exactly the kind of receiver the Titans could use.

TO TAKE THE LEAD…

Rashee Rice might just be the best college wide receiver you haven’t heard of… yet. Coming from a Group of Five school like SMU, Rice doesn’t get as much attention as some of the big names from Power Five schools. That doesn’t make him any less worthy of being a first-round pick.

He’s currently the only FBS receiver with more than 1,000 receiving yards through nine games. Rice’s acceleration and speed allow him to get open downfield, and the lackluster quarterback play he’s gotten this year has actually allowed him to put his body control and ball skills on display. Rice is a contested-catch monster thanks to those skills and his 6-foot-3 frame and has plenty of yards-after-catch potential as well with his ability to make defenders miss. He has all of the potential to be an impactful No. 1 receiver wherever he ends up, so the Titans should be paying attention.

SMU WR Rashee Rice can do plenty of damage after the catch with his contact balance and abilities to shed tacklers due to his sturdy 6-2, 203 lb frame. #NFLDraft pic.twitter.com/tPSdZD3xit

SMU WR Rashee Rice is difficult to defend with his size and ball-skills. #NFLDraft pic.twitter.com/UQS1A6KZxb

The Titans may have just drafted a small slot receiver in Philips, but Zay Flowers is the kind of dynamic playmaker that could bring his new team everything that Philips does and more. The lead receiver for the Eagles this season, Flowers has dominated opponents all year with top-end speed and incredible playmaking ability.

Pairing his speed with good route-running, the receiver creates separation easily to stretch the field in both horizontal and vertical directions. Once he gets the ball in his hands, watch out! Flowers’ yards-after-catch ability with great elusiveness downfield only makes him a bigger threat for home-run plays.

The speed. The spin. The score.