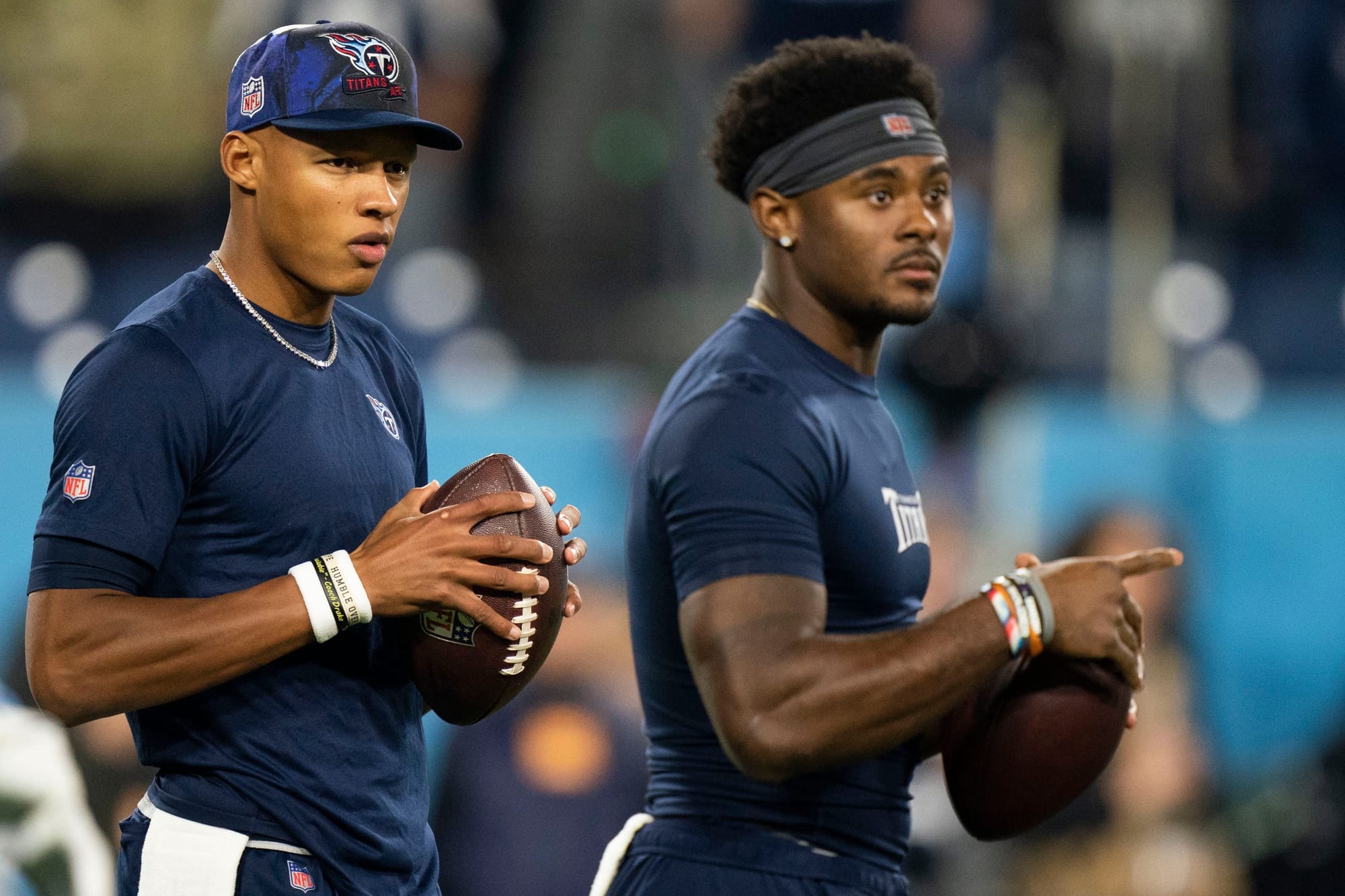 Who Should Titans Start At QB In Week 18?

The Tennessee Titans shocked many around the NFL by starting veteran journeymen quarterback Josh Dobbs against the Dallas Cowboys on Thursday night. Dobbs replaced rookie signal-caller Malik Willis, who struggled in last weekend’s lowly loss to the Houston Texans. Dobbs impressed primetime viewers by completing 20-of-39 passing attempts for 232 yards, one touchdown, and one interception in his first career start.

Dobbs threw his lone touchdown to veteran receiver Robert Woods in the third quarter. Dobbs hung tough in the pocket, appeared unphased, and found a wide-open Woods underneath the coverage. The score brought Tennessee within four points heading into the final quarter.

Dobbs’ encouraging performance provides the Titans’ coaching staff with a conundrum. Their Week 18 regular-season finale against the Jacksonville Jaguars will decide the AFC South’s division title, a playoff berth, and the right to host a postseason contest. Which quarterback should the Titans start against the Jaguars? Dobbs is the correct answer.

Starting quarterback Ryan Tannehill was placed on IR on Thursday after recently undergoing ankle surgery. The Titans rested several starters against the Cowboys on Thursday as the outcome of the game didn’t impact Tennessee’s playoff hopes. But there was a strong indication that replacing Willis with Dobbs was about more than protecting Willis from injury. It felt like an audition for Dobbs as the Titans attempted to find out which quarterback gives them the best chance of beating Jacksonville in Week 18.

Tennessee’s coaching staff will almost certainly allow Dobbs to make a second consecutive start. Willis has started three contests for the Titans this season. He’s yet to surpass 100 passing yards in a single showing, which unfortunately places him among historically bad company. Willis has completed just 50.8% of his passing attempts and hasn’t thrown a touchdown. Tennessee’s lackluster supporting cast hasn’t done Willis any favors, but the former Liberty quarterback, who was a raw product coming out of school, doesn’t currently look capable of leading a successful NFL offense.

Dobbs arrived in Tennessee off the Cleveland Browns’ practice squad on Dec. 21. Dobbs showcased terrific command of the offense considering he’s been in Nashville for less than two weeks. Dobbs was poised and efficient. He looked like a legitimate backup quarterback, which is more than you can say about Willis right now. An additional 10 days of practice and mini-bye could have Dobbs looking more comfortable in their Jan. 8 finale.

Dobbs’ single-passing-game total (232) nearly surpassed Willis’ totals (276) in seven regular-season appearances. The Titans gained 317 total yards of offense against the Cowboys. It’s plausible to believe Dobbs can oversee a decent offense that’s capable of scoring 20-plus points with superstar running back Derrick Henry, who didn’t play Thursday, sharing a backfield with him.

Dobbs was more willing to test tight-throwing windows than Willis has been. He played loose and free. Dobbs routinely attempted deep-developing passes, even connecting with Racey McMath for a 39-yard gain.

Dobbs wasn’t perfect. He threw a fourth-quarter interception and fumbled twice, losing one. Tennessee’s receivers were also credited with three drops, two of which occurred on third down and forced ensuing punts. All parties involved looked considerably more comfortable with Dobbs at the helm, however.

The 7-9 Titans have lost six consecutive contests largely due to untimely late-season injuries to various starters on both sides of the ball. They possess a last-ditch opportunity to rescue their dwindling campaign against the Jaguars in Week 18. Dobbs gives them the best chance to do so.