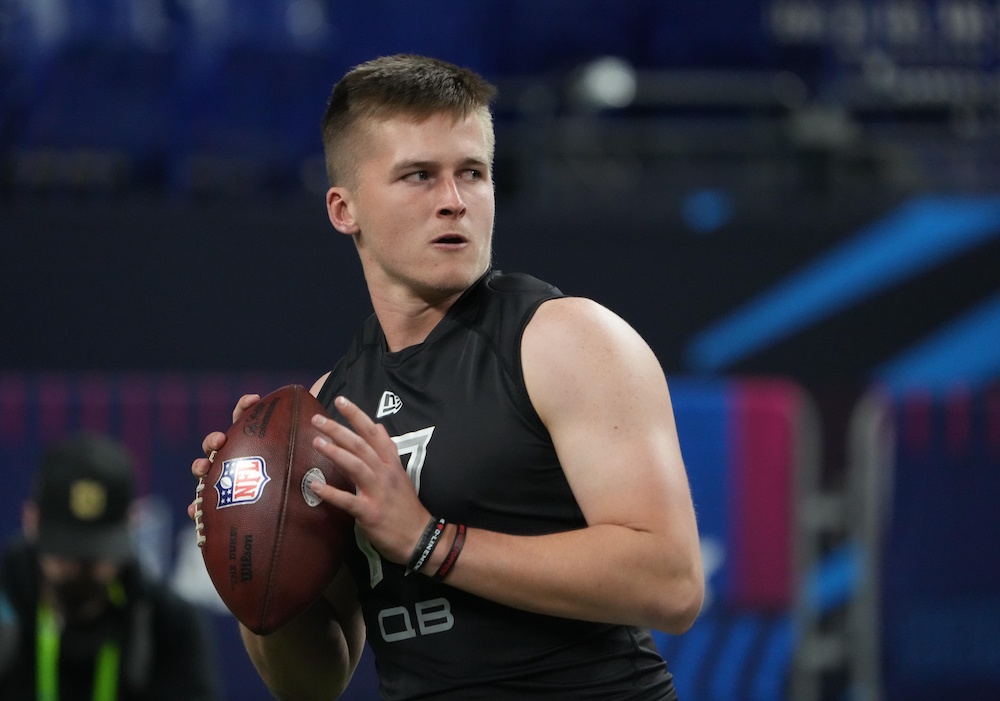 The Tennessee Titans possess some level of intrigue in drafting a quarterback in the 2022 NFL Draft. All indications point to that being the case. Head Coach Mike Vrabel and quarterbacks coach Pat O’Hara attended Cincinnati’s Pro Day in order to get up-close-and-personal with quarterback prospect Desmond Ridder. Bearcats Head Coach Luke Fickell has a personal relationship with Vrabel after serving as the best man at his wedding and the Titans have done their homework on Ridder. O’Hara was previously joined by Offensive Coordinator Todd Downing at North Carolina’s Pro Day, where prospect Sam Howell enjoyed a fruitful throwing session. Downing also attended the Pro Day of Ole Miss’ Matt Corral, who threw the ball well in front of a jam-packed crowd.

The Titans are clearly doing their due diligence on the quarterback class as they approach April’s draft. Starting quarterback Ryan Tannehill is currently an unpopular figure in the city of Nashville following his three-interception performance in the team’s divisional round postseason loss to the Cincinnati Bengals. Given the state of Tannehill’s contract and Tennessee’s strong roster, it would qualify as a surprise if the team drafted a quarterback in the first round. Robinson and the remainder of Tennessee’s brass have shown interest in several quarterbacks throughout the process, including ones that are expected to be selected in the later rounds. Robinson previously drafted former Washington State quarterback Luke Falk in the sixth-round of the 2018 NFL Draft and former Hawaii quarterback Cole McDonald in the seventh-round of the 2020 NFL Draft. It’s fair to say he’s a fan of taking a late-round flier on a high-upside signal-caller.

These two mid-to-late round signal-callers have also garnered interest from Tennessee, and make for particularly intriguing candidates.

Titans Vice President of Player Personnel Ryan Cowden was present for Bailey Zappe’s Pro Day on Thursday morning, per Jim Nagy, and the team also interviewed Zappe during January’s Senior Bowl. A transfer from Houston Baptist to Western Kentucky ahead of his 2021 senior campaign, Zappe set the world of college football on fire by throwing for 5,967 yards and a staggering 62 touchdowns in 14 appearances while flawlessly operating Western Kentucky’s pass-happy offense. Zappe’s steady performances helped him capture the Most Valuable Player award in the Conference USA.

Zappe spent the majority of his time in college in shotgun formation as opposed to playing under center and will face an acclimation period at the next level, as a result. Zappe has poured a ton of energy into working on his abilities under center with acclaimed quarterbacks coach David Morris at QB Country in Mobile, Alabama throughout the pre-draft process. A decisive and accurate quarterback that’s comfortable working through his progressions, Zappe is a poised signal-caller that reads defenses at a high level. Zappe is a rhythm thrower that intrigues the Titans and he’s one of the most exciting mid-round quarterbacks in the class.

Zappe joined TDN for an exclusive interview in March.

The Titans were the only NFL team to attend Alabama A&M’s Pro Day, per the representation of a fellow participant. It’s possible the Titans were in attendance to watch wide receiver/tight end Dee Anderson, who formerly attended LSU and Oklahoma State, but given their noted interest in quarterbacks throughout this process, watching Aqeel Glass was more likely the reason for their visit.

A decorated multi-year starter for the Bulldogs program, Glass was electric all throughout the 2021 campaign. The St. Louis, Missouri native threw for 3,568 yards and a career-high 36 touchdown passes. Glass completed a personal-best 62.6% of his passing attempts while matching a previously set career-high in yards per attempt (8.6). Glass was awarded with his second consecutive Black College Football Player of the Year award (the Deacon Jones Trophy) for his efforts. Glass was invited to the NFLPA Collegiate Bowl in January, where he completed nine-of-11 passing attempts for 141 yards. Glass may find himself in undrafted territory in April, but he certainly caught Tennessee’s attention following a solid Pro Day performance.