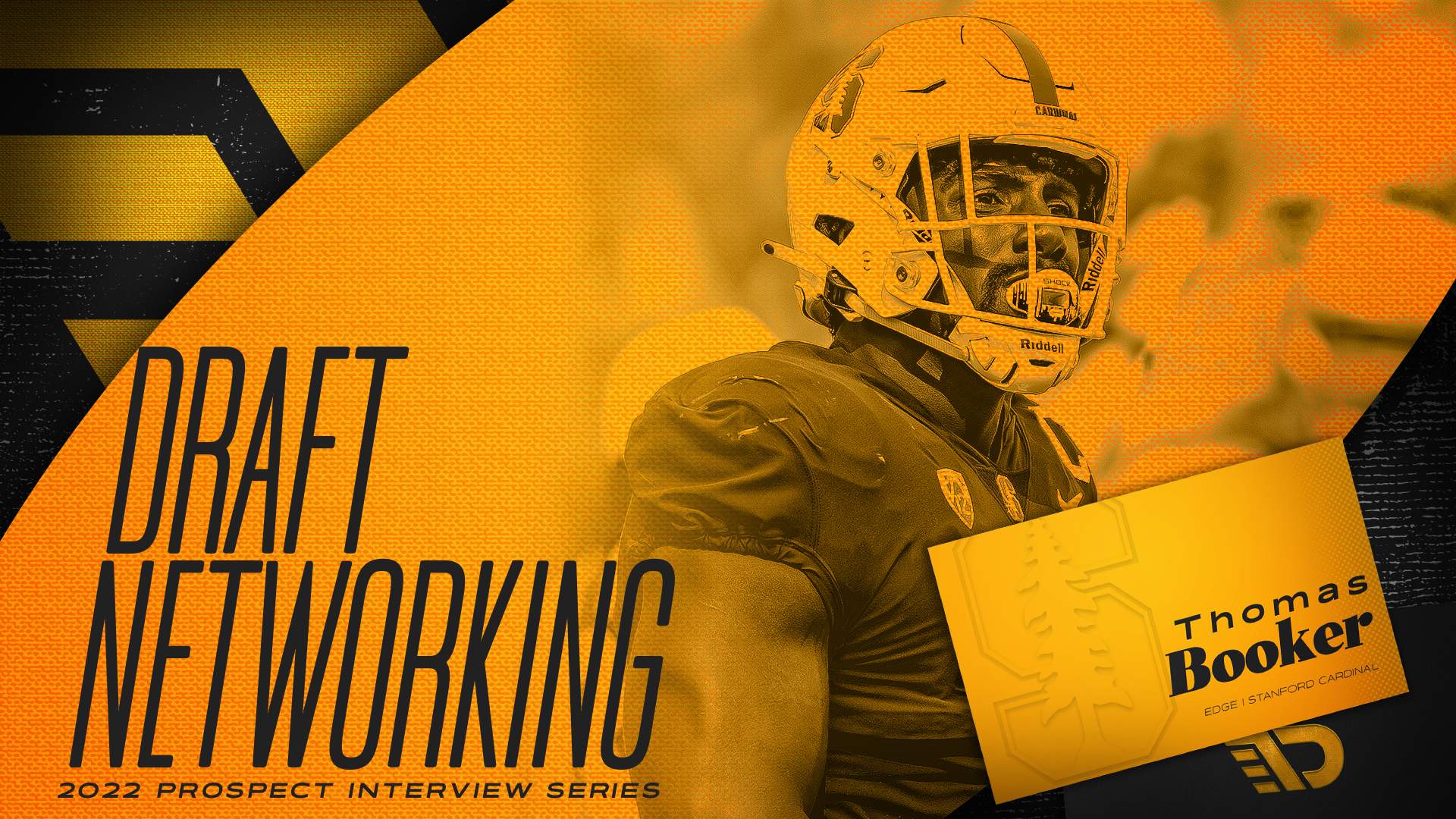 Stanford’s Thomas Booker is an incredibly impressive athlete with a high ceiling. The 6-foot-3, 301-pound Booker was one of the more athletic defensive linemen in attendance at the NFL Scouting Combine.

Booker ran a blazing 4.95 in the 40-yard dash. It represents a terrific result for a defensive lineman that tipped the scales over 300 pounds. Booker later ran the three-cone drill in 7.33 seconds, and leaped a 110-inch broad jump. Booker shouldn’t be flying under the radar. He’s a supreme athlete and an ascending talent.

Booker recently spoke exclusively with The Draft Network regarding his impressive four-year career at Stanford, his pass-rush arsenal, which teams have shown interest in him throughout the process, his excellent performance at the combine, and so much more.

JM: You played a successful four seasons at Stanford. There’s no denying that. How do you think your time as a Cardinal helped prepare you for the next level?

TB: I think what they did to prepare me was huge. We’re obviously a very intellectual school and I think that translated over to the football program. That was one of the biggest things for me in my opinion. We’re big on understanding why we do things. We understand the “why” behind our scheme and techniques. That approach helped me have a more holistic knowledge of my position and football as a whole. I understand situational football. I understand where everybody else is supposed to be. Those things help me play faster. That’s one thing.

From a positional standpoint, I was asked to play multiple positions across our defensive line. I played the 0-technique, I played the nose tackle position. I also played as a five-technique all the way on the outside. It helped make me an extremely versatile player throughout my time at Stanford. The versatility, paired with the fact that I had to really have a complete grasp of our defense has helped me better understand what teams are looking for at the next level. I also have a high-level understanding of offensive line techniques.

All of that is going to be super helpful for me going forward. Scheme and positional versatility is one of my biggest strengths and assets.  The fact that I can play at so many different spots sets me apart in this draft.

JM: You bring me to my next question. You were so versatile. Stanford lined you up all over the formation, as you said. You played every position ranging from the 0-technique to the 9-technique. I imagine versatility is a word that teams are bringing up throughout their meetings with you. How did you handle all of those roles?

TB: They absolutely are. I had to minimize it and break it down. For example, a lot of the shaded techniques are going to be played the same. One-technique, three-technique, five-technique, the nine and seven, all of that helps me narrow it down. There are specific requirements and wants at every position. Obviously, stuff happens a lot quicker at the one-technique compared to the three and the five. Gap alignments and gap responsibilities are always at the forefront of it all.

It’s the same thing with all of the head-up techniques. I played a lot of 4i and 2i as well. I played some zero as well. It’s important to understand there are similar philosophies once you start going down the line of all these different positions. Realizing and embracing that really helped me minimize the amount of change involved from spot to spot. You have to be physical coming off the rock regardless.

If you have a guy that can be a 4-3 defensive tackle, and a 3-4 defensive end, you now have one, versatile guy that can do multiple jobs. That guy is always going to bring a ton of value to the team.

JM: You were all of those guys at Stanford. Do you feel your game is more advanced as a pass rusher or as a run stopper at this point in time?

TB: I think I’m still improving as a pass rusher. I think I have the physical tools to continue making strides in that area. I’ve put some stuff together while at Stanford. I developed more of a pass rush plan as the years went by.

I’d probably say my run defense is a little more advanced right now. My ability to understand leverage, my ability to understand backside responsibilities is the difference-maker. Alright, the running back is to my side and he’s even, the offensive tackle is leaning a little bit inside, I’m probably going to get a cut-off block here. They’re running zone away from me. Being able to take that knowledge, diagnose it pre-snap and chip my lineman down a little bit helps me execute my responsibilities.

I’m excited to continue developing as a pass rusher. I’ve been working on that throughout the entire pre-draft process and circuit with the Shrine Bowl and every other event I attended. I’ve shown people that I can rush the passer even on those middling second-and-five-type play-action downs where it could be run or pass. I can make an impact there as well.

JM: And You have arms longer than 33 inches. What are some of the ways you use your arm length to gain an advantage in the trenches?

TB: It gives me a huge advantage. Helping create separation is the biggest thing when it comes down to trench play. You obviously have that initial pop and your get-off to really help take control of a rep from the jump. When it comes to run downs and sustaining and getting off blocks, you have to get his body off of yours. You can’t make a tackle on these extremely athletic running backs that have lateral quickness and agility if you can’t disengage from somebody.

My length helps me out a ton in that department. Using my length to completely disengage from somebody helps me shed a blocker. It’s huge, especially in those head-up techniques, those 2i and 4i positions where you’re not already shaded on somebody. I can’t overstate it. It’s a huge deal to get that lock-out, shed, and find the ball-carrier.

JM: There’s no doubt about it. You were electric at the NFL Scouting Combine. Bare with me as I round off some of your impressive results here. You ran the 40-yard dash in 4.95 seconds. That’s wild for a 301-pound defensive lineman. You also ran the three-cone in 7.33s and leaped a 110-inch broad jump. Do you feel like you answered some questions in Indianapolis?

TB: I absolutely did. I think my athleticism, my short-area quickness, and my speed are all extremely strong characteristics of mine. When you look at the tape and see the way that I shake and shed guards and centers out of their shoes, I can get tackles leaning back when I’m at the five-technique. When you look at my combine numbers, it matches what you saw from me on tape. My quickness, agility, and explosiveness, it’s all there. I definitely think I answered some questions about my athleticism.

JM: Who are some of the teams you’ve met with throughout this process, both virtually, and via top-30 in-person visits?

I’ve met virtually with a bunch of teams as well. That list includes the Tennessee Titans, 49ers, Indianapolis Colts, New England Patriots, to name a few. I’ve spoken with the Los Angeles Chargers quite a bit as well.

It’s been a great process for me. I’ve really enjoyed getting to learn about everybody’s philosophies on defensive line play. No two teams I’ve visited have been the same in that regard. It made me really enjoy the experience. I loved meeting with these defensive line coaches and understanding how they coach the position.

JM: There’s a lot of interest in you and it’s easy to see why. I’ve really appreciated your time today. In closing, what kind of impact is Thomas Booker going to make at the next level?

TB: First and foremost, I think I’m a defensive lineman that does things the right way. I’m a guy that can help lift a locker room and improve the culture because of how I address those around me. I’m somebody that loves lifting everybody up with me. From a football standpoint, you’re going to get a versatile defensive lineman who possesses short-area quickness, agility, and power. My attributes in those areas are second to none.

When you turn on the tape, you see a unique blend of power and quickness that I don’t think you see anywhere else in this class. You’re going to get a guy that’s going to completely buy into the program from day one. I’m excited to become a contributor. I’m going to help whichever team drafts me become successful, win games, make the playoffs, and hopefully win a Super Bowl.

That’s what I want to do. You’re going to get a guy that’s going to come in ready to work. Wherever I end up, I’m going to help improve our culture.