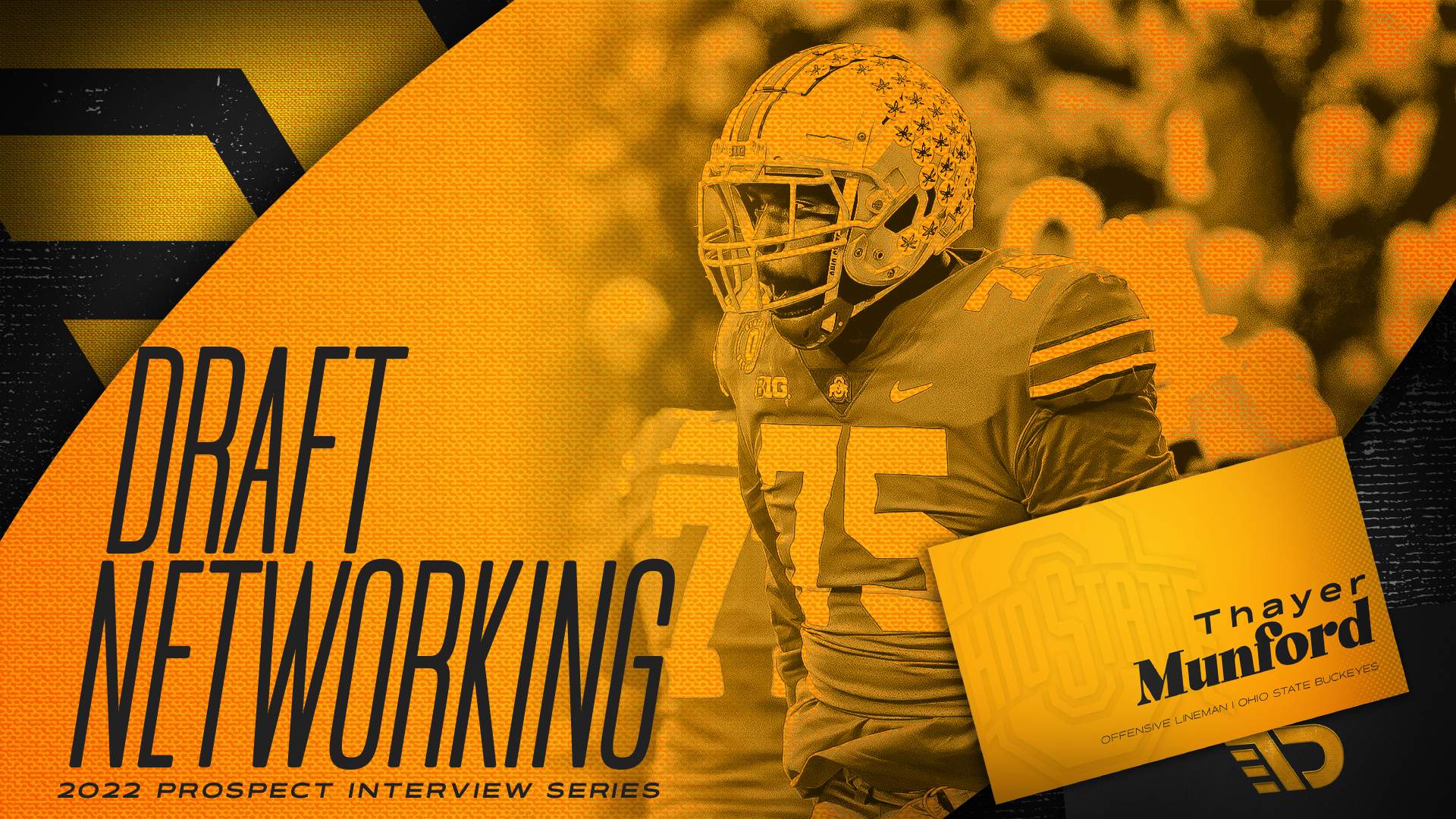 Versatile offensive linemen that can play multiple positions consistently demand attention throughout the NFL draft. In the 2022 class, Ohio State’s Thayer Munford is one of those do-it-all blockers that should be well sought after.

The highly experienced Buckeye played left guard this past campaign after spending a ton of time at left tackle previously. Munford now prepares to enter the league with a ton of versatility and experience under his belt while plying his trade at one of the most successful and historic programs in the nation.

Munford recently spoke exclusively with The Draft Network regarding his career as a Buckeye, which positions he sees himself playing at the next level, his pre-draft experience, which legendary teammates he’d go to war with no questions asked, and so much more.

JM: You leave the Ohio State Buckeyes with more than 45 career games under your belt. How do you look back on your collegiate career?

Munford: I have five seasons and 45 career starts under my belt at the best program in the nation. I look back on that as an accomplishment. I was initially planning to leave for the next level after the 2020 season. I had a great year but I promised my mother that I wouldn’t leave without getting my degree. It’s a promise I made to myself as well. I went down a different path than most. I got my degree before I entered the NFL. It was really important to me and my family. I’m from the first generation of my family to actually get their degree from any college.

JM: It’s a huge accomplishment and we congratulate you on that. I’m sure your family is extremely proud of you. You mentioned making 45 starts. How does having all of that experience at a prestigious program such as Ohio State help prepare you for the next level?

Munford: It’s helped prepare me for the next level by making sure that I hold myself accountable. I became a man at Ohio State. I won’t be alone at the next level of course, but you don’t need to stay on my case in order to ensure I’m reaching my goals. I’m very focused and goal-driven. I understand what it takes to get my body right for the upcoming season. I know how to prepare mentally for the road ahead. I’m ready for the next level.

JM: Focusing on the system specifically, how did operating in that Ohio State scheme help get you ready for what comes next?

Munford: It’s going to help me out so much because we ran basically everything. Coach Ryan Day installed a complex and unique offense. Coach Day has a bunch of NFL experience. Coach Day approaches the game with an NFL mindset on a daily basis. He runs things like an NFL program. He knew exactly what he wanted out of us, and he made that extremely clear to us. Learning from him was a terrific experience.

The offense was a well-oiled machine from a preparation and scheme standpoint. It was really cool to listen and learn from his NFL mind. The way he talks about how an offense should work gave me NFL-level experience. Few collegiate players are lucky to experience that, but that’s what I got from coach Day. He knew what he wanted and he knew how to get that message across to us.

JM: Coach Day is such a terrific coach. You started at left tackle in 2020 and then kicked inside to left guard in 2021. Which position do NFL teams see you playing going forward?

Munford: NFL teams see me playing both tackle and guard positions. I feel comfortable at both spots. To be honest with you, I prefer to play offensive tackle, but I’ll play anywhere my team needs me to. I just want to earn playing time, period. Wherever the team needs me, that’s where I’m going to play. It doesn’t matter what or where it is. I just want to help the team win a Super Bowl.

JM: Sticking with this topic, what are the main differences between playing tackle and guard? What was the transition like for you?

Munford: The main difference between tackle and guard, in my opinion, is the physicality of it. It gets physical down in those trenches. They can be relatively similar at times but the action is right there in front of you at guard. At tackle, you get a bit more time to think about what you want to do. You don’t get as much time to think at guard and you have to execute in a more timely manner.

JM: That certainly makes sense. Have you met with many teams virtually or via Top 30 in-person visits, and do you have any more of those coming up?

Munford: I’ve met with the Denver Broncos, Seattle Broncos, Las Vegas Raiders, and New York Giants, to name a few. I took a Top 30 visit with the Raiders. A lot of other teams have been calling me and hitting me up. We’ve been hopping on different Zoom calls. I get text messages. Speaking with coaches and NFL decision-makers has been a great experience for me. It’s a great feeling to know teams want to draft me.

JM: There’s a lot of interest in you and it’s easy to see why. You’ve had so many legendary teammates throughout your time at Ohio State. If you were going to war tomorrow and could bring one teammate with you from your time as a Buckeye, who would you bring and why?

Munford: Wow, that’s such a tough question. I’m not sure I can pick just one, man (laughs). My time at Ohio State was amazing. I gained so many brothers throughout my time there. They’ve helped me so much. We went to war together every year. We had so many hard-fought battles. As players at Ohio State, we went through everything together. It didn’t matter if you were a younger or older player. You’re still a part of the brotherhood we form there.

I can’t just pick one. I’ll say this. If I had to go to war with somebody, I’d probably pick the classmates I came in with, Josh Myers and Wyatt Davis. That bond just hits a little differently when you come in together. We’ve been through a lot together.

JM: That’s a great answer, and I thank you for narrowing it down a bit. I understand it’s a difficult question. I’ve appreciated your time today. What kind of impact is Thayer Munford going to make at the next level?

Munford: I plan to make a huge impact at the next level. I think teams are comfortable with who I am as a prospect in this draft class, and also as a person and player. I’m going to have a lot of fun playing the game that I love so much professionally. It’s always been my dream.