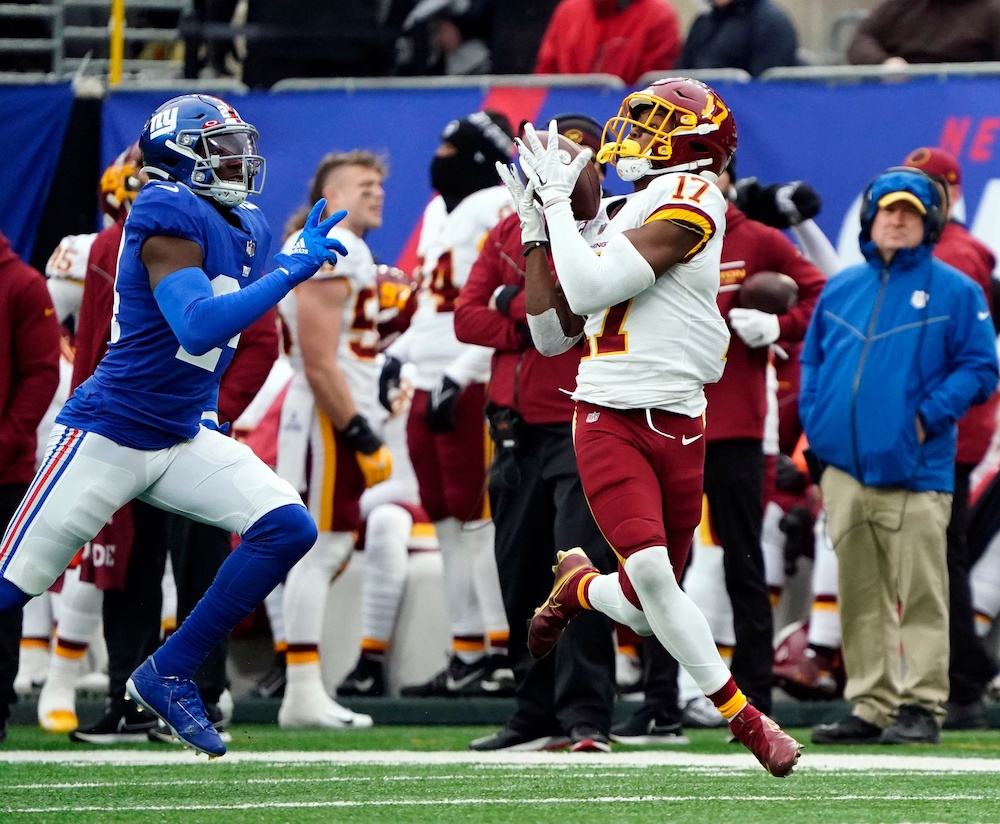 The wide receiver trade market has been historically hot and active throughout this unpredictable offseason. The going rate to secure the services of a legitimate No. 1 receiver has skyrocketed and it’s a development that has led to several jaw-dropping trades, which Commanders wide receiver Terry McLaurin could be monitoring himself.

The Green Bay Packers failed to reach an agreement on a long-term extension with Davante Adams, who was shockingly traded to the Las Vegas Raiders. A similar story played out in Kansas City before Tyreek Hill was sent to the Miami Dolphins in exchange for five future and immediate draft selections. The Los Angeles Rams traded Robert Woods to the Tennessee Titans, and more recently, the Miami Dolphins sent disgruntled receiver Davante Parker to the division-rival New England Patriots.

The likes of D.K. Metcalf, Brandin Cooks, A.J. Brown and even Deebo Samuel have witnessed their name mentioned in potential trade scenarios, some of which are largely without merit. The latest victim of such chatter is Washington Commanders receiver Terry McLaurin, who is preparing to enter the final year of a low-cost, four-year rookie contract that currently underpays him. McLaurin is coming off three straight seasons with over 900 receiving yards, including back-to-back 1,000-yard campaigns in 2020 and 2021. McLaurin is set to earn just $2.790 million this coming season and with the wide receiver market completely reset, McLaurin could seek a contract extension worth $20 million annually.

According to The Athletic’s Ben Standig, NFL teams have begun monitoring McLaurin’s impending contract negotiations in case he too becomes available via trade. We’ve identified three teams that must pay close attention to the situation.

The Jets made an aggressive attempt to acquire Hill from the Chiefs, one that was potentially more lucrative than what the Chiefs ultimately received from Miami. Hill ultimately chose to join the Dolphins, but the Jets’ competitive offer was extremely notable. General Manager Joe Douglas clearly possesses interest in attracting another high-level receiver to help round out his underrated offensive cast. Elijah Moore, Corey Davis and Braxton Berrios remain in New York for the foreseeable future, as all three pass-catchers have several years remaining on their respective contracts, but that won’t stop Douglas from adding to this group.

Douglas is building a cast of weapons that leaves no excuses for sophomore quarterback Zach Wilson. The free-agency additions of tight ends C.J. Uzomah and Tyler Conklin have further signaled Douglas’ intentions. The offensive line contains several ascending pieces and Michael Carter is an exciting dual-threat ball-carrier in the backfield. Douglas will seemingly continue monitoring the wide receiver trade market in the months ahead and should McLaurin’s contract situation unravel to the point where a trade becomes increasingly possible, don’t be surprised if the Jets quickly state their interest.

The Chiefs are an obvious candidate to monitor the veteran receiver trade market after dealing Hill to the Dolphins. Witnessing Kansas City’s offense operate without the speedy Hill as its centerpiece is going to be a strange exercise to partake in throughout 2022. There’s no player quite like Hill in the National Football League, but Chiefs General Manager Brett Veach should be eager to replace Hill with another high-quality No. 1, dominant boundary receiver. McLaurin is certainly that type of talent.

The Chiefs added Marquez Valdes-Scantling following Hill’s departure, and the offseason addition of JuJu Smith-Schuster should provide superstar quarterback Patrick Mahomes with another weapon in the passing game alongside elite tight end Travis Kelce. Kansas City’s offense should still be extremely effective and efficient with such pass-catchers in the fold, but expectations are always sky-high for a Chiefs franchise that has advanced to three straight AFC Championship Games and two Super Bowls within that time frame, winning one. Kansas City’s AFC West rivals absolutely loaded up on talent this offseason and the Chiefs became more vulnerable following Hill’s departure. The ultra-aggressive Chiefs will want to make a move here eventually.

The Packers make this list for similar reasons in relation to the Chiefs’ placement, only they should possess an even greater sense of urgency. Losing Adams to the Raiders was a monumental blow for a franchise that finds themselves in the twilight years of their Super Bowl window. Franchise quarterback Aaron Rodgers signed a historic four-year extension with the Packers earlier this offseason, but is notably entering his age 39 season. The Rodgers-to-Adams connection quickly became the most feared phrase for opposing secondaries in recent seasons, and Packers General Manager Brian Gutekunst certainly has his work cut out for him as he attempts to limit the damage done to Green Bay’s passing offense in Adams’ absence.

As mentioned under the Chiefs heading, the Packers also lost Valdes-Scantling this offseason. Green Bay’s current depth chart contains Randall Cobb, Allen Lazard and Amari Rodgers as their top three receivers. That’s not exactly a murderer’s row of talent that instills fear in defenses. The Packers are prime candidates to draft a receiver in the first round of the 2022 NFL Draft but should also monitor the trade market for a true game-changer. McLaurin fits that definition.