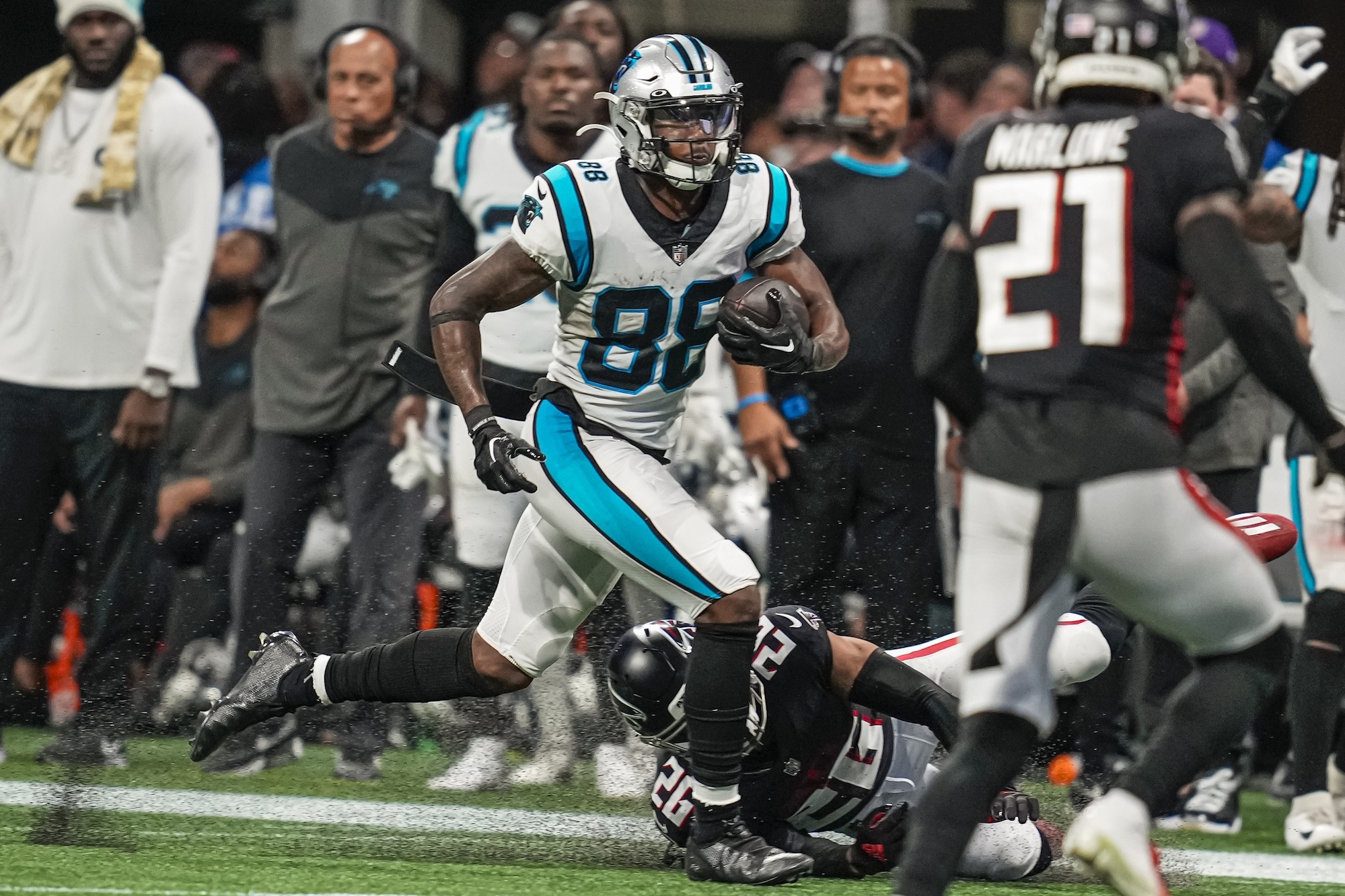 The Carolina Panthers suffered a tough-pill-to-swallow defeat in overtime to the Atlanta Falcons on Sunday. The Panthers squandered multiple opportunities to claim victory throughout the fourth quarter and overtime. The defeat dropped the hapless Panthers to 2-6 where a victory would have catapulted them to first place in the NFC South. The Panthers will take away several minor victories in relation to the performances of their young players, however. Sophomore wide receiver Terrace Marshall Jr. is finally developing into a standout performer.

The No. 59 overall selection in the 2021 NFL Draft, Marshall converted a career-high nine targets into four receptions for 87 receiving yards. It represented career-highs for Marshall in receiving yards and yards per reception (21.8). This all occurred throughout what was easily Carolina’s best offensive performance of the season with backup quarterback P.J. Walker at the helm.

Marshall is beginning to gain influence under the guidance of interim head coach Steve Wilks. Marshall played a career-high 74 snaps against the Falcons on Sunday. It accounted for a whopping 92% of Carolina’s offensive plays. Dating back to his rookie campaign, Marshall had never played more than 54 snaps in a single showing. Marshall’s season-high in snaps was previously 43, and it occurred last week. Marshall is beginning to string together consistent performances and he’s being rewarded as a result.

It’s been a long and winding road for Marshall to reach this point. Marshall entered the campaign on the heels of a disappointing rookie season where the former LSU standout amassed just 17 receptions for 181 yards in 13 regular-season appearances. Injuries were an issue, and former head coach Matt Rhule called Marshall out for his inability to remain healthy during the summer.

“We need Terrace to start practicing,” Rhule said in mid-August after Marshall suffered a recurring hamstring injury during joint practices against the New England Patriots. “We need him to step up,” Rhule concluded.

Marshall has stepped up, but Rhule is no longer in charge to oversee his development. Marshall was on the receiving end of three end-zone targets on Sunday. A 39-yard fourth-quarter catch-and-run qualified as the longest reception of Marshall’s young career, and just the second explosive reception (20-plus yards) he’s secured across 2021 and 2022. Marshall totaled 92 air yards, per Michael Florio.

Marshall is now averaging a chain-moving 14.8 yards per reception. As witnessed on the aforementioned 39-yard reception, Marshall is also becoming a threat in the open field. Marshall is averaging 6.6 yards after the catch per reception, via Pro Football Focus. Carolina’s quarterbacks are enjoying a healthy passer rating of 87.4 when targeting Marshall this season. Marshall has been credited with just one drop this season. He’s developing into a reliable weapon for a Panthers passing game that has struggled to make plays all year long.

The Panthers are in rebuild mode. General manager Scott Fitterer currently owns the No. 3 overall selection in the 2023 NFL Draft. Quarterbacks Bryce Young and C.J. Stroud will be popular mock draft targets for the Panthers, and understandably so. Whoever lines up under center for Carolina in 2023 will benefit from having Marshall at their disposal.