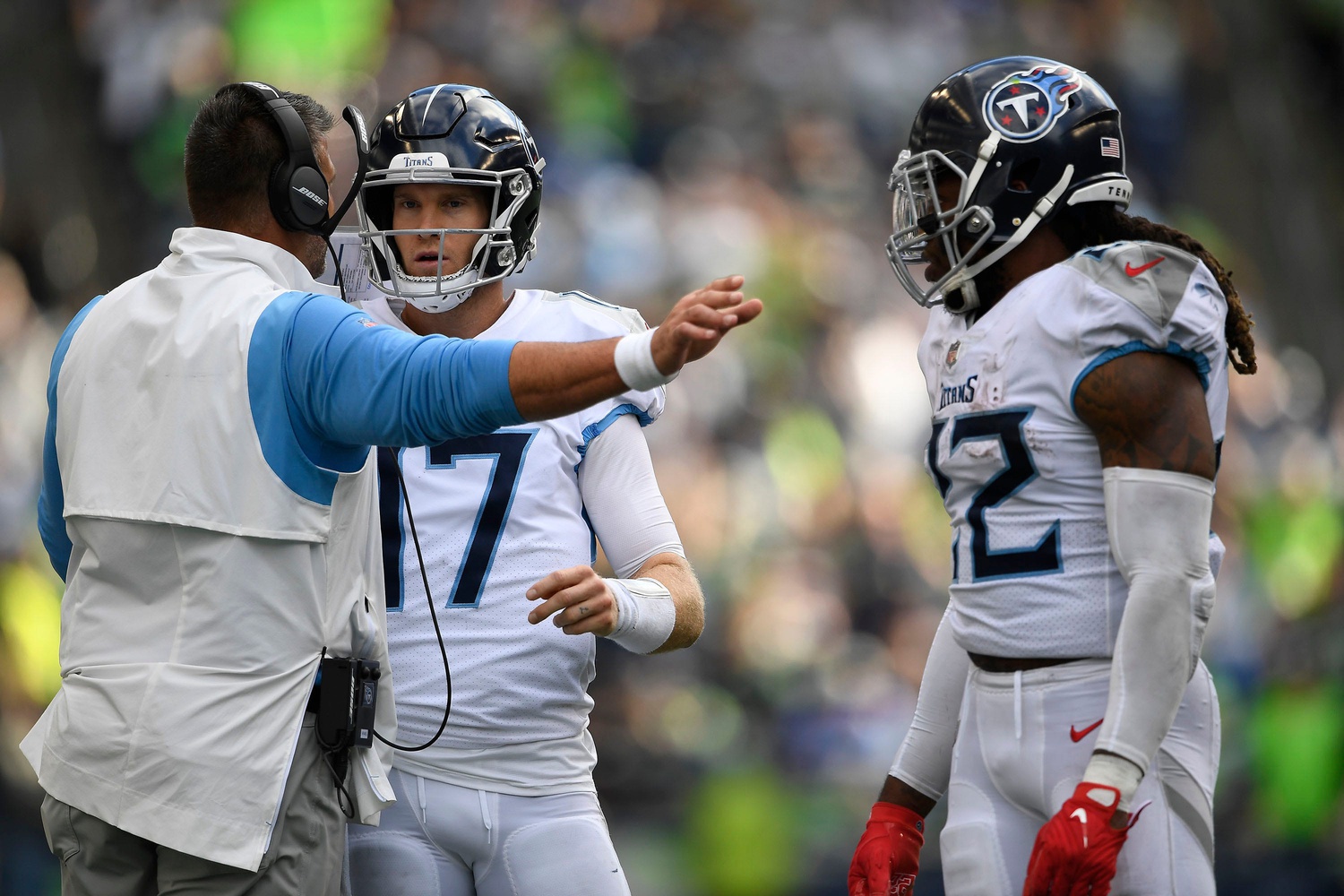 What Will Make 2022 Season A Success For Titans?

Determining what a successful season looks like for the Tennessee Titans in 2022 can lead to a difficult conversation. The Titans have captured back-to-back division titles since making an unlikely appearance in the AFC Championship game (as a wild-card team) in 2019. Another playoff appearance is expected, but the narrative is beginning to slightly shift as Tennessee’s roster gets older, particularly on the offensive side of the ball.

The Titans have strung together six consecutive winning seasons. Their last losing season occurred way back in 2015. They’re no longer the Titans from 2009-15 that were disregarded and forgotten while failing to make a single postseason appearance.

Winning breeds expectations, however, and the Titans haven’t exactly satisfied their fan base over the previous two seasons. Back-to-back division titles haven’t resulted in the desired postseason success. The Titans have lost two straight home playoff games without rounding off a single playoff victory. Last season’s divisional loss to the Cincinnati Bengals especially stung. The Titans possessed the one-seed in the AFC and held home-field advantage up until the Super Bowl. Failing to host the AFC Championship game was viewed as a disappointing failure given the success of their 12-win regular season. They’ve continued to chase the ghost of their 2019 playoff run to no avail. 2022 may represent this core’s last chance to achieve something special.

The 2022 Titans, like the 2021 version, will likely be powered forward by a dominant defense. While last season’s defensive success was unexpected, a repeat of those results is very much the current expectation. The Titans’ defense ranked inside the top 10 of multiple regular-season categories, including rushing yards allowed per contest (84.6/game, second place), points allowed per game (20.8/game, sixth place), and sacks (43 quarterback takedowns, tied for ninth place). Continued success is expected in 2022 with 10 of 11 starters returning from last season. That sole new starter is expected to be former first-round cornerback Caleb Farley, who was always drafted to become an eventual starter.

A haunting front four featuring a pass rush made up of Jeffery Simmons, Harold Landry, Denico Autry, and Bud Dupree should place plenty of stress on opposing pockets. There’s a path for this unit to be even better in 2022. Dupree is now a full year removed from an ACL recovery that limited his availability and effectiveness last season. Simmons is entering the prime of his career and should continue improving after breaking out of his shell in 2021. Landry is a consistent performer and leader. Opposing quarterbacks have been placed on notice. Starting linebackers David Long Jr. and Zach Cunningham showcased the playmaking chemistry necessary that rounds out Tennessee’s front seven nicely.

The secondary is bursting with talent. Kristian Fulton enjoyed a fellow breakout season while becoming an elite boundary cover-man. Kevin Byard is one of the best safeties in the league. A true ball-hawk, Byard is a turnover machine with the range and smarts necessary to flip a game on its head in an instant. Amani Hooker blossomed as a first-year starter in 2021 and is an appropriate back-end partner for Byard due to an interchangeable skill set. The Titans added to their cornerback room by drafting former Auburn standout Roger McCreary with the 35th overall pick in the 2022 NFL Draft. McCreary is capable of playing both outside and at the nickel, and could immediately take up a role in Tennessee’s secondary. The Titans also feature terrific veteran depth at the position. Both Buster Skrine and Chris Jackson have performed admirably when thrust into starring roles. Elijah Molden enjoyed an excellent rookie season in 2021. Tennessee’s secondary pairs perfectly with their pass rush. It’s a true team effort that sees one unit make life easier for the other.

While the defense features few question marks, the offense is littered with them, starting at quarterback. Ryan Tannehill was supremely disappointing in 2021 after playing an excellent brand of football in 2019 and 2020. Tannehill’s struggles reached a boiling point at the worst possible time. A three-interception performance in the playoff defeat to the Cincinnati Bengals hasn’t been forgotten by a fan base that demands better.

Tannehill is entering a do-or-die season in 2022. Repeat performances would make Tannehill unlikely to be on the Titans’ roster in 2023. Tannehill can still salvage his future in Tennessee by reverting back to the signal-caller that led elite offenses in 2019 and 2020, but he’s very much on the hot seat. Titans General Manager Jon Robinson has potentially already prepared for that scenario by drafting former Liberty quarterback Malik Willis in the third round. Willis has plenty to prove as a raw prospect coming out of college, but Titans fans have already gotten ahead of themselves while anointing Willis as the future starting quarterback.

Some are also questioning the effectiveness of superstar running back Derrick Henry, who suffered his first serious injury in 2021. The former Alabama ball-carrier suffered a late-October foot injury that ruled him out for the remainder of the regular season. Prior to suffering the foot injury, Henry was leading the league in carries, rushing yards, and rushing touchdowns, and was on pace to break the all-time NFL rushing record while averaging a league-best 117.1 yards per game. Henry is likely the least of Tennessee’s concerns, but it’s certainly worth monitoring his form going forward, especially because of the wear on his tires.

However, the offensive line has two significant question marks. Former starting left guard Rodger Saffold was a cap casualty and will be replaced by either cost-effective free-agent signing Jamarco Jones or third-year utility offensive lineman Aaron Brewer. Second-year offensive tackle Dillion Radunz is expected to start at right tackle after essentially red-shirting as a rookie last season. It’s a giant “who knows” at both positions.

The Titans have completely revamped their pass-catching corps this offseason. Julio Jones was released after failing to stay healthy and meet expectations. Most notably, A.J. Brown was traded to the Philadelphia Eagles in exchange for a first-round draft pick following a contract dispute. The Titans used that pick to essentially draft Brown’s replacement in Treylon Burks. Fellow rookie Kyle Philips is also expected to play a significant role as the team’s slot receiver. That’s a lot of youth to rely on—not ideal given that Tannehill is entering a crucial campaign. Hope can be found via two offseason acquisitions. Robert Woods and Austin Hooper joined earlier this offseason and should provide Tannehill with the reliable safety net he lost in Brown (while failing to match Brown’s upside).

There’s a decent chance that several of Tennessee’s offensive starters won’t be on the roster in 2023. That list includes Tannehill, starting left tackle Taylor Lewan, Woods (who doesn’t have any guaranteed money in 2023), Hooper (who signed a one-year contract), and even Henry, although his metaphorical departure seems less likely, but not impossible. 2022 can be viewed as a competitive rebuild with an eye pointed towards the future, although some version of postseason success is still expected.

Robinson focused on the future of his offense in this year’s draft. It’s no coincidence. If players such as Willis, Burks, Philips, Hassan Haskins, Chigoziem Okonkwo, and Nicholas Petit-Frere pan out, the Titans could realistically achieve success in 2022 while also setting themselves up nicely for 2023 and beyond.

It’s also fair to wonder if the Titans have fallen behind in the ever-competitive AFC this offseason. The Kansas City Chiefs and Buffalo Bills are still viewed as the top-two conference favorites due to their desirable situations at quarterback. The Bengals qualified for last season’s Super Bowl. The Denver Broncos, Miami Dolphins, New York Jets, Cleveland Browns, Baltimore Ravens, Los Angeles Chargers, and Las Vegas Raiders have experienced wildly aggressive offseasons. It’s worth noting not a single one of these teams won as many games as the Titans did last season, and football games aren’t won on paper, but it’s fair to assume Tennessee’s 2022 win total could fall behind a handful of these teams. Luckily for the Titans, however, none of these teams compete in the AFC South, and Tennessee employs the reigning Head Coach of the Year in Mike Vrabel, who’s yet to experience a losing season in Nashville.

Even with so many question marks and changes across the offense, the Titans should be viewed as slight favorites to capture their third straight division title. The Houston Texans and Jacksonville Jaguars aren’t ready to compete at that level yet, and the Indianapolis Colts must prove they can actually threaten the Titans for the AFC South’s crown before being seen as favorites to do so.

The Titans should qualify for the postseason for the fourth consecutive season in 2022, although a slight step backward is likely. 2022 may represent a last-ditch attempt for this version of the roster to recapture the final-four success achieved in 2019. A successful season in Tennessee would have to include at least one postseason victory.