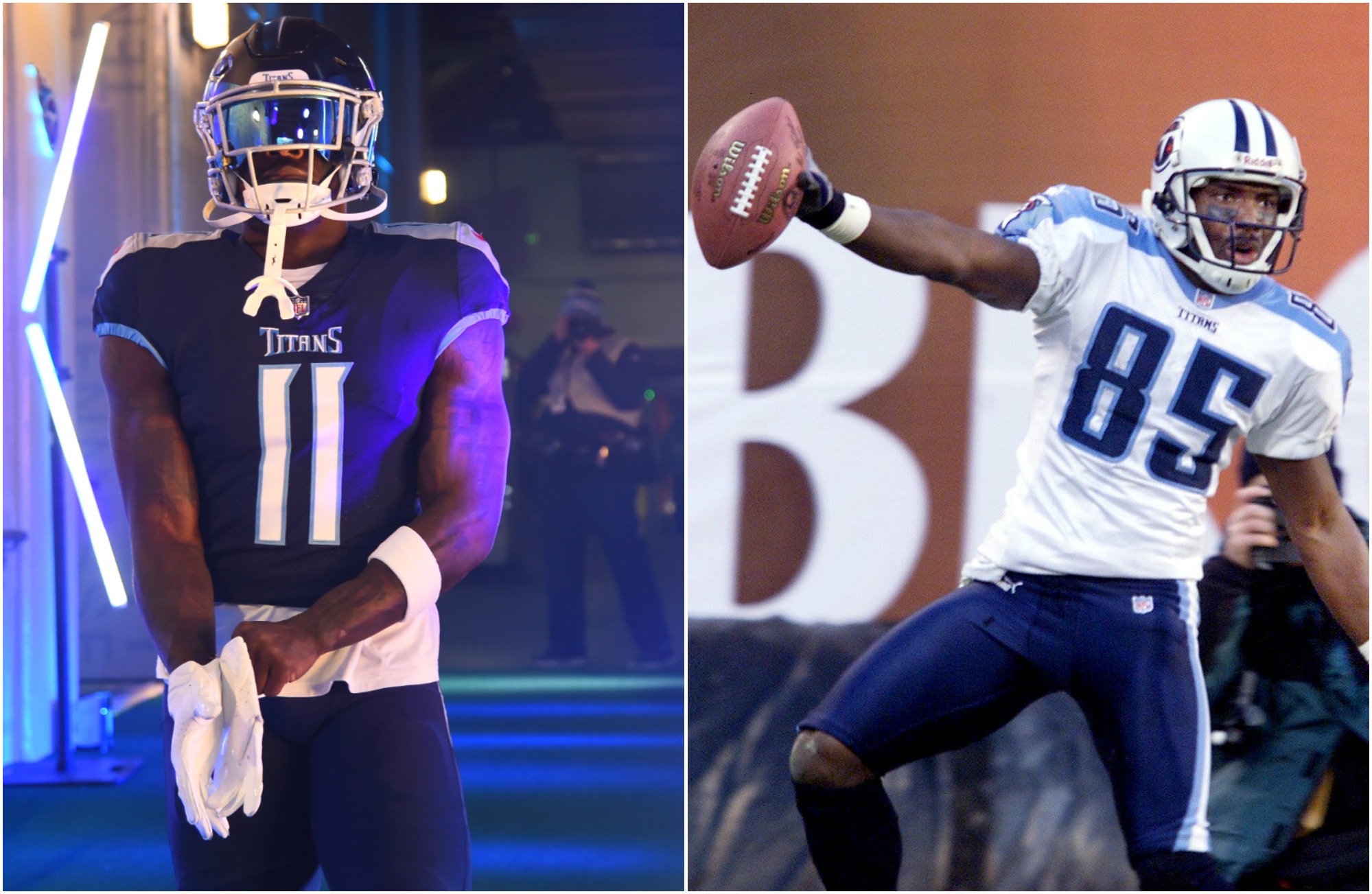 Current Philadelphia Eagles and former Tennessee Titans wide receiver A.J. Brown caused quite the uproar on Twitter on Monday afternoon. In response to an angry Titans fan, Brown claimed to be the “best receiver” to ever play for the Titans franchise before telling the disgruntled fan to “shut up and move on.”

Brown was referring to a shocking draft-day trade that unexpectedly sent him from the Titans to the Eagles following a contract dispute, one that has made Brown an unforeseen villain in Nashville. Brown’s claim ignited quite the debate amongst the Titans fan base.

Brown was explosive in Tennessee, but three seasons remains far too small of a sample size to be regarded as the franchise’s all-time great. Across those campaigns, Brown accounted for 185 receptions, 2,995 receiving yards, and 24 touchdowns. He routinely made explosive plays in the passing game throughout one of the more successful eras of Titans football in recent memory (two straight division titles and three consecutive postseason appearances with Brown on the roster, including an appearance in the AFC Championship game).

For a franchise that has historically struggled to secure the services of high-level receivers (they drafted Kevin Dyson over Randy Moss), Brown seemed well on his way to eventually cementing himself as the greatest receiver in Titans history. A contract dispute ultimately ended their marriage far earlier than anyone envisioned, an occurrence that simultaneously ended Brown’s chances of truly going down in Titans history. It’s why that title still belongs to Mason, who quickly shared his public disdain for Brown’s claims.

Mason enjoyed a longer and more successful tenure as a member of the Titans. A fourth-round selection out of Michigan State in the 1997 NFL Draft, Mason played for the Oilers/Titans from 1997 to 2004. Mason ranks fifth on the franchise’s all-time receptions list (453), sixth in receiving yards (6,114), and sixth in touchdowns (37). Mason recorded four consecutive 1,000-plus yard seasons from 2001 to 2004 in a league that was far less pass-happy than it is today. Mason gained 1,030 yards returning kicks and punts throughout the 1999 season, which ended in Tennessee’s lone Super Bowl appearance (Super Bowl XXXIV). Mason wasn’t yet an offensive fixture at that point in time (he was still a special teams ace), but did return eight kicks for 322 yards and a touchdown in their run to the Super Bowl. He’s fondly remembered alongside the likes of Steve McNair, Eddie George, and Frank Wychek.

It’s worth noting Mason’s reputation in Tennessee isn’t crystal clear either. Mason signed with the Titans’ at-the-time rival Baltimore Ravens following his departure from the team in 2005, but Brown was more so at the forefront of his ugly departure from Nashville than Mason was. Mason also retired as a Raven, not as a Titan.

Brown departs the Titans as the team’s 19th all-time receptions leader, 16th all-time receiving yards leader, and 12th all-time receiving touchdowns leader. It all combines to represent both an impressive and sad situation. Brown’s ability to climb up the franchise’s all-time leaderboard in just three seasons showcases both his immediate success and Tennessee’s lack to draft and develop (or more importantly in Brown’s case, hold onto) dominant No. 1 receivers.

Saying “Titans” history perhaps removes the history of the Houston Oilers from the conversation, which would strengthen Brown’s argument, although it still falls short. The Oilers possessed several legendary receivers, particularly through their “run-and-shoot” era, a list that includes Ernest Givens (their all-time receptions leader with 542 and all-time receiving yards leader with 7,935), Haywood Jeffries, and Drew Hill. Ken Burrough and Charley Hennigan (all-time receiving touchdowns leader with 51) are also in the conversation as all-time Oiler greats.

Brown is the most talented receiver to ever play for the Titans (discounting Randy Moss, Andre Johnson, and Julio Jones, who all joined the Titans well past their primes), but he’s not the greatest receiver in franchise history. Ugly business dealings between both parties ultimately prevented Brown’s claim from coming to fruition. Oh, what could have been.