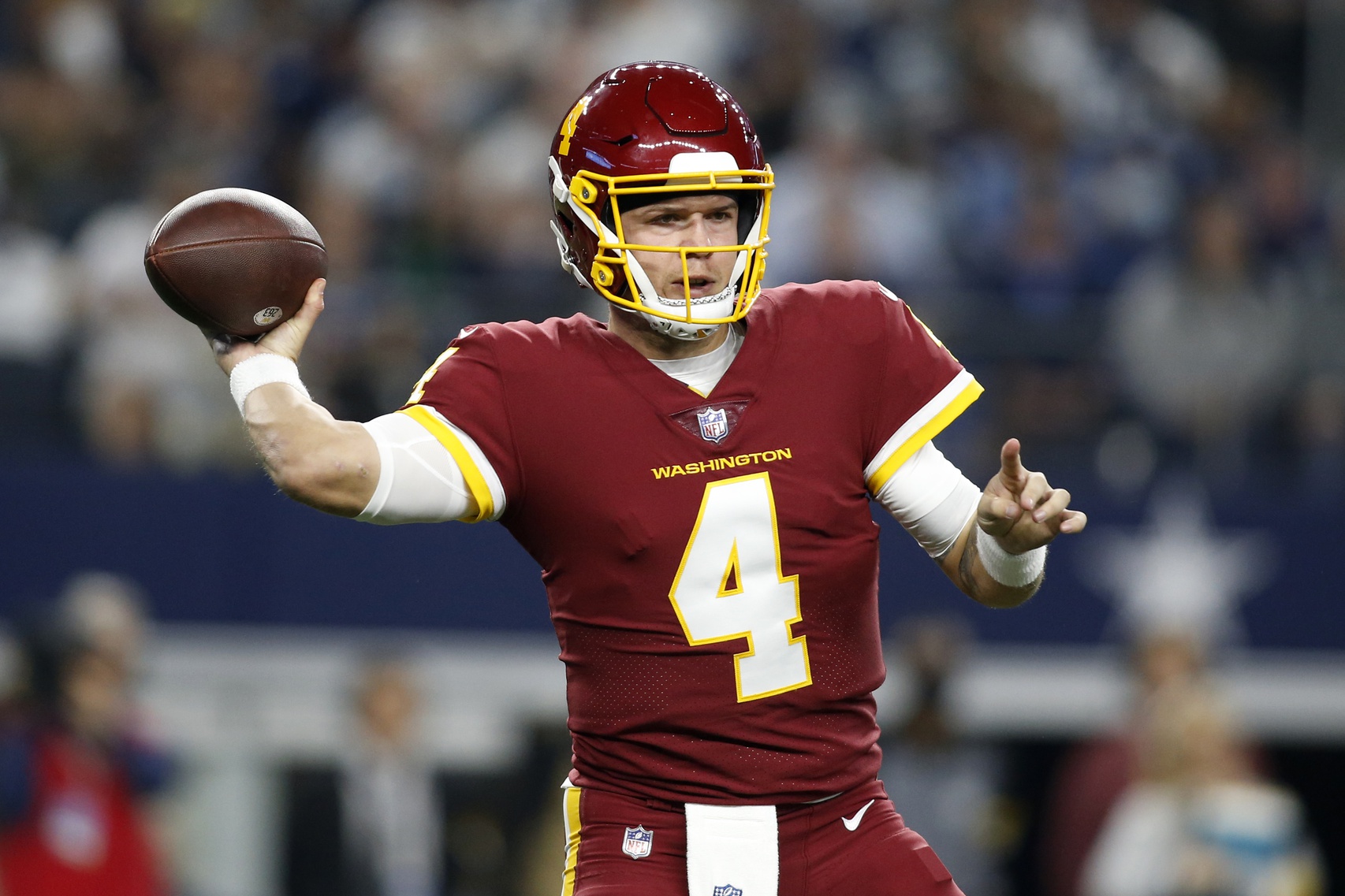 The Washington Commanders have quickly revamped their quarterback room this offseason after entering last season with Ryan Fitzpatrick and Taylor Heinicke atop the depth chart. General manager Martin Mayhew aggressively pursued Russell Wilson via trade. When Wilson opted for a move to the Denver Broncos instead, Mayhew swiftly responded by acquiring Carson Wentz from the Indianapolis Colts.

The Commanders weren’t done adding quarterbacks, however. Mayhew then drafted former North Carolina quarterback Sam Howell with the No. 144 overall selection in this past weekend’s 2022 NFL Draft. Landing Howell in the fifth round represents excellent value for a Commanders organization that should be uncertain regarding the future of their quarterbacking plans.

Adding Howell to the mix could also mean Heinicke is the odd man out in Washington. Heinicke was unexpectedly thrust into the starting quarterback role in 2021 following a season-ending hip subluxation injury suffered by at-the-time starter Ryan Fitzpatrick in the second quarter of Washington’s Week 1 contest. Heinicke largely failed to take advantage of the opportunity by throwing for just 3,419 yards, 20 touchdowns, and 15 interceptions in 16 regular-season appearances.

The Commanders missed the playoffs after compiling a less-than-desirable record of 7-10, and the front office told you all you need to know regarding their opinion of Heinicke when they went out and acquired Wentz.

Heinicke still possesses redeeming qualities as a high-level backup or borderline starter. With Heinicke potentially on the move in the wake of Washington’s quarterback developments, we’ve identified three teams that should have an interest in acquiring the quarterback.

The Seattle Seahawks bafflingly decided against drafting a quarterback in the 2022 NFL Draft despite having several opportunities to do so. Most notably, Seattle owned the No. 72 overall selection in the third round. General manager John Schneider and head coach Pete Carroll decided to draft former Washington State offensive tackle Abraham Lucas with that selection despite a pair of intriguing mid-round quarterbacks being on the board. Desmond Ridder and Malik Willis would both get drafted within the next 15 selections, with Ridder most notably going just two picks after Seattle chose Lucas. Seattle seems oddly confident about going into the regular season with Drew Lock and/or Geno Smith under center following the aforementioned trade that sent Wilson to the Broncos.

Seattle’s opportunity to draft and groom a young signal-caller has passed them by, but they can still promptly address the position by trading for Heinicke. Training camp should feature a wide-open competition between Lock and Smith, and there’s little reason why Heinicke can’t be added to the mix.

Perhaps the Seahawks are waiting on a trade for Baker Mayfield or Jimmy Garoppolo, although the San Francisco 49ers may be hesitant to trade Garoppolo within the division. What we know for sure is that Seattle requires more at quarterback and Heinicke is capable of moving the needle forward.

Holmes took the first necessary step by signing D.J. Chark in free agency. Chark immediately gives the Lions the type of field-stretching receiver their offense missed last season. Holmes then became aggressive in the 2022 NFL Draft by trading up 20 spots from No. 32 to No. 12 to draft Alabama’s Jameson Williams. Don’t look now, but Williams and Chark should form an exciting and fearsome duo going forward. Amon-Ra St. Brown enjoyed a historic rookie campaign and will continue to develop in impressive fashion, giving the Lions three legitimate weapons at receiver. Holmes also filled out the position group nicely by re-signing Josh Reynolds and Kalif Raymond.

All this to say it would be a shame if a Goff injury derailed the bright possibilities. The Lions currently own the worst backup quarterback situation across the league. Tim Boyle and David Blough are not capable NFL quarterbacks. Boyle saw limited action due to a Goff injury last season and responded by throwing just three touchdowns and six interceptions while earning a horrid QBR rating of 26.4. Heinicke probably wouldn’t push Goff for the starting job, but he would give the Lions a much better fallback option than the ones they currently roster.

Trey Lance is undeniably the future in San Francisco, and the sophomore signal-caller is expected to serve as the team’s starting quarterback going forward. General manager John Lynch has had a more difficult time than expected trading Garoppolo, reportedly due to a shoulder injury that required offseason surgery.

Garoppolo will inevitably be traded at some point, and the 49ers surely hope that time comes prior to kicking off the 2022 regular season. Garoppolo is set to earn a base salary of $24.2 million this season while carrying a large cap hit of $26.950 million, via Spotrac. Being forced to hold onto Garoppolo’s bloated contract has negatively impacted San Francisco’s ability to add talent throughout the offseason.

When the Garoppolo trade finally occurs, it will leave the 49ers with a less-than-desirable situation at backup quarterback. Veteran journeyman Nate Sudfeld is on the roster but has hardly looked capable of keeping an offense efficient and on schedule when tasked to do so. The 49ers also drafted former Iowa State quarterback Brock Purdy with a seventh-round selection in the 2022 NFL Draft, but Purdy has a long way to go before he proves trustworthy of serving as Lance’s dedicated backup.

Heinicke is an excellent athlete for the position that is capable of operating San Francisco’s offense should Lance go down with an injury. Acquiring Heinicke would immediately upgrade San Francisco’s backup quarterback spot when Garoppolo is inevitably moved.