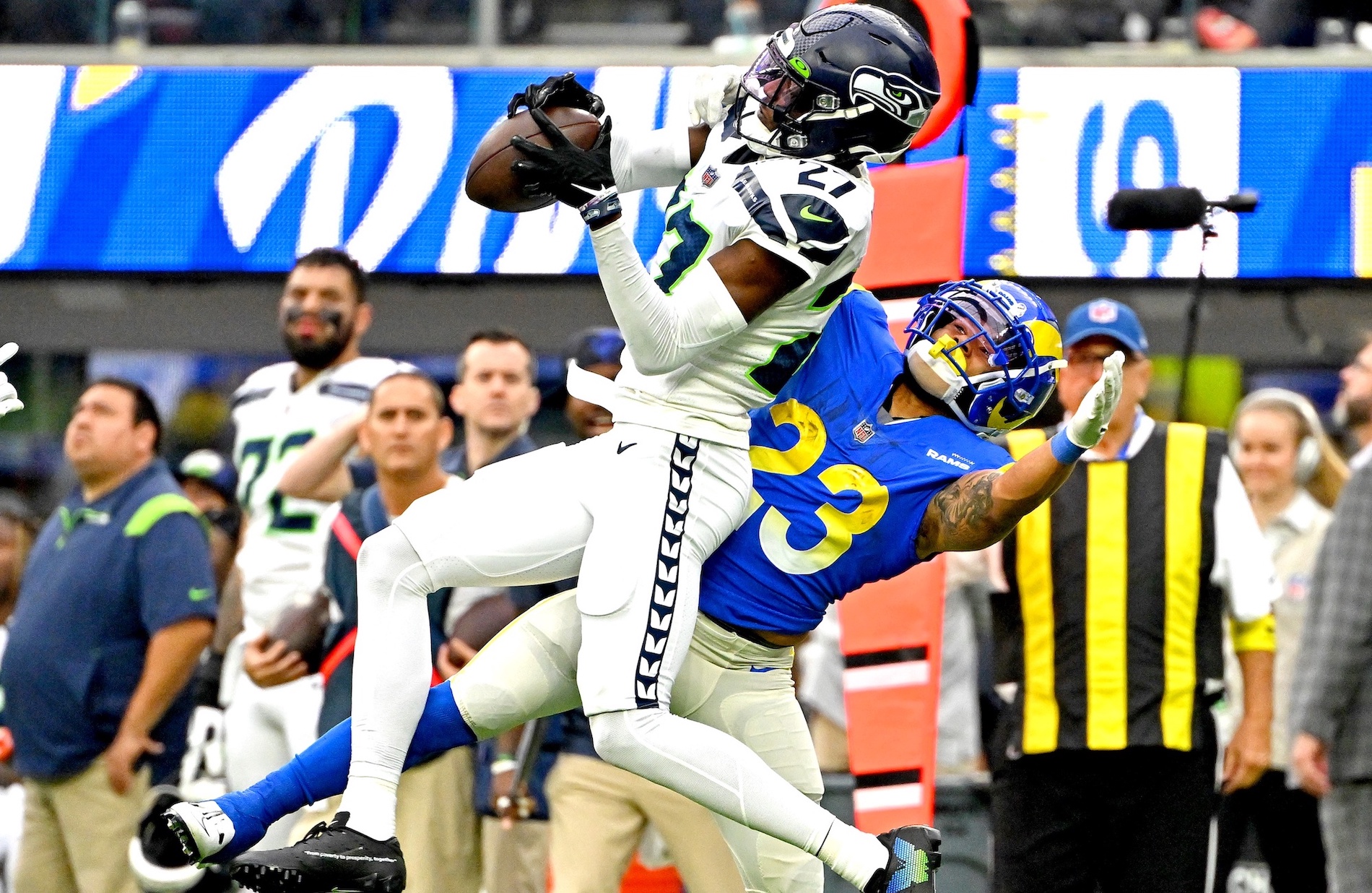 Tariq Woolen Is A Special Talent

It’s hard to overstate how special Seattle Seahawks rookie cornerback Tariq Woolen really is. After Sunday’s game against the Los Angeles Rams—the best performance of his career so far—he looks like the clear Defensive Rookie of the Year frontrunner and like he already belongs in the NFL’s elite tier of cornerbacks.

From a pure tools perspective, Woolen’s height/weight/speed measurables were among the very best at the cornerback position in his draft class. But as a guy who converted to cornerback from wide receiver, his lack of experience at the position seemed to scare teams away enough to let him drop to the fifth round, measurables and quality tape be damned. My colleague Ryan Fowler wrote about how big of a mistake that was after Woolen balled out in his first month in the NFL, and the rookie hasn’t slowed down since.

Over the last two months, Woolen recorded four interceptions, giving him six on the season and tied for the league lead. As a rookie. In the eight games over that span, he also has nine pass defenses (12 total and fourth in the NFL) and two fumble recoveries. Things have been going well for Woolen—his production over his first month in the NFL was not just a flash in the pan—but his most recent performance against the Rams was his pièce de résistance, taking everything to another level.

Woolen made plays all over the field on Sunday, recording three pass breakups and an interception while allowing just one completion in Los Angeles. They weren’t your average, run-of-the-mill plays either. No, Woolen was doing things that most human beings—let alone NFL players—would not be able to do on defense. His athletic ability alone makes it possible for the rookie to recover and make plays on the ball even after it looks like he’s out of range to do anything.

Take his interception, for example.

Woolen is at the bottom of the screen, initially biting on the fake pitch to the running back before flipping his hips back the other direction to get depth quickly. By the time Rams quarterback John Wolford was out of the bootleg and ready to throw, the rookie cornerback had beaten running back Kyren Williams’ spot on a wheel route before he did. All that was left from there was winning a jump ball against a guy seven inches shorter than him, which Woolen did easily.

The rookie’s recovery and closing speed turned out to be the theme of the game for him and the Seahawks’ defense because he showed it off a couple more times later that afternoon. Nearly every time Wolford targeted Woolen because it looked like he’d been beaten, the cornerback made him pay by making a great play on the ball.

On this play, receiver Tutu Atwell had a nearly five-yard lead on Woolen when the ball was thrown. The rookie didn’t panic. Just like the play that resulted in his sixth interception of the season, he trusted his speed to get him to the right place in time to break up the pass and used his length to make the play. For most cornerbacks, those who aren’t as toolsy or as talented as Woolen, that’s probably a bad deep pass allowed at best and a home run touchdown at worst. For a rookie to have that much ability and confidence in his skills is incredible. He only followed it up with another fantastic play in the final seconds of the game.

On a must-have play for the Rams, receiver Ben Skowronek ran a great curl route, working his way back to the quarterback and the ball after it was thrown. With the quick turn and good depth from the receiver, that’s a hard play for most cornerbacks to make. But Woolen is not “most cornerbacks,” and he proved it again with his great change in direction ability that set him up to make a play breaking on the ball before it even got close to Skowronek.

Woolen is easily one of the best cornerbacks in what was a stacked rookie class this year. Through 13 weeks, he’s already starting to make a case for being one of the best cornerbacks in the entire NFL right now. He’s tied for the league lead in interceptions with six and has a 59.9 passer rating allowed so far this year. Considering his skills and the fact that the Super Bowl-era record for interceptions by a rookie is 11, it wouldn’t be surprising to see him break that record and firmly establish himself as a truly elite cornerback just one season into his career.