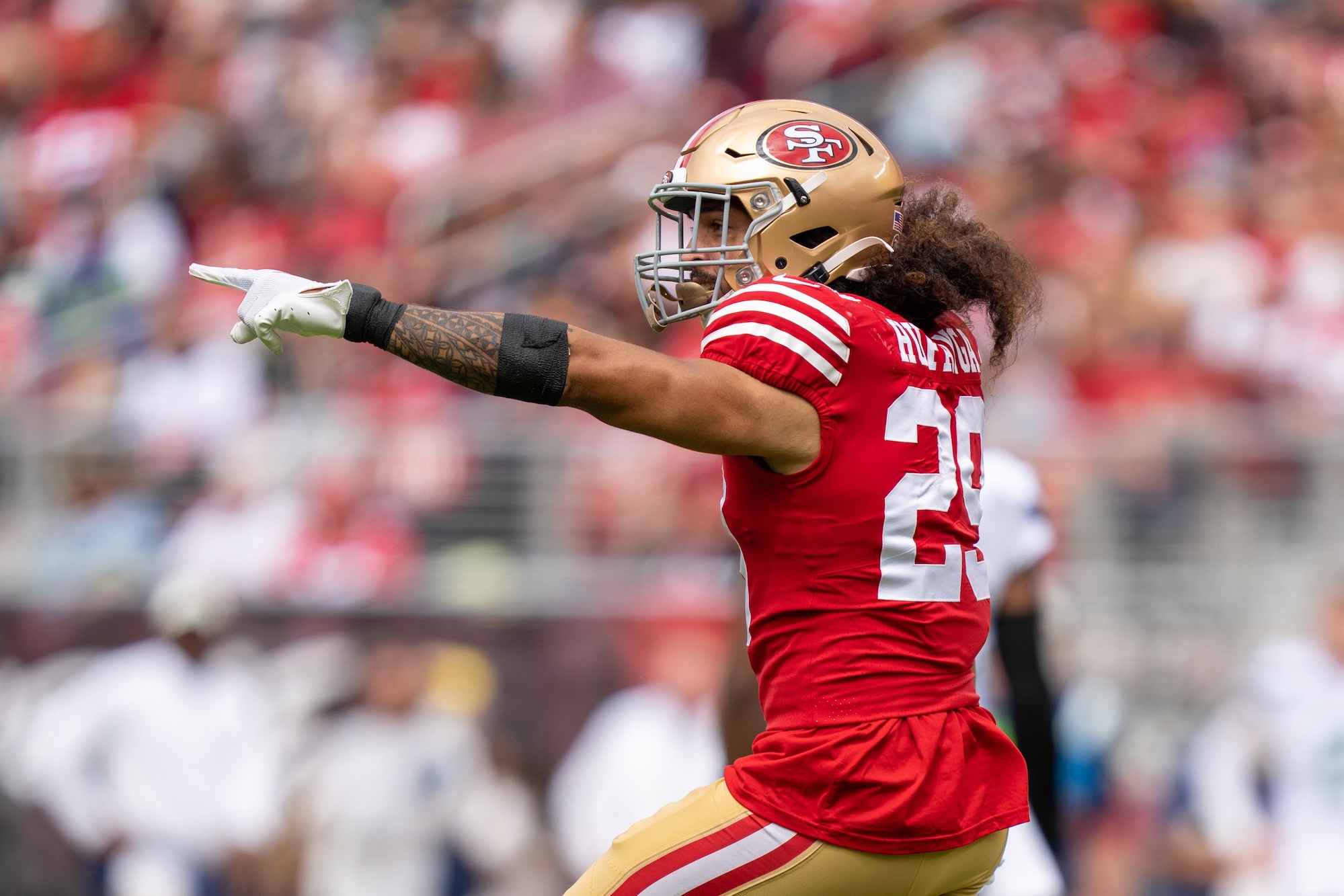 The San Francisco 49ers put forth a dominant defensive performance in Monday’s 24-9 victory over their rival Los Angeles Rams. That marks seven consecutive regular-season victories for the 49ers over the Rams. San Francisco’s haunting defense held the Rams to nine points and just 257 total net yards while forcing two turnovers. 49ers safety Talanoa Hufanga was the star of the show. Hufanga secured the win with an electric 52-yard fourth-quarter pick-six that extended San Francisco’s lead to two scores. Hufanga made an excellent read on the play.

TZZ UP FOR BIG HUF

The 49ers feasted on the Rams’ struggling offensive line. Nick Bosa racked up 14 pressures of Matthew Stafford. Bosa spearheaded a defensive front that sacked Stafford seven times while hitting the Super Bowl-winning quarterback 11 times. Their control of the trenches forced the Rams into an offensive shell. Rams head coach Sean McVay responded by calling screens, quick passes, and max protection play-action attempts. Hufanga stepped in front of Cooper Kupp and pounced on an opportunity near the line of scrimmage.

The No. 180 overall selection in the 2022 NFL Draft, Hufanga ranks third on the team in total tackles (25) and tackles for loss (4.0). Hufanga leads all 49ers defenders in passes defended (4) and interceptions (2). He’s blossoming into a superstar right before our eyes.

Hufanga has flawlessly stepped into a full-time starting role this season. General manager John Lynch showed unwavering faith in Hufanga by opting against signing a veteran safety this offseason. The 49ers allowed safety Jaquiski Tartt to depart the franchise in unrestricted free agency and immediately handed the keys to Hufanga. Lynch’s gamble has paid off.

Through four contests, the 49ers’ defense ranks first in the league in points allowed per contest (11.5) and yards allowed per game (234.5). San Francisco’s defense is a balanced unit. They’re second in both passing yards allowed (161.3) and rushing yards afforded per game (73.3). The 49ers have forced six turnovers through four games. Hufanga’s ascension has been a massive contributor to San Francisco’s dominance.

49ers defensive coordinator DeMeco Ryans is viewed as a head coaching candidate on the rise and he’s currently adding to his already stellar resume. Ryans has showcased a terrific understanding of how to best utilize Hufanga’s all-around skill set. The 49ers are using Hufanga in a variety of manners.

Hufanga has been at his best when the 49ers utilize him in his typical box-safety robber look. Hufanga has been surprisingly versatile, however. He’s covering opposing receivers one-vs-one. He can line up in single-high coverage looks. There’s nothing Hufanga isn’t doing for San Francisco’s defense.

It’s been the continuation and expansion of what Hufanga displayed as a prospect at USC. Hufanga is a violent tackler that plays with an impressive amount of physicality. Hufanga is aligning in multiple spots for San Francisco’s evolving, forward-thinking defense. Hufanga’s high-level football IQ allows him to play a hybrid-like role on the second level. Hufanga has gotten better in every area as a sophomore.

Talanoa Hufanga’s play recognition and overall awareness have been routinely on display. Pro Football Focus currently ranks Hufanga as the best safety in the league through four contests. It’s tough to argue with the results.