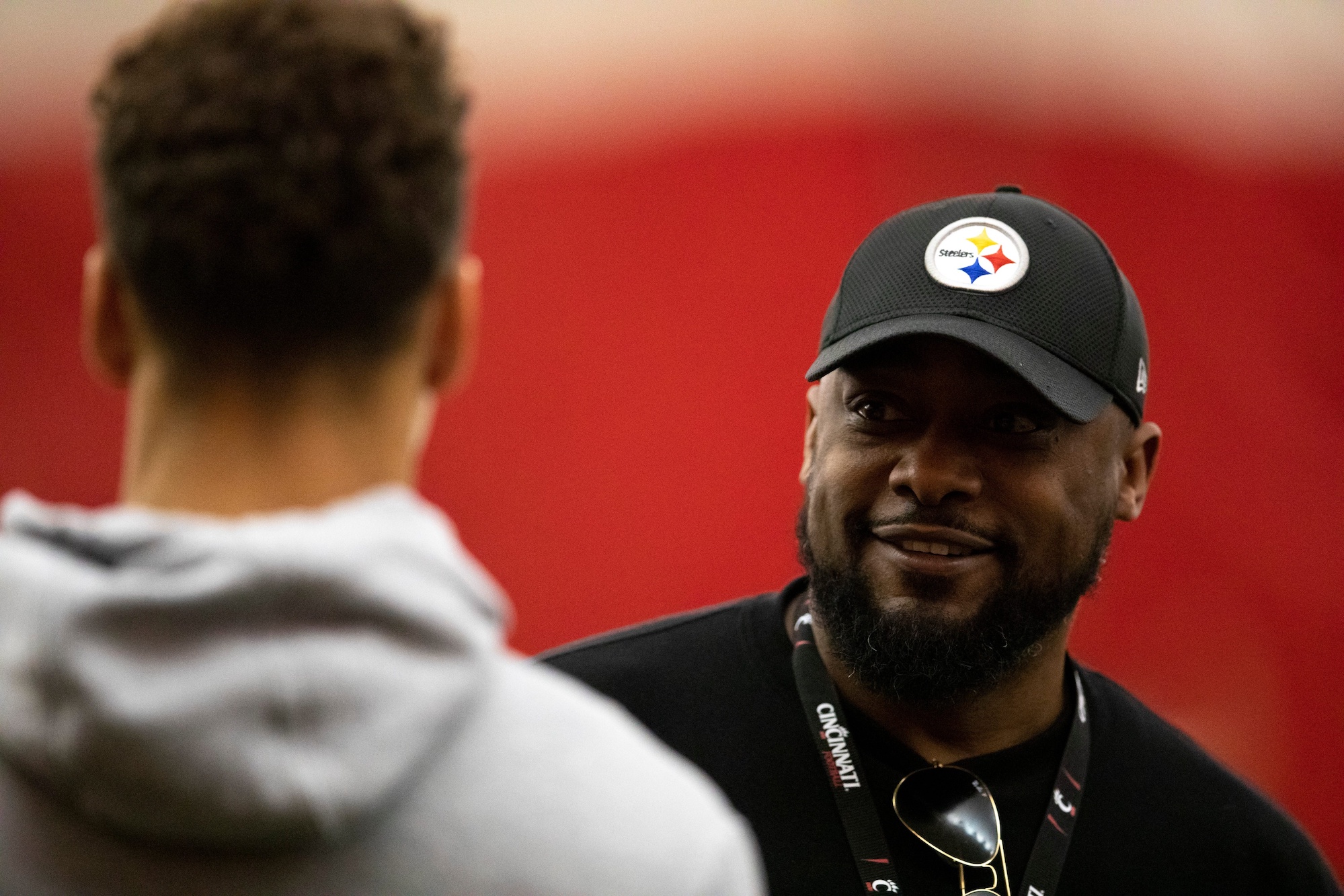 The Pittsburgh Steelers may still be searching for a long-term solution at quarterback. The retirement of Ben Roethlisberger plunged the Steelers into the signal-caller market. According to multiple reports, Cincinnati quarterback prospect Desmond Ridder will visit the Steelers’ facility for a Top 30 in-person visit on Thursday. North Carolina’s Sam Howell will visit on Friday.

General manager Kevin Colbert swiftly agreed to a two-year contract with Mitch Trubisky at the beginning of free agency. Trubisky joins a quarterback room that already includes Mason Rudolph, who had previously signed a one-year extension ahead of the 2022 campaign, and former first-round bust Dwayne Haskins, who was slapped with an original-round restricted free agent tender in early March. Despite rostering three signal-callers, the Steelers are still showing interest in the 2022 NFL Draft class of quarterbacks.

In a class stacked with hundreds of talents, NFL franchises are limited to welcoming just 30 of them for in-person visits. The Steelers have decided to use at least two of those opportunities to get to know two of the top quarterback prospects on a more intimate basis. It signals their legitimate interest in drafting a quarterback with the No. 20 overall selection despite having Trubisky, Rudolph, and Haskins in the fold.

The Steelers must utilize the visits to identify which signal-caller they are most compatible with. Both Ridder and Howell are schematic fits in Matt Canada’s offense, but the Steelers could choose to target Ridder in the middle of the first round.

Canada’s west coast offense places a ton of emphasis on pre-snap motion, window dressing, run-pass options, manufactured throws, and play-action, to single out a few of his tendencies. Canada’s offense was held back by the lack of a mobile quarterback in 2021, as the aging Roethlisberger was a poor fit to operate what Canada wanted to accomplish offensively.

A four-year starter for the Bearcats, Ridder is an exceptional runner that possesses outstanding vision and athleticism when escaping the pocket. Ridder’s dual-threat ability would allow Canada to open up his playbook in a manner that was impossible to do with Roethlisberger under center last season. Ridder ran the fastest 40-yard dash time (4.52) of any quarterback during this year’s NFL Scouting Combine.

With Ridder in Pittsburgh, Canada’s offense would be well set up to move the pocket and execute the layered routes, run-pass tendencies, and pre-snap throws Canada originally intended to center his offense around. Ridder’s ideal measurements and lack of physical limitations, when paired with his impressive overall athletic ability, could make him a target for the Steelers. Placing Ridder in a backfield that already possesses ascending running back Najee Harris would place stress on opposing defenses via Canada’s preferred run-pass-option game.

It’s the type of offense Ridder could operate at the next level, and the Steelers are a fit for various other reasons. Having played at a program like Cincinnati and for a disciplined, organized leader in head coach Luke Fickell, it’s easy to envision Ridder immediately clicking with head coach Mike Tomlin and the Steelers’ organization as a whole. Ridder has been battle-tested throughout his tenure as a Bearcat and he’s handled himself in an extremely mature manner throughout this pre-draft process.

These underrated factors won’t be lost on Colbert and Tomlin, who desire strong-minded leaders to quarterback a franchise that’s rich in history. Going beyond the athletic and schematic fits, which are ideal on paper, Ridder is a good human-being fit for the Steelers.

The Steelers desire an athletic quarterback that’s capable of operating Canada’s offense. Placing Ridder in a sound infrastructure in a run-first offense is an ideal fit for all parties involved. Tomlin and Canada want to run the ball at an extremely high and efficient level, and Ridder’s presence could help them achieve that.

Regardless of who’s under center next season, Pittsburgh’s offense will run through Harris. The first-round running back is a star-in-the-making and the Steelers will continue to utilize him at a high clip. The free-agent signings of offensive linemen James Daniels and Mason Cole help further signal Pittsburgh’s run-first intentions. Ridder is an excellent fit from every aspect.

Colbert and Tomlin are doing their extensive homework on this year’s quarterback class. With Ridder coming into town on Thursday, the Steelers’ front-office brass will receive an opportunity to critically examine Ridder the person beyond what they’ve identified on tape. Should that process move forward as imagined, Tomlin, Colbert, and the Steelers may identify their next franchise quarterback on Thursday evening.