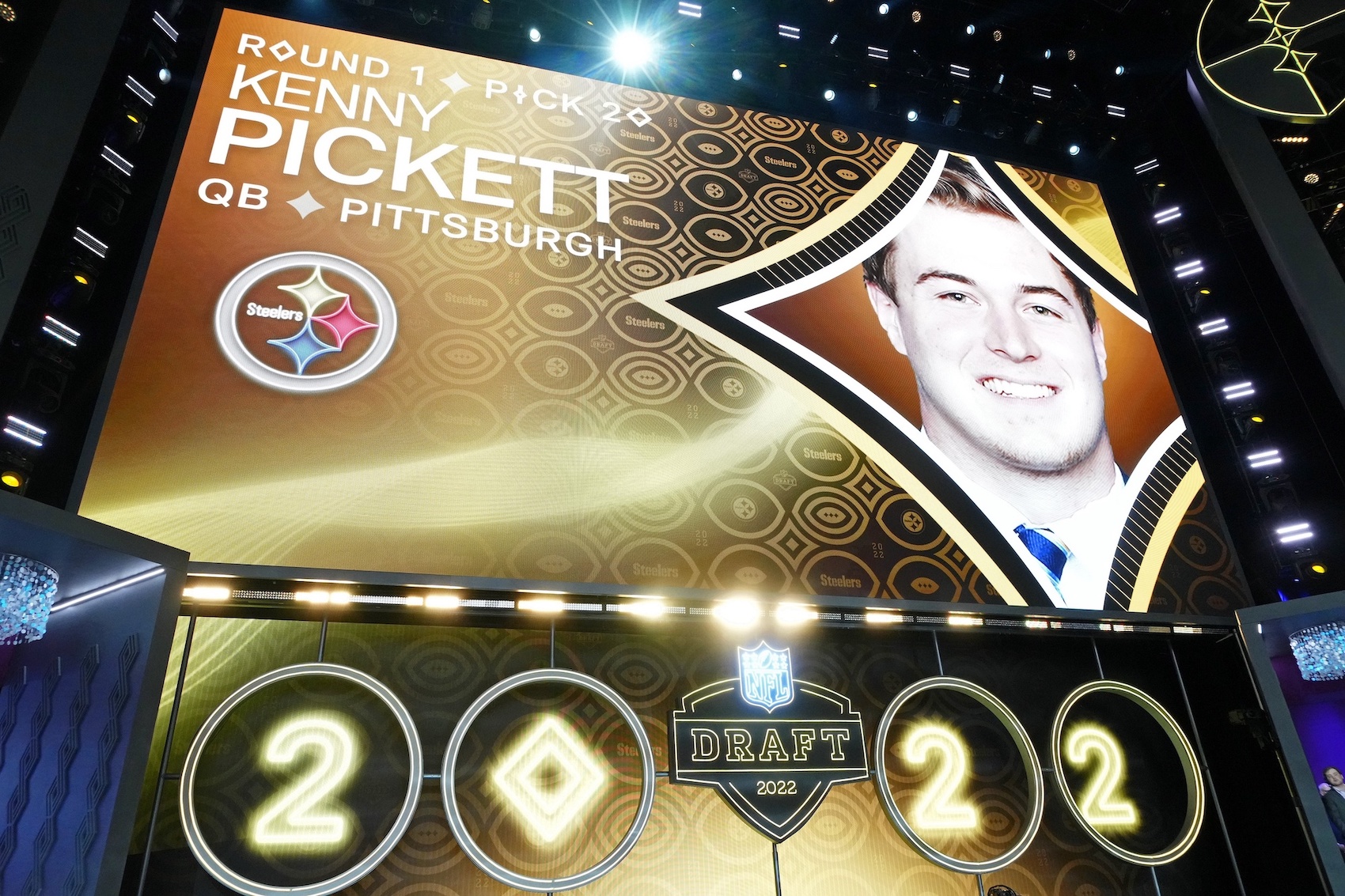 For the first time in 18 years, the Pittsburgh Steelers will exit draft night without Ben Roethlisberger as their franchise quarterback. Head Coach Mike Tomlin and General Manager Kevin Colbert have had the luxury of always having a franchise quarterback, allowing them to consistently target talented position players and build a competitive roster—one that has long been one of the best in the NFL. Now, without Roethlisberger, the Steelers are forced to find their new quarterback of the future while also still having to address many other needs as they hope to keep pace with their division rivals as well as an ultra-competitive AFC. Let’s take a look at what the Steelers did during draft weekend and see how their picks fit in with the team in the form of Steelers 2022 draft grades.

The Steelers get their heir apparent to Big Ben with this pick. Kenny Pickett was my QB1 all throughout the process and I believe this is great value for the Steelers and a terrific fit. Obviously, with Pickett playing his college ball at the University of Pittsburgh, the Steelers are extremely familiar with him and must feel very good about not only the player but the person.

Pickett is an extremely accurate quarterback who is also an excellent decision-maker. He throws with touch, timing, and anticipation and takes extremely good care of the football. Expect Pickett to battle it out with free-agent acquisition Mitch Trubisky for the starting job and ultimately expect Pickett to win that battle and be the Steelers’ quarterback under center in Week 1.

The Steelers allowed JuJu Smith-Schuster and James Washington to leave during free agency and there are other issues with Diontae Johnson’s looming contract extension as well as rumors of the team not being as high on Chase Claypool as some may think. Adding a receiver was a massive need for Pittsburgh and to be able to land George Pickens in the middle of the second round is a home run.

Had Pickens not torn his ACL in the spring of last year and been able to play a full season, he would have likely been a first-round pick. Pickens is a long and athletic receiver with outstanding hands and ball skills. An alpha type on the outside, Pickens is excellent at catching over the middle and in 50-50 situations. His competitive toughness should fit right in with the Steelers’ culture, and I expect him to have an immediate impact on this offense.

A bit of a high-risk, high-reward pick here for the Steelers. Leal entered the season with a ton of hype and was consistently mocked not just in the first round but in the top 10. Leal is an athletic defensive lineman who flashes high-end pass rush potential as an interior rusher. He is an explosive athlete with an ability to bend for a bigger man. His issues arise in the run game where his lack of power and anchor get exposed against bigger and more physical offensive linemen. The Steelers have an old defensive line with veterans Cam Heyward, Tyson Alaulu, and Stephon Tuitt, so getting younger here makes a ton of sense.

Another receiver for the Steelers here, Calvin Austin III is a different type of receiver than the one they got in Pickens. Austin is an undersized receiver at just 5-foot-7 and 180 pounds but is an absolute speed demon, running an official 4.32 40-yard dash at the NFL Scouting Combine. Due to Austin’s lack of size he likely will find his home as a full-time slot receiver in the Steelers’ offense and that’s perfect considering Smith-Schuster played from the slot a majority of the time.

For a smaller receiver, Austin has outstanding ball-tracking ability down the field and is extremely difficult to bring down. He will be used in the quick game and will be a weapon returning kicks and punts, where he was extremely productive in college. The Steelers have a history of being able to nail their receiver picks and I believe they did so again this year in Pickens and Austin.

What is up with the Steelers and having brothers on their team? First it was Terrell and Trey Edmunds, then it was Derek and T.J. Watt, and now it’s Cameron and Connor Heyward. Connor Heyward is a very versatile player having played both running back and tight end in his collegiate career. He was a running back at first before adding weight and making the switch to tight end, where he was productive in his final year as a Spartan.

For the Steelers, he projects as a move piece for Offensive Coordinator Matt Canada and will be deployed to create favorable mismatches/ Expect to see him in the backfield with Najee Harris and also in the slot as a Swiss army knife in this Steeler’s offense.

A former running back, Mark Robinson is a raw player but one that comes with some upside at the linebacker position. Robinson has only been a linebacker for one season, but he showed enough in that one season to warrant a draft pick. He is a good athlete who is able to play sideline to sideline and has good strike when he tackles the ball carrier. He projects as an inside linebacker in this Steelers defense and will likely be a special teams ace while he continues to develop under new linebackers coach Brian Flores.

It was a bit of a surprise to see the Steelers take another quarterback, especially when you consider they still have Mason Rudolph on the roster after already adding Trubisky in free agency. Chris Oladokun is a highly productive player who has some very intriguing tools possessing a big arm and excellent mobility. He projects as a practice squad quarterback in year one but could develop into a quality long-term backup.