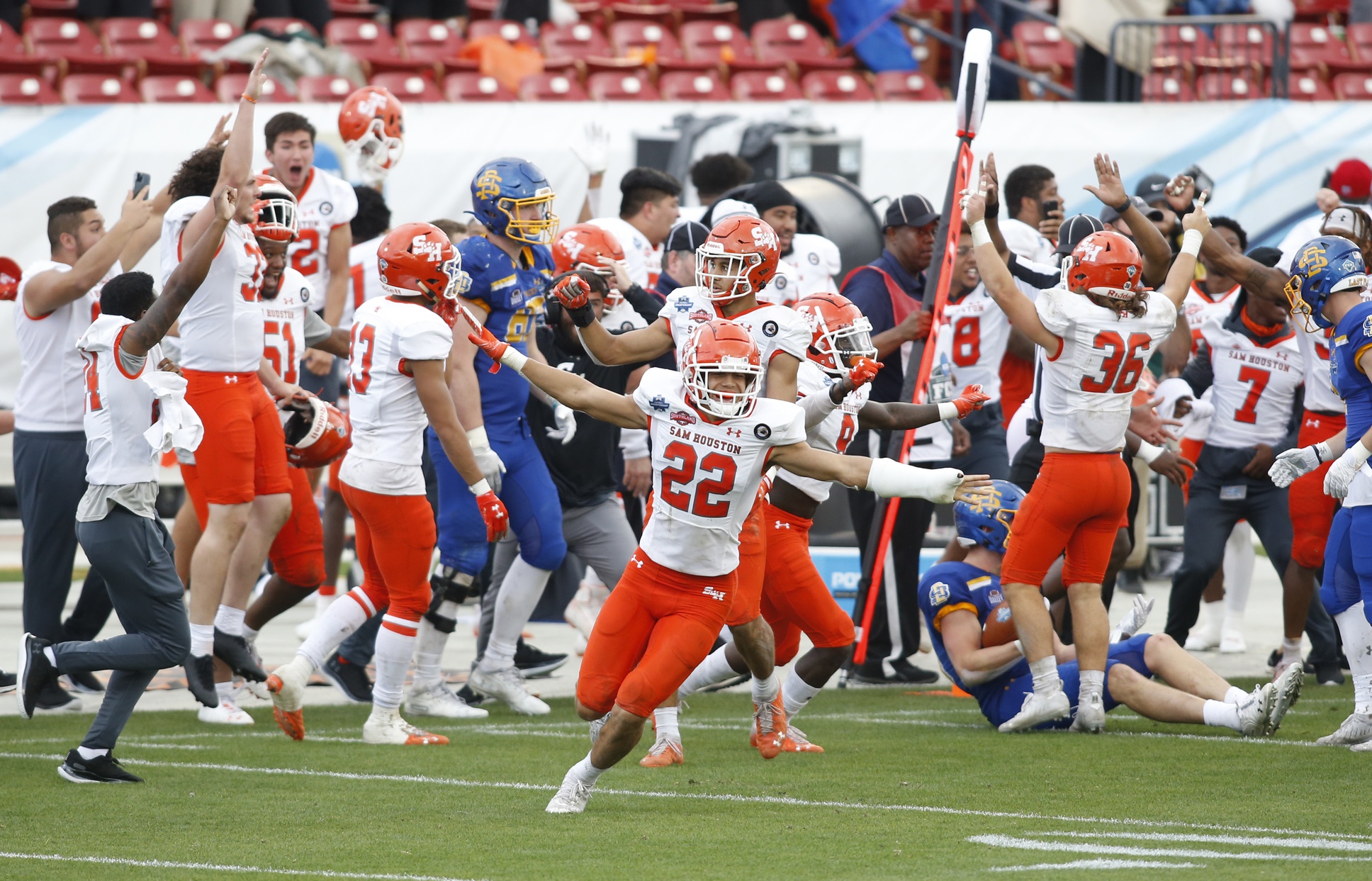 McCollum has impressive turn-and-run skills for a corner of his stature. Doesn’t easily concede leverage in routes and he uses his frame to his advantage. I would not call him a natural pattern-matcher and his anticipation skills have room for growth.

McCollum is an aggressive player in coverage that likes to make plays on the ball. He is a willing defender in run support but he has to tackle better. His frame is a bit wiry and he’d benefit from adding bulk and functional strength.

McCollum had exceptional ball production in college and is aggressive to make plays at the catch point. He has a nose for finding the football and making plays. His ability to stay leveraged leads to chances to break on the ball and he is positioned well to snag the ball off deflections.

Zyon McCollum was a standout for Sam Houston State and is fully on the NFL’s radar with an invitation to the Senior Bowl. He brings good size, speed, and terrific ball skills to the table. When it comes to his ability to make plays on the football, the numbers speak for themselves. He collected 13 interceptions and 54 pass breakups in 56 games in college. He is disruptive at the catch point due to his natural ball skills, athleticism, and ability to stay leveraged. For a tall corner, I am impressed with his ability to turn and run and he is a willing contributor in run support. When it comes to concerns, McCollum has matchup restrictions in man coverage and shouldn’t be tasked with regular reps on off-man coverage. He has to become a more consistent tackler—as things stand, he has a tendency to aim high and fall off too many attempts. I also believe he has room to grow when it comes to route-anticipation skills in addition to proving himself against top competition. McCollum should be an attractive developmental target for zone-heavy defenses.

Zone Coverage Skills: McCollum has an ideal skill set for zone coverage duties where his size, length, and ball skills can be fully maximized. He does a great job of reading the backfield and working into throwing lanes. He is comfortable working from the half-turn and staying leveraged.

Tackling: McCollum needs to clean up his tackling technique. He aims high and doesn’t warp with consistency, which leads to him falling off attempts. I was left wanting more from him as a tackler, especially given his frame. He doesn’t offer the tackling radius expected for his stature.

Versatility: McCollum is likely an outside zone corner in the NFL but can situationally hold up in press-man. I would not want him playing regular snaps in off-man coverage and his ability to contribute in run support is below average.

Functional Athleticism: McCollum is a smooth operator for his size and I’m impressed with his ability to turn and run. He is high-hipped which leads to some segmentation when changing directions, but he’s fairly explosive. Twitchy wideouts could give him some challenges but he matches up well with height/weight/speed guys that can get vertical.

Football IQ: McCollum is generally a sound processor. I do believe he has room to grow with route-anticipation and adjusting his landmarks in coverage when necessary. He has good spatial awareness and has a knack for getting his hands on the football.

Run Defending: I like the way McCollum fits the run but he needs to find more consistency as a tackler. He is willing to trigger and close but he has to do a better job of getting himself in good positioning to finish. He has sufficient ability to play off contact.

Length: McCollum has good length but less than expected given his height. His length does show up in coverage, especially when playing the ball in the air. It does not show up when he tackles.