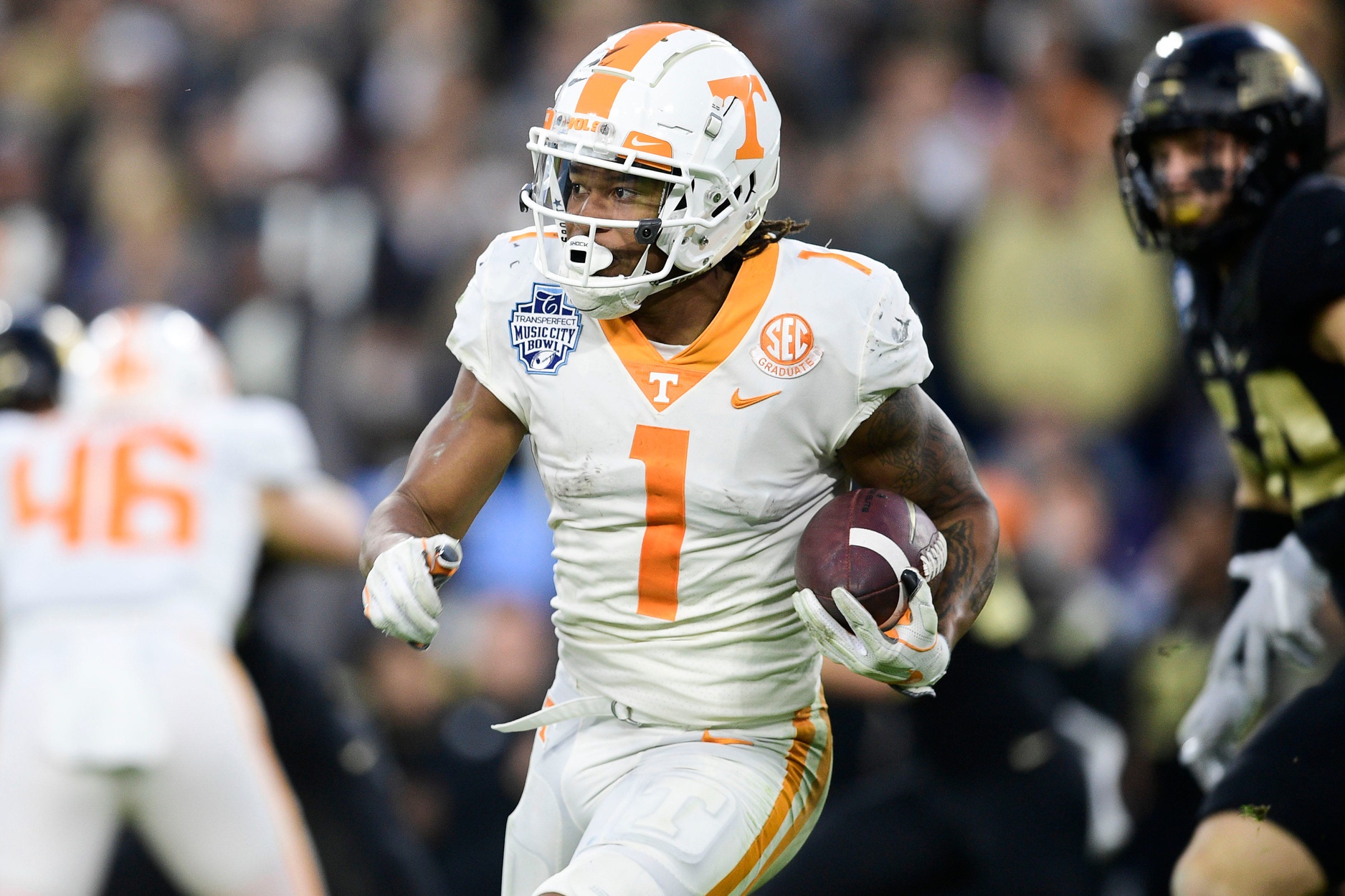 The hope for big plays with Jones is his speed and ability to create for himself after the catch. While he has been efficient with targets down the field, he hasn’t commanded many of them in college. Jones has proven able to create explosive returns.

Jones offers value as a slot receiver and return guy. I have also come away impressed with his effort as a blocker. I have reservations about him being a true multi-level threat given his route-running technique and what he was asked to do in college.

Velus Jones Jr. enters the NFL after six seasons in college football, spending 2016-2019 at USC and 2020-2021 at Tennessee. He earned his undergraduate degree from USC and completed his masters at Tennessee. Jones Jr. leaves college football after assembling his best season where his role in the offense led to the most opportunities for his career while continuing to expand his resume as a returner. Tennessee played Jones Jr. primarily in the slot with most of his targets coming within 10 yards of the line of scrimmage, often taking advantage of the offensive spacing with mostly manufactured touches. Jones Jr. is talented with the ball in his hands and a considerable amount of his production comes after the catch, where his speed, vision, and contact balance shine. With that said, Jones Jr. has not been tasked with running a diverse route tree and the routes he does run are measured with high step frequency and rounded breaks. For a prospect that will turn 25 before the start of his rookie season, it’s fair to be concerned about how much he truly offers at the position and how much better he can be given his modest role throughout his college career. Jones’ speed and ability with the ball in his hands is appealing, but ideally he would check a lot more boxes.

Route Running: Jones was only tasked with a simple route tree at Tennessee and there is notable development needed not only from the perspective of proving he can run a more diverse tree, but improving his overall technique. His route breaks are rounded and he coasts through turns. His step frequency is notable, leading to choppy and extra stems throughout his stem and through breaks.

Hands: Jones hasn’t had many issues with drops throughout his career or from my exposures. He appears comfortable plucking the football, securing it, and getting to work after the catch. His utilization doesn’t lead to challenged catch points or the necessity to make grabs outside of his frame.

Separation: Jones has the speed necessary to run away from coverage but his route-running technique needs improvement to become a more consistent separator. His routes lack deception and he isn’t crisp in and out of breaks. His best chances to create separation come on the vertical plane given where he’s at as a route-runner.

Release Package: From my exposures, Jones was primarily a slot receiver and had the opportunity to take advantage of extended runways to get into his route. With that in mind, there weren’t many instances where he was challenged with press coverage and I haven’t witnessed much in the way of variance with his releases.

Run After Catch: This is where Jones Jr. brings most of his intrigue to the table. His post-catch production has been notable and it translates to why he’s been so good as a returner. Jones is explosive and he makes timely cuts, which enables him to create for himself. Jones has good contact balance and 2021 saw plenty of defenders falling off their attempts to tackle Jones.

Ball Skills: Jones Jr. wasn’t afforded many chances to track the ball down the field, but on those deeper targets he did look comfortable tracking and adjusting to the football in the air. His tape doesn’t feature many contested-catch points and catches—based on his utilization, it’s unlikely to be a strength of his game. He isn’t likely to be a weapon that routinely extends his catch radius.

Football IQ: Jones Jr. seems to have good spatial awareness from my exposures. The biggest indictment on concerns with football IQ are rooted in the modest route-running technique he showcased in 2021 despite it being his sixth season. He has a lot to prove about the full breadth of his skill set.

Competitive Toughness: Jones is an impressive competitor and it shows up with how he blocks and competes with the ball in his hands. Jones isn’t shy about squaring his pads and challenging defenders with good contact balance.