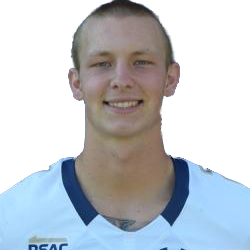 Shepherd quarterback Tyson Bagent projects as a developmental quarterback at the pro level. He’s been superbly productive for the Rams program across his collegiate career, posting monster numbers and giving opposing defenses fits with his ability to get outside the pocket and attack all levels of the field. Bagent is going to be a project for an NFL franchise, but he should be a fun one with his natural ability as a passer.

Originally unranked as a college recruit, Bagent played his high school football for Martinsburg High School in Martinsburg, WV. He enrolled at Shepherd in 2018 and has since completely re-written the program passing records with a prolific NCAA career. He started as a true freshman in 2018 and has started every game for the program since, posting a total of 53 starts. His 159 career touchdown passes are an NCAA record regardless of division and he was the 2021 Harlon Hill Trophy winner, the D-II equivalent of the Heisman.

Bagent has a live arm—that’s the first thing that pops for him on film. You see great pop of the ball off his hand from all different kinds of angles and platforms. He’s a very loose and fluid thrower who doesn’t operate with consistent timing but instead tries to manipulate both the pocket and defensive backs with his pocket movement and eyes. He’s a fairly challenging study from this perspective as teams that looked to bring any kinds of pressure gave his protection unit fits, be it from stunts, fire zone pressures, corner blitzes, or mugged linebackers. It felt as if he was facing free runners bearing down on him every other snap. The upside to these conditions is that he’s developed a savvy for extending plays and forcing rushers to miss. He’s capable of buying himself time and is big and strong enough to take some contact and still find an opening.

He’s a tough kid in the pocket; he’ll stare down the barrel and take some big hits before popping up quickly. I appreciated his aggressiveness as a passer in one-on-one situations. He clearly established chemistry with some of his targets and was willing to let them make a play for him on the perimeter—he took a lot of back-shoulder throws to the field with ambition and manufactured some big plays as a result. Bagent has quick ball-handling skills and his looseness as a passer allows him to throw around the back or around defenders and quickly slot windows when he illustrates a feel of voids in coverage to get the ball out fast. Shepherd let him get outside the pocket and throw on the move well, which served him well when throwing routes to the sideline.

All of the likable reps and qualities that Bagent exudes come in spurts. They can be irregular at times, in part because of his conditions and supporting cast, but in other cases just on account of too much inconsistency in his own game. His delivery, his footwork, and his progressions are all a work in progress that will benefit from a more deliberate approach on a snap-by-snap basis. You’ll see him sidearm a throw out to a hitch that is on the money but then he’ll throw a sinker ball into the flat from a clean base in the pocket. He just needs to start stacking reps together for repeatable motions unless he’s forced to do otherwise. I felt like Shepherd gave him a lot of schemed throws and it didn’t allow him to necessarily always find the open target in the progression—instead looking too long at the primary option or getting stuck on the iso side of the field. These habits can take time to break and I think consistency in his progressions as a passer will be his biggest test in how close to his ceiling he ultimately goes.

Expectations for Bagent early in his NFL career should be low. He’s facing a significant jump in the level of competition and he is unlikely to be ready for live NFL action early in his pro career. But given the time to marinate and develop, there’s going to be an opportunity for an NFL team to secure a quality quarterback. He’s got the traits to play in the league and potentially be a long-term backup, but he’d be best off being protected as a team’s third quarterback for his first season.

Tyson Bagent NFL Draft Scouting Report. Add him to your big board here.