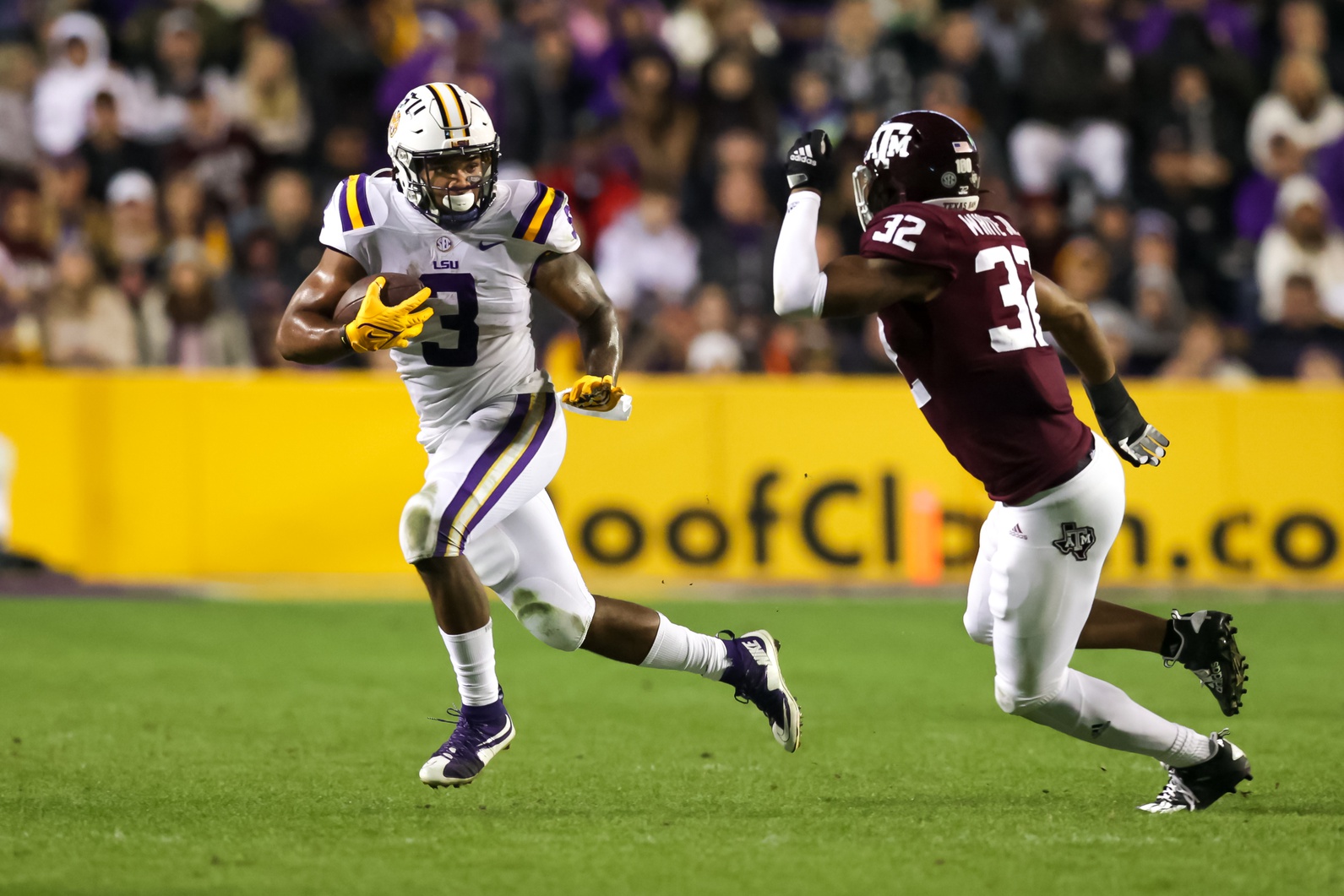 This player runs with a forward lean. While it assists him in running through defenders, it affects his ability to keep his balance. Working to the second level, Davis-Price likes to run behind his pads and runs with a heavy forward lean that puts his body off balance. This results in him going down easily from arm tackles and being tripped up because his body is already off-balance from his forward lean.

Tyrion Davis-Price committed to the in-state Tigers over a bevy of top football programs like Alabama, Georgia, and USC. Davis-Price played sparingly early in his career and then transitioned into a running back by committee situation at LSU, which resulted in low production for Davis-Price. In the 2021 season, Davis-Price was named the starter and it proved to be his most productive year. Davis-Price ran for more than 1,000 yards and had an average of close to five yards per carry. His best game came against the Florida Gators in which he ran for 287 yards and three touchdowns. During his time at LSU, there was a lot of inconsistent play from the offensive linemen and it affected Davis-Price’s play. Davis-Price is a downhill back that punishes defenders that attempt to tackle him. Davis-Price also showed that he has enough speed to take the run the distance when he is in the open field. This is a player that has some athletic traits and would lean into the thought that he will have a more productive NFL career than college. In the NFL, Davis-Price will be best served to play in a power run scheme that allows him to get behind his pads.

Vision: At LSU, Davis-Price played in a running scheme that ran both zone and power run concepts. On zone runs, Davis-Price mostly works the frontside of the run and will either commit to a hole early in the run or stretch it all the way to the sideline. In power run schemes, Davis-Price keeps it simple by hitting the hole that the play was designed for. Overall, Davis-Price has adequate vision and will follow the design of the called play.

Footwork: Behind the line of scrimmage, Davis-Price showcases quick feet and can make an explosive lateral jump cut to make a penetrating defender miss. After this cut, it usually takes Davis-Price an extra step to regain his balance to try to get his base under him, which results in the second defender tackling him. He operates best when he has a runway and he can get vertically up the field.

Durability: This is Davis-Price’s first year being the primary back, so he is a fairly fresh running back. Throughout this career he has battled little nagging injuries to lower extremities but nothing of significant concern. Davis-Price invites contact and is a battering ram, so that should be considered in regards to the longevity of his career.

Versatility: Davis-Price’s play style and limited open field change of direction make him primarily a traditional running back, At LSU, they sparingly aligned Davis-Price at receiver but there is no real production from him there. In the passing game, Davis-Price is most effective at chip-blocking and leaking out of the backfield to become a receiver or catching swing routes out of the backfield.

Elusiveness: This player is most elusive behind the line of scrimmage. He can use his explosive jump-cut to maneuver from one hole to another when he is finding a crease to penetrate. Once he gains momentum in the open field, Davis-Price is comfortable making slight angled cuts to change the angle and tackling surface that defenders have and then powering through arm tackles.

Ball Security: Ball security appears to be a trait that he has to improve on. In his first season as the primary back, Davis registered a couple of fumbles. These fumbles appear to be centered around technique and concentration—both can be improved on.

Passing Down Skills: In pass protection, Davis-Price has proven to be a high-IQ player. He is good at scanning for second-level defenders and rarely misses an assignment or executing the block. As a receiver, Davis-Price runs a limited route tree that entails mostly swing routes or delayed releases into the flats. He has shown to be an adequate catcher of the football, he just lacks the ability to make people miss in space to make him a weapon in the passing game

Discipline: As a runner, this player sticks to the design of the play, which can lead to positive and negative outcomes. The positive is that he runs the design that is called and you know exactly where he will be. But the negative is that he may pass up cut-back opportunities and holes that are created unconventionally.