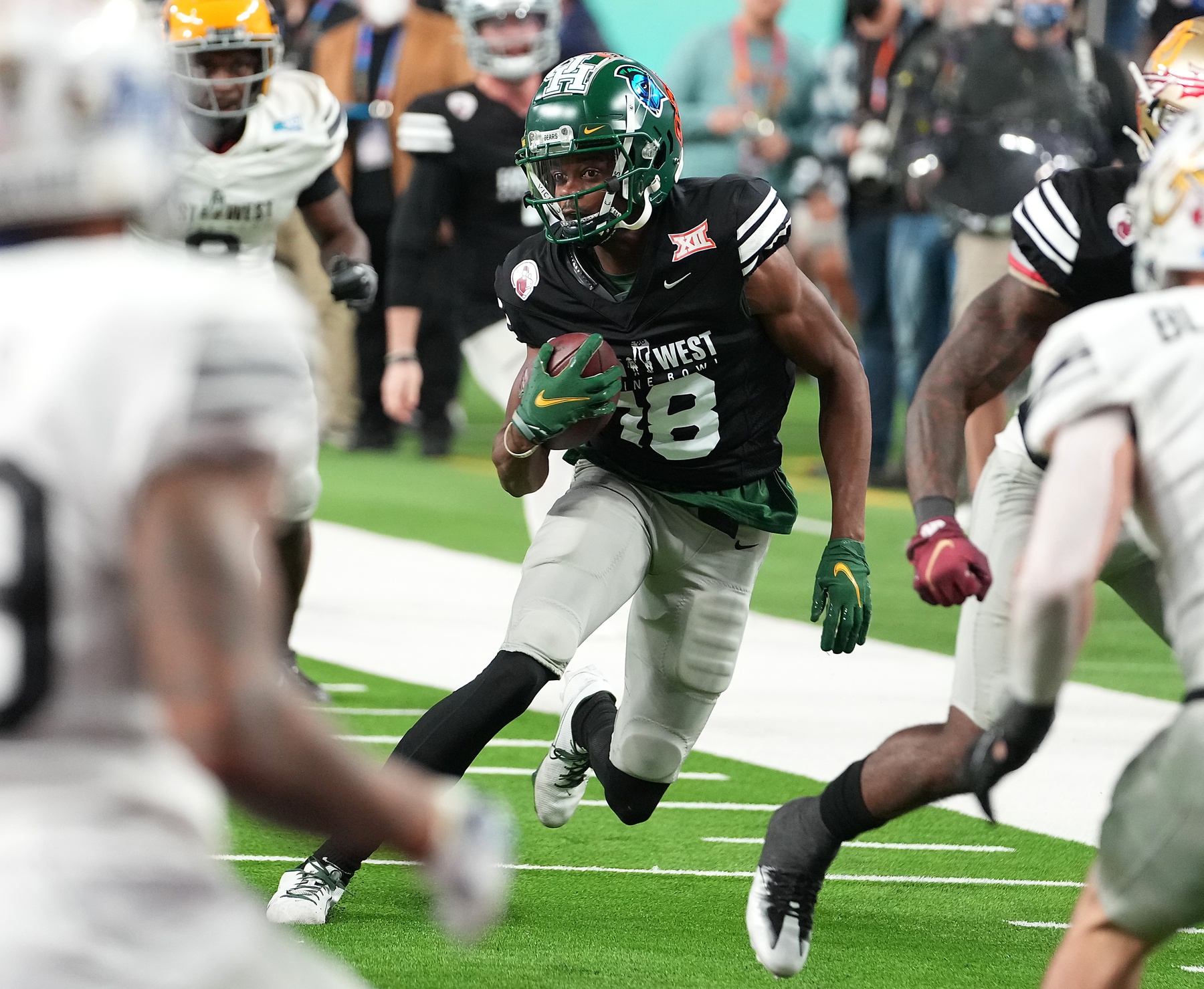 This player has exceptional speed that is shown when he has to run deep routes. He has the down-the-field speed to simply run away from defenders and put distance between himself and the defender. He has an electric burst that allows him to separate easily and put defenders in complex situations.

This player has shown to have pretty good ball skills. He does a good job of tracking the deep ball and is able to catch the ball in stride and immediately accelerate. He didn’t make any spectacular catches, but overall he’s a good natural receiver.

Thornton has a tremendous amount of big-play ability. He has speed to flat-out run away from defenders and can take the top off any zone. He is a long strider that builds momentum and eats up grass quickly. Thornton has speed that will need to be accounted for in the NFL—he’s a threat to score on any play if defenders can not keep up with his speed.

Tyquan Thornton is a former 3-star recruit for the state of Florida. Thornton chose the Baylor Bears over other in-state schools such as Miami, Florida, and FIU. Thornton is a senior that struggled to see significant playing time until this year (2021). The 2021 season saw Thornton’s production on the field skyrocket. Thornton finished the season with 60 receptions and 10 receiving touchdowns. Thornton showcases electric speed and can seemingly run past any defender that is put in his way. Thornton uses long strides to simply glide past defenders and uncover to make himself available for the quarterback. In the NFL, I believe Thornton will have instant value as a deep threat, and defenses will always have to account for where he is aligned because he is a big play waiting to happen.

Route Running: Thornton is a high-waisted athlete that struggles to sink his hips on certain routes. Thornton can effectively sink his hips and work back to the receiver on curl routes and hitches, but struggles to run in-breaking routes with precision. He runs his best in-breaking routes when he gets off coverage and he can threaten the defenders vertically and then break inside to make himself open to the quarterback.

Hands: Thornton is comfortable catching the ball away from his body. He shows the ability to extend his arms and give himself a wide catch radius. But while attempting to catch a ball in traffic, Thornton elects not to extend himself and chooses to let the body get into his frame so he can secure the ball and protect himself.

Release Package: Thornton doesn’t have a wide array of releases but he has a couple of effective ones that he uses in order to get an effective release. When he is getting a tight press look, Thornton likes to use a jump back release to get more space between him and the defender and then use his quickness to beat the defender. When he is getting an off coverage look, Thornton usually likes to use his quick burst off the line to quickly get in his route and make the defender bail due to his blazing speed.

Run After Catch: After catching the ball, Thornton likes to immediately get vertical to use his speed to outrun defenders. Thornton has great speed and acceleration so when he catches the ball in the stride he becomes a threat to score with the football. Thornton is not an elusive runner and has a fairly thin frame.

Football IQ: As a receiver, Thornton has a pretty good understanding of coverages. He showed that he can quickly identify zone coverage and find the holes to make himself available for the quarterback.

Versatility: At Baylor, Thornton aligns both on the outside and in the slot, but I think he is most effective when he is aligned as a boundary receiver. Thornton has a long lower half, which affects his quickness. Thornton is a strider that operates best when he can stretch the field on vertical routes.

Competitive Toughness: Thornton is a competitive player and it shows in his blocking. Thornton is a willing blocker that will work to effectively block his assignment. This also shows his unselfishness and doing what it takes for the team to win.