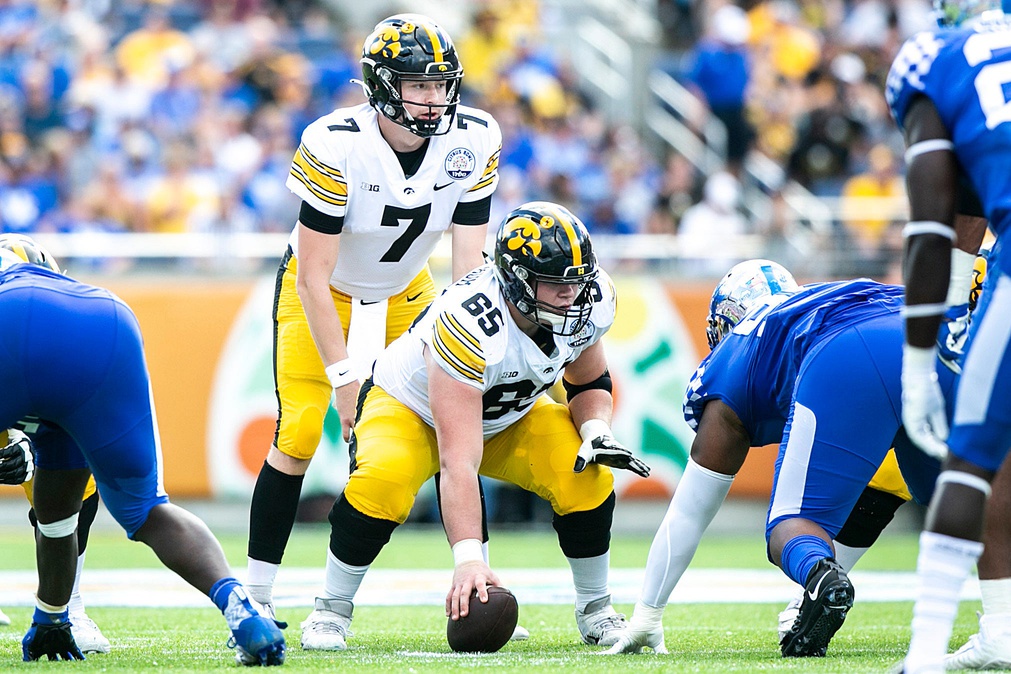 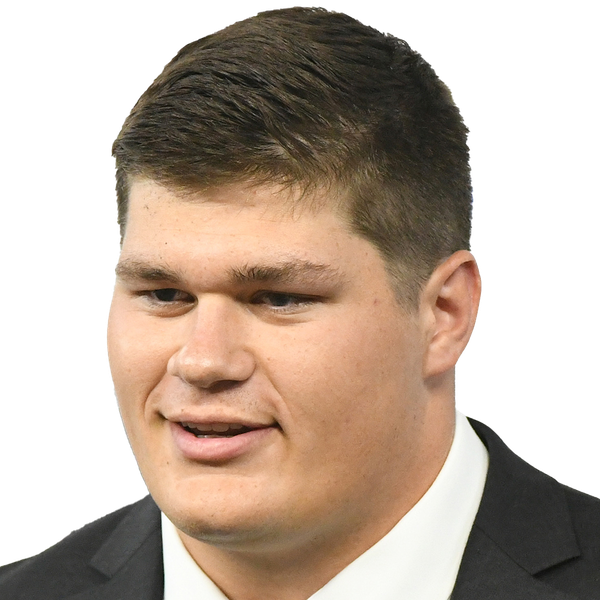 Linderbaum is an incredible natural athlete with high level movement skills in all phases. But his leverage at the POA and his balance in space are what can make him special.

There’s a lot of natural built-in leverage to win as the low man. As a result, his center of gravity is rarely disrupted, allowing him to stay attached on bodies. Power rushes are capable of rolling him back but his posture is almost never compromised, allowing him to absorb and catch the blow before sitting down and halting the rush. Movement skills in space are pretty special. He moves much better and adjusts in space as good as any center I’ve seen.

Linderbaum's stature is a limiting factor for some teams but his lateral range will allow him to serve as a wide-zone starter and give him a chance to be a key asset in the run game.

Fully capable of reaching 3T on outside zone reps. Linderbaum is very fluid in his lateral drive and his agility to redirect and close a gap versus delayed rushes or to help pass off a stunt exchange is seamless. He’s got little issue as an athlete in any situation and as a result, his range as a blocker in both pass protection and in run game landmarks will allow you to ask a lot of him in the NFL.

This skill is a bit of a mystery for Linderbaum, whose offense was certainly limited in what they can do in the passing game.

Opportunities for true pass sets aren’t quite at the same volume as most other centers coming from an offense that ran the ball at approximately a 57% clip in 2021 (55% run rate in 2020) and given the amount of play-action and screen game that is involved in the Hawkeyes’ passing attack. But in the instances when Iowa needed true drop back passing, Linderbaum showcased good footwork, excellent foot speed, and an effective level of anchor to sit down on rushes. You’ll have a hard time finding speed rushers who will give him fits at the next level; it is going to be more predicated on how he learns to adjust his strikes and secondary effort against high-level penetration speed/power combinations.

Iowa center Tyler Linderbaum projects as a high-level starting center at the NFL level. It does not appear as though Linderbaum has the functional skill set to be a positionally flexible player—I consider him a center-exclusive prospect coming out of Iowa, which may temper his value in the eyes of teams at the top of the NFL draft order. But for the product that you’re investing in, you’ll likely find Linderbaum to be well worth the cost. He is a highly polished, highly cerebral, and dynamic weapon on the offensive line that presents some unique traits that could make him a game-changer in the middle of your offensive front.

Coming into Linderbaum’s evaluation, I expected to regard him as a wide-zone-exclusive fit that would make sense for the coaches off the Shanahan tree. But in reality, Linderbaum offers better functional strength than some of his contemporaries, such as former NC State center Garrett Bradbury (2019 NFL Draft, Minnesota Vikings). Linderbaum, a former high school wrestler who came to Iowa City as a defensive tackle and transitioned to the offensive side of the football after his true freshman season with Iowa, has steadily developed and improved in all phases and now finds himself as the latest product of the Iowa Hawkeyes’ offensive line factory.

Linderbaum is still best projected to the Shanahan systems but I have enough belief in his tools that I wouldn’t consider him a scheme-exclusive candidate; he’s done well in his limited situations to handle high volume passing situations and has shown the ability to apply his wrestling background to sit down on rushes and anchor in the middle. But when you can run the ball and stay involved in the screen game, Linderbaum allows you to execute calls that are unique based on the landmarks you can ask him to hit relative to his peers at the position. I’d expect some level of growing pains early on given his stature and reach and learning to apply those things at the NFL level, but I do think in time this is a Pro Bowl-caliber center who should serve as an offensive line keystone for several contracts.

Competitive Toughness: I have a great appreciation for the tenacity that Linderbaum plays the game with. He’s clearly not the biggest or strongest, but his effort to stay framed on blocks and remain relentless with his effort in gaining ground or leverage is excellent. Linderbaum plays through the end of the whistle and his ability to finish blocks by finding free shots in uncovered pass protection, burying linebackers on the second level and running defensive linemen out of the frame is hard to miss. He plays the game at a million miles per hour and pairs it with good functional strength and excellent leverage.

Anchor Ability: The skill set here is modest given he doesn’t have the heavy hands to offset blows and you don’t get too many chances to see him sit down against full rushes given that the Iowa offense likes to run the football at a high clip and their passing game features plenty of play-action and screens. But when he’s forced into true sets and challenged with power, his ability to sit down is above average and his recovery ability to reset his base is very good.

Power at POA: Most of his forward push comes with double teams when you’re asking him to gain ground and create a bubble. He’s much more effective in zone reps to flip leverage and seal before anchoring and creating creases, but he does have a low built frame, and in short yardage the Hawkeyes asked him to lead the charge on QB sneaks on a number of occasions and found success. He’s not filled with raw power but I do feel as though he’s got the lower-body mass of a larger player and his leverage does afford him some luxuries at first contact and on second push.

Hand Technique: Linderbaum has got clamps for hands. Despite a lack of ideal reach and wingspan for the prototype, he’s a one-handed striker (snap hand is his right hand) and clearly showcases his wrestling background with the activeness in his hands and ability to continue to work and reset. His punch is tight and compact and that allows him to hit his strikes with accuracy and leave little room for mishaps in his initial effort to set his hands.

Football IQ: The play maturity he showcases despite a late transition to center from defensive tackle is impressive. He’s been steadily improving over each of the last three seasons and is clearly entering the pros as the best version of himself as compared to 2020. His time in the Iowa football factory will certainly do wonders for his onboarding process. He’s clearly active in communications ahead of the snap and showcases instincts and feel of both the pocket and adjusting his landmarks post-snap. This is a fundamentally advanced prospect beyond his years who offers teach tape on a weekly basis.

Versatility: He doesn’t have ideal length and that will likely bar him for having NFL positional flexibility. If he were to play guard, he’d ideally have more mass or more reach. At center, he’ll have plenty of help and most nose tackles aren’t going to challenge his quickness or natural leverage. He’s more scheme diverse than I anticipated, too. I think he can play in most systems. While gap/power systems may not best accentuate his strengths, his value in the passing game is hard to miss given his cerebral approach to protections, his quickness, and better anchor skills than you’d expect given his stature.

Flexibility: This is a prospect with a pretty rare level of body control for playing on the line of scrimmage. Effortless efforts to redirect and play on a dynamic base allow for spring in redirection situations and high-level recovery skills when engaged and his center of gravity is influenced. Ability to gear down and control in space makes him very challenging to account for and beat on the second level.