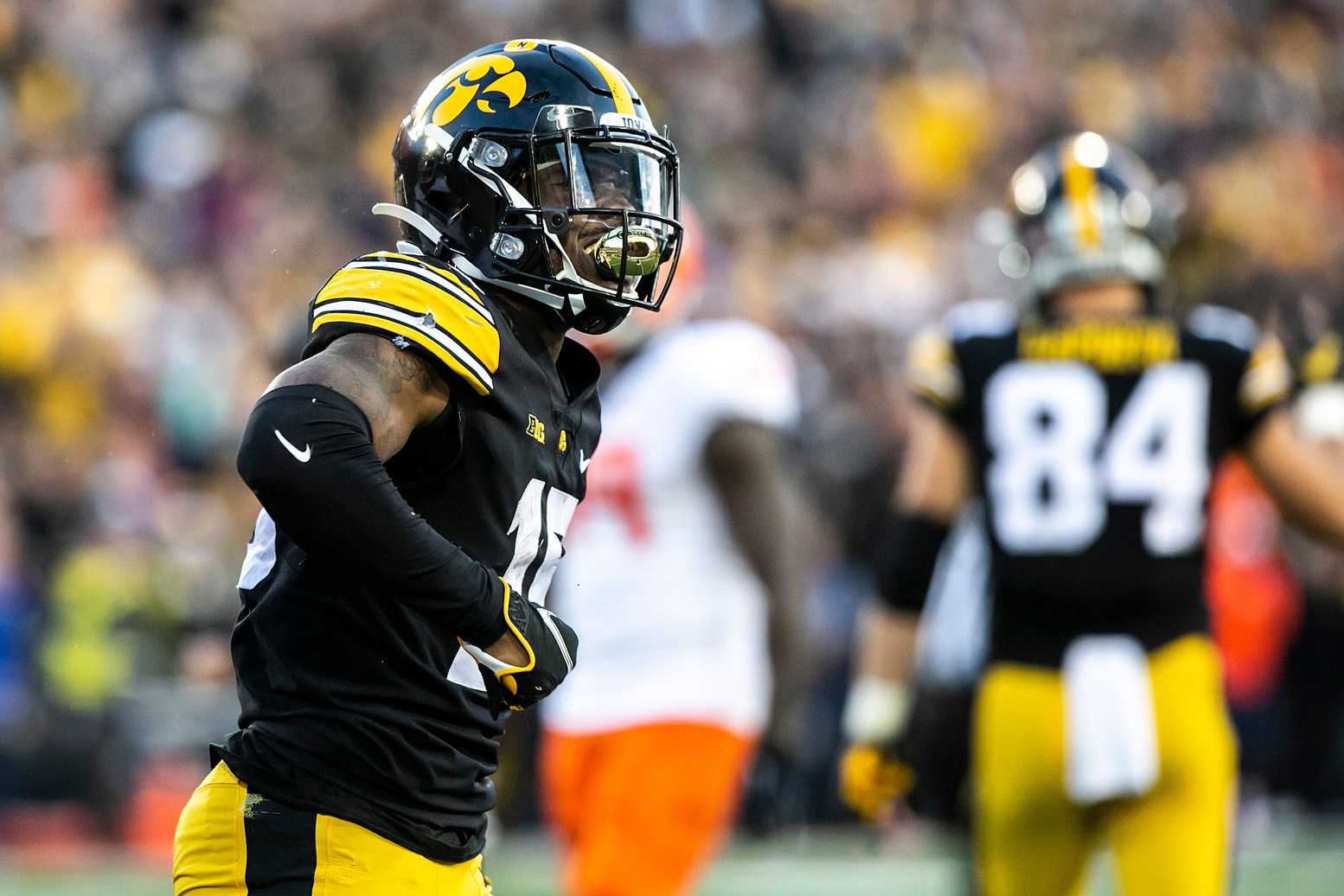 His feet are super quick—he was in his bag against Maryland (2021) with some hard-stop cuts and a spin near the LOS to break free of tackles. He does well to redirect and he’s got a very dynamic base. His press to the line of scrimmage shows sufficient cadence to ensure he’s balanced if the point of attack hasn’t been won.

He wins as a pass-catcher and has shown the ability to win both inside on lead, counter, and dive, and outside on pivot pitches and wide zone. He’s going to translate to a number of rushing offenses but I wouldn’t put him in a “grind it out” offense or ask him to convert short yardage and goal line. He lacks notable power with his pads and his leg drive has not yet consistently moved the pile to churn out tough yards. There have been some struggles in short-yardage and down on the goal line to run with efficiency in converting those opportunities.

Iowa running back Tyler Goodson enters the NFL draft process as an interesting change of pace back who has gradually taken over the primary ball-carrier responsibilities for the Hawkeyes—incrementally taking on a larger share of the workload in each of his three seasons with the program. Goodson’s 2021 campaign was a helpful one for his NFL resume, as he appeared to find a little extra burst and open-field speed this past offseason and showcased his ability to handle a high-volume workload. Goodson’s frame and ability to run with power are going to be limiting factors for his NFL effectiveness, but you can certainly appreciate his willingness to run between the tackles—the Iowa offense has him well prepared for life in the NFL and should allow him to find a niche role as a key cog in an offensive backfield. His immediate impact could well be dictated by special teams opportunities and as a pass-catcher; his 70 career receptions often showcased a good ability to create separation against linebackers when running out of the backfield. I don’t envision a full-time starting running back role for Goodson in the NFL barring injuries to the rest of a running back room, but his hands, foot quickness, and agility make him someone who has a lot to offer with the right complementary pieces around him.

Vision: Goodson has been exposed to a number of rushing concepts—both zone and gap/power have held a role in the Iowa running game. He shows good vision to bend back on zone concepts if faced with cut-off penetration. In gap schemes, he will stay firm on the tracks and follow his lead blockers. He has effective second-level anticipation in open space.

Contact Balance: He has a smaller frame and he doesn’t run through traffic with a lot of push. His ability to contort and slip around hits is notable, but this isn’t the kind of player who is going to go out and earn you a few yards after contact with any level of consistency. He’s built angularly and doesn’t have a dense frame to absorb contact.

Durability: Goodson was a timeshare runner for his first season before grabbing a 2:1 split of carries in 2020 and then exploding with nearly 300 touches in 2021. He set career highs in every significant statistic but it is worth mentioning that his per-touch efficiency dipped when cast into the featured role. Yards per touch was down (0.9 YPT) and scoring was down as well (7 TDs on 287 touches versus 7 TDs on 158 touches in 2020).

Explosiveness: This appears to be a significant area of growth. Goodson in 2020 was frequently caught from behind and struggled to “put away” runs with consistency, but he showed good juice here in 2021; his open-field burst was much better. I thought his open-field opportunities were consistently converted into scores on the games I watched—pairing well with his short-area agility.

Elusiveness: He can be slippery in head-up situations and equally hard to cut off and fill against when the flow of the play is stretching out the point of attack.

Passing Down Skills: I like him a lot in a pass-catching role thanks to his early usage at Iowa that often featured swing routes, screens, Texas routes, and shallow crossers. Goodson showcased good hands in all scenarios to catch the football cleanly and shift his eyes north up the field—Iowa even split him out wide in empty and asked him to run hitches (with targets) on the perimeter. All that said, I would love to see some added consistency and cleanliness to his reps in pass protection, otherwise that may be a limiting factor on his role as a specialist back in the NFL.

Discipline: He does well when given lead blockers to put his head down and challenge the hole. Quick penetration in zone, however, can yield some really nifty cuts but unproductive carries, spending too much time dancing in the backfield and allowing defensive pursuit to close in around him. Would like to see a little more willingness to take the one or two-yard gain and not try to pull rabbits out of hats and lose yards.