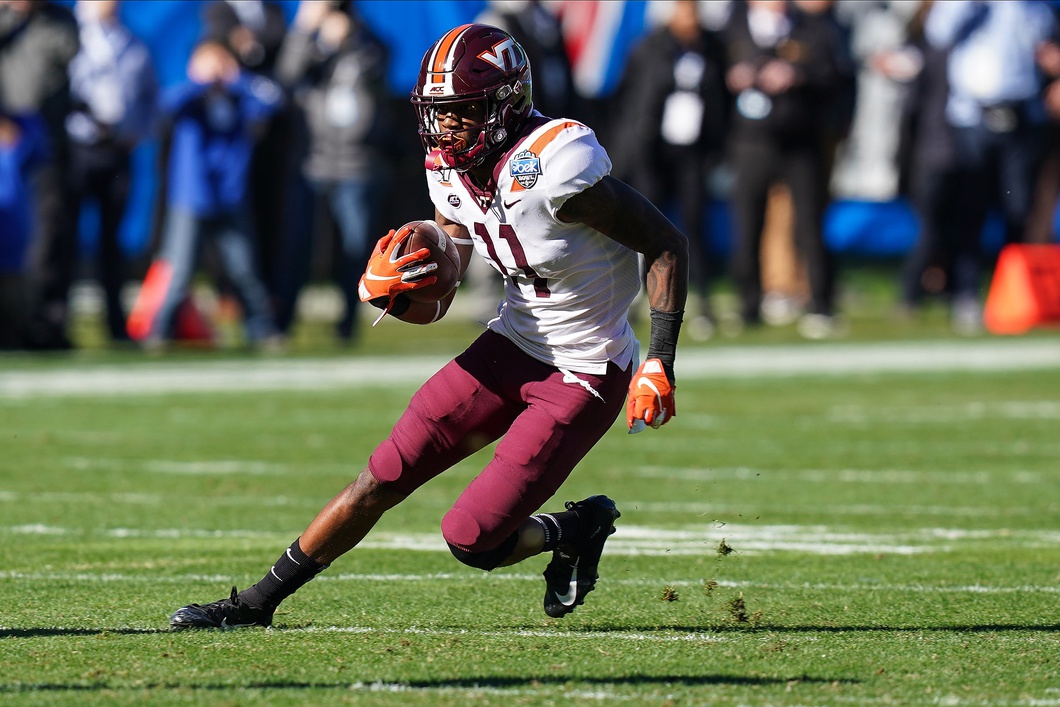 Turner’s ability to play the ball in the air is one of his top traits. The game slows down for him at the catch point and he does well to track, concentrate, and put himself in position to attack the football. He has a strong above-the-rim game and features outstanding body control and sideline awareness.

Despite inconsistent quarterback play throughout his career, Tre Turner leaves the Virginia Tech program top five all-time among Hokies receivers for receiving yards and receptions. In addition to playing football, Turner was a standout basketball player in high school and is the brother of P.J. Hairston, who was a former first-round pick of the Charlotte Hornets after playing college ball at North Carolina. Turner is a versatile receiver with the ability to win down the field, attack the intermediate areas of the field, and create with the ball in his hands. He is a smooth route-runner and he glides when he opens his stride, creating strong vertical push in his route stem. Turner features natural hands, terrific ball skills, and outstanding body control. He makes good route adjustments on the fly and has excellent spatial awareness. When it comes to areas of growth, Turner will need to diversify his route tree and I believe he would benefit from additional mass and functional strength, which would only be an asset to him at the line of scrimmage, the top of routes, at the catch point, and as a ball-carrier. Turner has the makings of a top-three option for an NFL passing game with inside/outside versatility and appeal at all levels of the field.

Ideal Role: Inside/outside WR that is a top-three option

Route Running: The Hokies offense feasts on spacing, so there is plenty of room for Turner to develop and diversify his route tree. I do love the way he generates vertical push in his route stems to set up his route breaks. He is smooth in and out of breaks but I do like him best on the vertical plane.

Hands: Turner has secure mitts and he routinely plucks the football away from his frame and hangs on through contact. He makes catches that are high in degree of difficulty and hasn’t had many issues with drops throughout his career—although he isn’t immune. He has been victimized by several fumbles throughout his career and that is worth noting.

Separation: Turner is a sound route-runner that has good acceleration when pushing vertical and is smooth in and out of breaks, which leads to separation. I like his ability to make good adjustments on the fly and sit in zone to make himself available to the quarterback.

Release Package: Turner showcased good variance with how he gets off the line of scrimmage, with the footwork and hand technique needed to clear press. With that said, he only has modest length and a narrow build, which creates some challenges with contact balance. He has plenty of experience working from the slot and taking advantage of runways and dealing with corners that play on the line of scrimmage when he’s lined up wide.

Run After Catch: Turner is creative with the ball in his hands and fully capable of producing after the catch. He wins due to his ability to catch the ball in stride in addition to good field vision and acceleration. The Hokies weren’t shy about giving him chances to carry the football, averaging 9.6 yards per carry on 51 attempts across four seasons.

Football IQ: Turner’s ability to play inside and outside, and appeal attacking all levels of the field speaks to his football intelligence. I think he has excellent spatial awareness and makes terrific route adjustments. He sees the field well and has good overall instincts as a receiver.

Versatility: Turner is a fully capable slot and outside receiver with playmaking ability to all levels. He can win down the field with speed and ball skills but also create for himself after the catch. He has very little experience on special teams but does bring value as a blocker.

Competitive Toughness: I love the way Turner competes. He will make tough catches in traffic and compete in contested situations. He competes with the ball in his hands and gets his work done as a blocker.

Big Play Ability: Turner has proven his big-play ability at Virginia Tech by averaging more than 17 yards per reception and nearly 10 yards per carry. He was able to achieve this despite highly inconsistent quarterback play for the duration of his tenure with the Hokies. Winning down the field should be a big part of his role in the NFL.